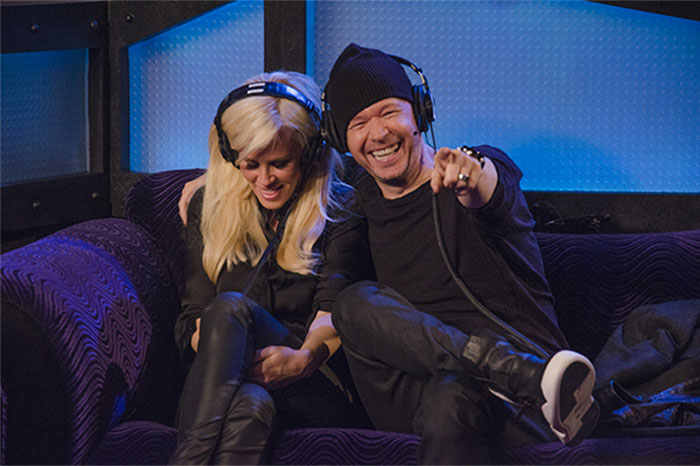 Howard welcomed Donnie Wahlberg and his wife Jenny McCarthy into the studio on Monday for some fun with Wack Packer High Pitch Erik, but before that the King of All Media sat the actors and lovebirds down on the couch for a wide-ranging conversation.

Howard had heard Donnie’s brother and fellow Stern Show veteran Mark Wahlberg missed the Wahlberg-McCarthy nuptials and Donnie said it was because Mark’s doesn’t get much time off and he had instead chosen to celebrate his daughter’s birthday. Donnie couldn’t blame his brother. “It wasn’t personal,” Donnie said, adding that he understands if “Mark wants to spend that day with his daughter instead of spending it with me and my wife.”

Donnie insisted there was no rift between the two and even spoke nostalgically about helping Mark get his start by signing him to Interscope Records.

Both Mark and Donnie started off as musicians, but as their careers progressed they both dove headfirst into acting. Mark apparently wanted to distance himself from being the rapper Marky Mark, which Donnie said may have had some small part in them growing apart.

Though they’d drifted apart a bit over the years, Donnie revealed their new hit reality TV series “Wahlburgers” has been in many ways a blessing for their relationship “‘Wahlbugers’ has been great for me and Mark because it’s forced us to work together more and communicate more,” Donnie said, adding, “Mark was sort of reminded more of my business acumen.”

Listen to Donnie tell Howard his side of the story (below).