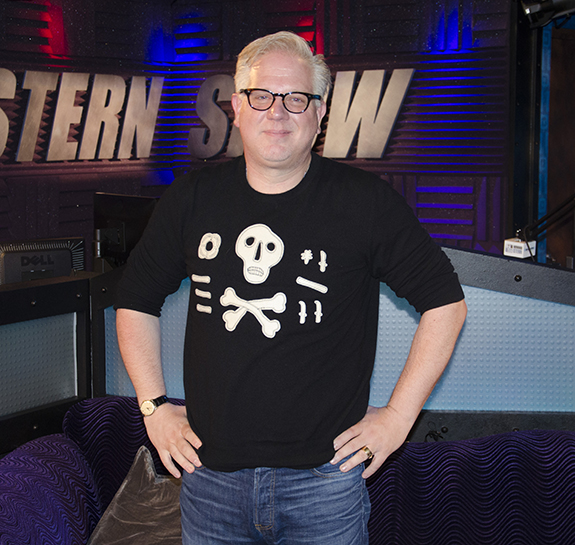 Controversial political pundit (and TV, radio, and Internet host) Glenn Beck made his first visit to the Stern Show this morning with an agenda geared at finding common ground with Howard.

“One of the reasons I’m here today is because we’ve got to stop, man. We have to find the people who may vote different, may be different, have different philosophies – but we’ve got to sit down with each other and talk,” Beck sounded off.

Clearing up some confusion after being branded a “GOP guy,” the former Fox News personality went so far as to say that he in fact hated the GOP, instead branding himself a libertarian. “I hate them because they’re doing the same thing as the Democratic Party does, just at a slower speed … They’re enriching themselves. They’re passing laws that they don’t have to abide by.”

Speaking of Fox News, Howard was curious about Beck’s departure (which he described as a mutual decision). In reality, it seems to have had more to do with his off-air personality than his on-air counterpart. “I really had a problem with the hatred,” he told Howard and Robin. “Look, I grew up in an alcoholic family and I was the guy who just kind of made the family work … So I don’t like conflict. Like Bill O’Reilly – he loves conflict.”

Digging more into his personal life, Howard joked that they were near opposites in lifestyles – Glenn is clean-cut on the air and had a crazy personal life, while Howard has his antics on-air and lives like a monk at home.

One thing they could agree on was their love of radio. “Radio is the most powerful medium. It’s just you and the listener,” Glenn offered. Howard agreed adding that he could think of something at night and then get on in the morning and do it. “No one else in show business can do that.”

While people like Beck and Howard make a great living in radio, they both noted its treatment as a sort of ugly stepchild of the entertainment business with a lot of people hired solely for their deep voices (despite offering little to no entertainment value). Not everyone though.

“This is not going to come as a surprise to you or the listeners, but, I mean, you’re a genius. You were so far ahead of the curve,” Glenn praised Howard.

Radio aside, the two did find some tension on points like women’s rights and Beck’s survivalist antics. Listen to some clips for some more highlights from today’s show. And check out Glenn’s very own network ‘The Blaze’.