What got left on the cutting room floor? 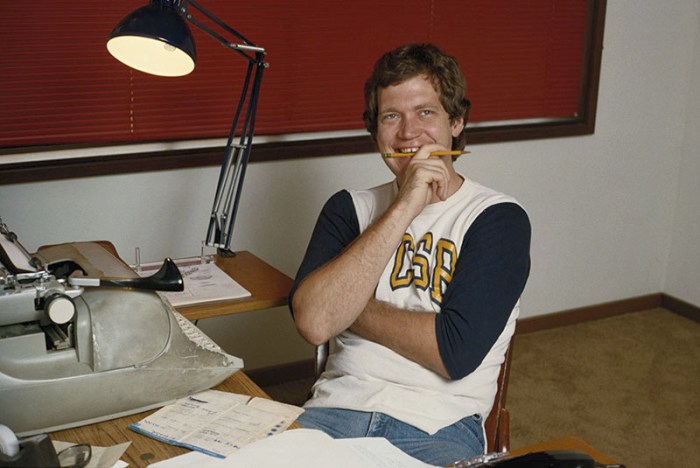 Howard read an interesting article about “The Late Show with David Letterman” and some of the awesome-sounding bits that, for one reason or another, never made it on the air. He read a few of them to Robin:

-Dave and Merrill Markoe and all the guests do the whole show hooked up to lie detectors.

-Dave dresses up for Halloween as ‘That thing on Aaron Neville’s forehead.’

-Hook announcer Alan Kalter up to a machine that would deliver a shock every time a joke bombs.

-Have a behavioral psychologist stand to the side of the stage and periodically check in with him about Dave’s psyche.

-Blindfold Dave’s stage manager Biff and ask him to identify a Madame Tussaud’s wax figure of a celebrity using only touch and smell.

-A bit called ‘Don Rickles Goes to the Zoo’ where Rickles hurls insults at animals. (Dave admitted this would’ve been tremendous and he would do it today).

-David Letterman himself wanted to install a zip-line from the third balcony down to the stage and start the show on a zip line. It never went anywhere.

This got Howard thinking about all the great bits that we have attempted to do but for some reason or other (often times former K-Rock General Manager Tom Chiusano*) they never made it to air.

-The GILF Contest – A Grandmother I’d Like to F*ck

-Howard chloroform’s Richard, takes his clothes off and moves him to a second location, where he wakes up

-Benjy Bronk wanted to roast a kid with cancer

Oh, the shows that could have been!

*To be fair, it wasn’t always Tom’s fault. Sometimes we couldn’t find a sponsor for a particular bit or there were actual legal reasons why we couldn’t actually do it on air.