The Wack Pack Is In Full Force 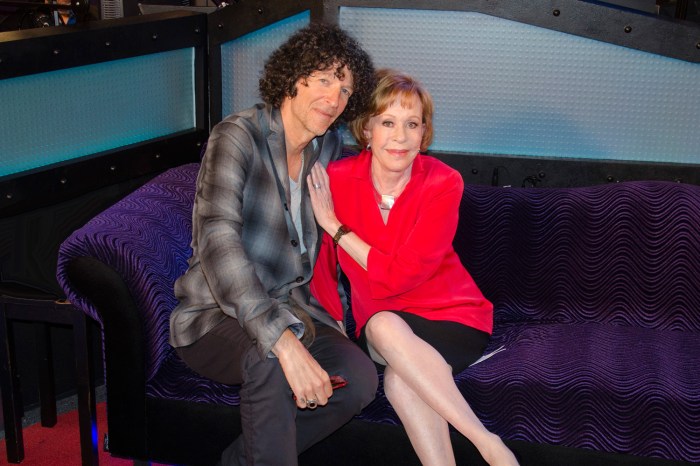 The legendary Carol Burnett stopped by for her first-ever interview with Howard and was as entertaining as ever, remembering stories from the past and reflecting on her future legacy. Check out some highlights below!

The Tough Job of Being a Mother

Carol recounted her own rocky upbringing with two alcoholic parents who both wanted to make it in Hollywood — and thus left her with her grandmother. Along with the effect this had on Burnett, she drew parallels to her own parenting style and how she sought to be a “Loretta Young” type of mother to her three daughters, not letting them see her cry or get upset and nearly acting around them. “It was terribly wrong because they didn’t think I was human,” she explained.

Still, Carol maintained that growing up with her “Nanny” turned out to be incredibly influential for her later career. And her Grandma was also of course the inspiration for Carol’s ear-pull-sign-off.

Origins of “The Carol Burnett Show”

While it became one of the most iconic variety shows of all time, Carol almost didn’t even do the show. She had gotten a great contract negotiated years before where CBS had to guarantee that within the first five years, if Carol decided to do a variety show, they had to put at least 30 one-hour episodes on the air whether they wanted to or not.

Carol said that she never thought she would actually want to do it though. And then, in the last week of the 5th year, she felt her career had gone a bit cold, so she decided to pull the trigger on it. CBS tried to talk her out of it and instead have her do a sitcom called “Here’s Agnes,” but Carol stuck to her guns, telling Howard that she didn’t want to do a sitcom. She really wanted to do a show where she could do something different each time.

The cast wanted it to be like a live show, so even though it was pre-recorded, they didn’t do any extra takes unless some sort of catastrophe happened — that’s why you frequently saw them laughing at each other.

After 11 historic seasons, Carol also confirmed she was the one to actually pull the plug on the show, explaining she wanted to end it before they made her do it.

One incredible story Carol recalled during the show was of a couple she met during an amateur performance she was doing at a fancy black tie event. The couple approached her and offered to pay for Carol to go to New York and follow her dreams. The husband wrote Burnett a check for $1,000 and told her she had to pay it back in five years if she was able, with the stipulation being that if she became successful she had to pass it on.

Though she repaid the man and wrote him a few times, Carol didn’t hear back from him until “The Carol Burnett Show” had been on the air for a few years. He maintained that he never wanted to be identified.

Be sure to listen to the full interview On-Demand and also check out the first five seasons of “The Carol Burnett Show,” released for the first time since they aired in “The Lost Episodes” box set.

Vulture Declares What We Knew All Along