Highlights from the Coldplay frontman's 2011 chat with Howard 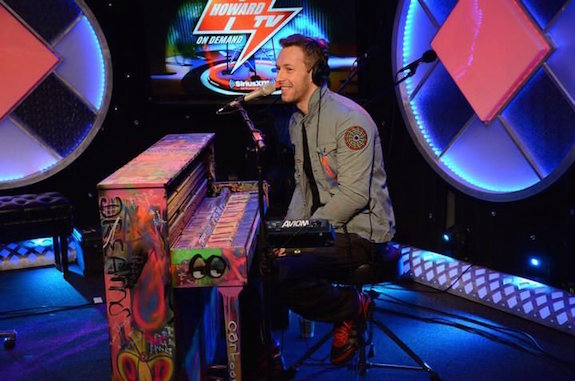 Coldplay frontman Chris Martin is in the studio Wednesday morning to chat with Howard. During his last appearance on the Stern Show in 2011, Chris talked about everything from his humble beginnings as a musician to playing at Steve Jobs’ memorial service.

Here are some of the biggest revelations Chris made…previously on the Stern Show.

On Starting Out as a Musician

Howard asked Chris about his origins as a musician, which stemmed from Chris taking to the Martin family piano at a young age, though he never took lessons. When Chris knew he wanted to go for it, his parents were supportive, if cautiously realistic. “My dad said ‘it’s unlikely to happen, but you should have a go,” explained Chris. “He said ‘don’t drop out of school,’ but he never said ‘don’t do that.'”

Chris wrote his first song when he was only 11. Said Chris: “It was actually about people being more obsessed with Princess Sarah Ferguson’s tits than what was really happening in the world.” Howard was impressed by the social commentary coming from an 11-year-old.

When Chris and Coldplay first started playing together in clubs, it was soon clear that they were on to something real. “I had a moment of thinking we were good because we were very popular, and someone told me that the Nazis were popular for awhile,” said Chris, “so, my self esteem went right back down again.”

Howard asked Chris what the process was for writing Coldplay’s songs.

Seated at his piano, Chris told Howard: “Sometimes I don’t get [a tune] in my head, sometimes I just go and…like a fisherman, just sit there and just fuck around for hours and hours.” Chris demonstrated by playing some off-the-cuff chord sequences on his piano.

“What separates a solo artist from someone like me is they do everything from conception to birth, as it were – every part of the arrangement,” Chris said. “Whereas, I might get three chords and have a song over it, but it hasn’t yet been arranged and fleshed out and doesn’t have a guitar riff. I don’t think anything’s finished right until everybody’s put their part on, out of the four of us.”

Howard asked Chris about what happens when it comes to splitting publishing and royalties. “We split it 20-20-20-40,” Chris said, explaining that he gets the larger cut. “I never told anyone that, but you asked nicely.”

How To Write a Hit Single in 10 Minutes

According to Chris, he knew “Yellow” was a hit when he wrote it. “I think with any of our songs that have gone on to do okay, I don’t really know how they came through,” Chris said. “It’s the old cliche…all the songwriters say that the good ones just come through you.”

“Yellow” took Chris 10 minutes to write, and it sort of happened by accident. He tells Howard: “We were in Wales and my microphone was broken or something. I was waiting to record something else, and I was thinking about Neil Young and I was starting to do a Neil Young impression just to try and make everyone giggle.” When Chris started playing, “Yellow” came out, as he demonstrated by playing the opening chords and singing in his Neil Young impression.

Howard asked Chris if any songs that he thought were terrible became Coldplay hits. “One,” Chris replied. “A song called ‘Speed of Sound’…I just think we did a shit recording.”

The Meaning Behind ‘Mylo Xyloto’

Howard pressed Chris on the meaning of the title of Coldplay’s 2011 album, “Mylo Xyloto.” Howard brought up the fact that Chris had been telling people the title had no meaning. “It depends who asks me,” Chris explained. “Some people ask me in a kind of aggressive manner, so I’m just like fuck you, why would I tell you? If you ask me nicely I’ll tell you.”

When Howard proceeded to ask nicely, Chris explained: “We took a lot of inspiration from people who paint street art and graffiti and stuff. Everybody going back to Taki 183 and all the New York guys and girls, and we thought we need to come up with like, a tag name. That’s where it came from.”

“The reason we came up with the word ‘Xylo’ was because of xylophone,” Chris continued, “and it was about thinking of creating a character for us as a band that was a musical person.”

The influence of street art extended to Chris’s piano, which was covered in an array of colorful graffiti.

Coldplay had the honor of knowing Apple mastermind Steve Jobs during his life, as Jobs was a Coldplay fan. Chris told Howard: “Before we really knew who [Steve] was, he came to see us play, and he was in the dressing room, and then Dave, our manager, explained, ‘this is Steve’…and we put two and two together.”

“We asked him to tell us how he built his first computer, and that was really interesting,” said Chris.

Sadly, Jobs passed in 2011. “When he died, we went and played at Apple headquarters,” Chris told Howard. “We’d never played a memorial before, so it was strange to think of what [songs were] appropriate, what’s not appropriate, but it was cool to do.”

Tune in for Chris’ latest interview Wednesday on the Howard Stern Show.