Kicking off the morning with a bang, the cleaning lady who tidied up after Beetlejuice shit on the bathroom floor announced today’s guests: Meghan Trainor and Medicated Pete’s penis!

“Lovely woman,” Howard said before telling listeners that Medicated Pete was already at the studio and would be coming in to show Robin Quivers his penis. 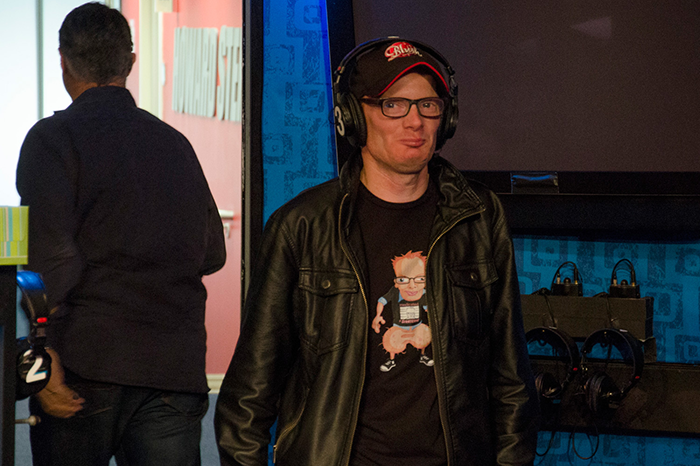 Before beginning the main event, Howard wanted to catch up with Medicated Pete and play some unaired interviews the Wack Packer conducted on St. Patrick’s Day at a bar.

Pete is heard in the recordings trying to ask drunk revelers questions (“What’re you into? What are your interests?”) and attempting to solicit hugs and kisses from women – who unceremoniously turn him down. “Medicated Pete Jennings we were calling him after this,” Howard joked.

Captain Janks called while Pete was in the studio and explained why he thinks Pete is gay: “My gaydar goes off big time.”

Pete rejected Captain Janks’ claim, telling Howard about he was actually trying to meet women through Tinder. He finally scored a date after using the app for eight months, but they only went out once and he was unable lock down a second date. There’s still hope, though, as Pete reportedly has a new Tinder date on Friday. Stay tuned for updates on that.

Pete also revealed that he is still unemployed, but has been handing out resumes left and right. His primary experience? The Stern Show, of course!

Gary Dell’Abate emailed a guy who once employed Pete at a gym to see what happened. The employer responded, saying Pete had been “counseled” about staring “oddly” at customers, but otherwise the gym had no issues with him. After that, though, the employer said Pete just stopped showing up.

Pete explained a medical emergency had landed him in the hospital for awhile and, after he got out, he had assumed too much time had elapsed, so he never returned to work at the gym. He also told Howard that he is no longer taking his medication, as it was causing hallucinations.

As listeners may remember, Medicated Pete dated a girl with cerebral palsy for a while, but her parents weren’t supportive of their relationship, so the girl dumped him. “I got discouraged,” Pete told Howard.

Finally, before getting down to business, Howard reported that Pete has stopped singing his signature song, “Purple Rain,” in the wake of Prince’s death and has instead taken up U2’s “One.”

Throwing on the karaoke track, Howard invited Pete to show off his skills. He was not disappointed by the performance.

“It’s better than his Prince,” a surprised Robin noted.

“You could panhandle with that on the subway,” Howard agreed.