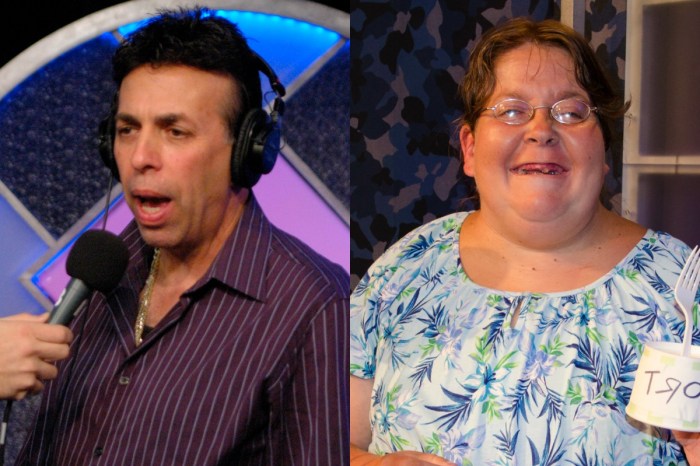 It wasn’t just Howard Stern who was asking questions of special guest Jimmy Kimmel on Monday. Two members of the Wack Pack got to interview the late night host: Bobo and Wendy the Slow Adult.

Jimmy is a fan and frequent gift buyer of Wendy’s and was more than happy to field a few of her questions for him. Her first question inquired about what Jimmy likes to do when he’s not doing his talk show, but it included a long pause in the middle.

“Is she taking lessons from Paul Harvey?” Robin asked.

During her second question, Wendy had to take a phone call and could be heard telling the person on the other line that she was busy doing something. She then managed to ask what Jimmy liked to do while he was at work. Jimmy and Howard just laughed. Wendy also asked if Jimmy had a favorite “Nightmare on Elm Street” movie, but since he doesn’t watch those movies, he couldn’t answer. In case you were wondering, Wendy’s favorite is Part 3, “Dream Warriors.”

Saving her best question for last, Wendy asked Jimmy what his farts smell like, since hers smell like chicken which makes her hungry.

Bobo, who is constantly crafting his own questions for Howard, was also invited to interview Jimmy and was given four days to come up with a few good things to ask him. Even with all of that extra time to prepare, he still managed to come up with nothing but duds.

First, Bobo asked Jimmy about staying with Howard when he visits New York and if he and his wife Molly would ever have sex in one of Howard’s “many bedrooms.” Jimmy found it curious that Bobo would presume that Howard had many bedrooms at his house, considering he’s never been there. Jimmy did answer though that he did not have sex at Howard’s during this most recent visit.

“The baby throws a little something extra into the mix,” Jimmy explained.

Next, Bobo asked Jimmy if he’s ever had a guest on his show where “things had gone horribly wrong in the green room” when he went to check in on them. Howard didn’t think Jimmy would even have an answer for that, and he was right.

“I’ve never gone to check on a guest in the green room,” Jimmy said.

Bobo also wanted to know why Jimmy chose to single out Matt Damon during his nightly sign off on his late night show. Jimmy said Bobo could probably just Google that, but explained, “He was the first name that popped into my mind.”

And then came time for Bobo’s closing question – the one he was waiting to ask.

“I’m curious to know, what is the preparation for when the President comes on?” Bobo inquired. Other than a pre-interview visit from the Secret Service so that they can sweep the studio, Jimmy said there aren’t many special arrangements made for presidential visits. However, Jimmy admitted there was something different about his sit-downs with politicians versus when a celebrity comes on his show.

“Politicians, there are no conditions on the interview, where [with] celebrities, there almost always are,” Jimmy told Howard.

Jimmy will welcome back presidential nominee Hillary Clinton to his show on Aug. 22. If only the Wack Pack was allowed to ask her some questions.