Howard was “completely flummoxed” this morning because there was so much excitement in the studio – and a particularly chatty Marfan Mike assisted in explaining who the hubbub was for: Metallica!

“That’ll be awesome,” Howard said, telling listeners the band will be in to perform a few songs.

Last time Metallica performed live in the studio, Stern Show staffer Richard Christy said he would do anything to be allowed to sit in and watch, which led to him get a smegma mustache courtesy of Sal Governale. This morning, Richard informed Gary Dell’Abate he would lick his penis for the chance to see Metallica again. 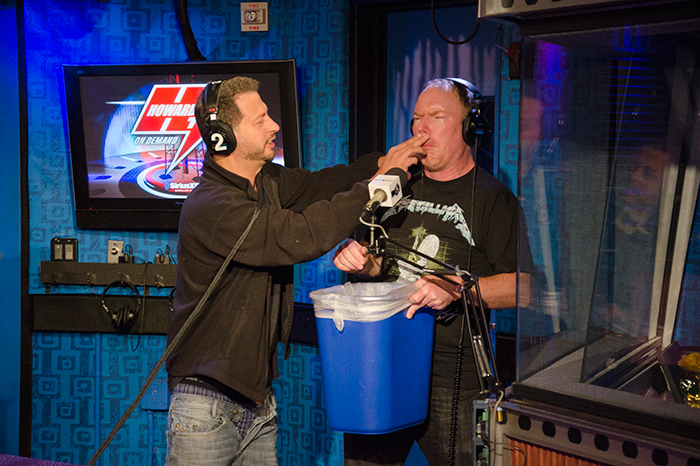 Richard gets a “smegma mustache” in 2013 to see Metallica Photo: The Howard Stern Show

Gary wasn’t sold on the wager, though, since he wasn’t quite sure what he was winning (despite Richard’s insistence that he had a “soft” tongue). Howard instead suggested that Richard eat one of Sal’s boogers. Richard immediately started retching and then he recounted a story of getting tricked into drinking a loogie in a cup of soda when he was a kid, adding that he hasn’t been able to think about boogers without gagging since.

Fascinated, Howard posed a tough hypothetical to the Kansas native: Gary’s load or Gary’s booger? Amazingly, Richard went with the former: “I’ve never had a bad experience with a load,” he explained. “I’ve never had a good one either,”