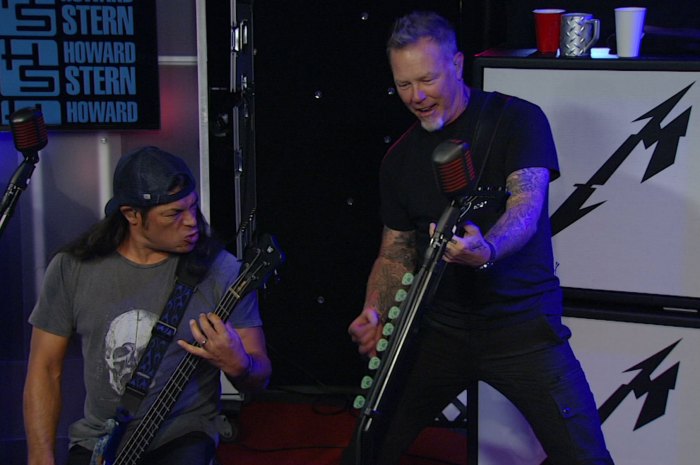 Stern Show fans were rocked out of bed on Monday morning with the return of Metallica. The eminent heavy metal band was back to perform a few of its hits live for Howard and Robin, and they did not disappoint. James Hetfield, Lars Ulrich, Kirk Hammett, and Robert Trujillo were all on hand to talk about all of the hard work they put into their new album “Hardwired… to Self-Destruct.”

“There’s no shortage of ideas,” Robert told Howard, explaining that other bands often turn to outside writers to help them create music when their own creative well dries up. “Our thing is that there’s too many ideas … it’s a blessing and a curse.”

“You don’t retire as an artist. You just keep doing what you do,” James added. “We know that route, where you don’t make any more albums and you kind of just end up on the fairs playing your hits. That is an option but we don’t want that option right now.”

Metallica got the morning started with a live performance of their heavy metal staple “Master of Puppets.” James can still remember playing “Master of Puppets” in a “stinky little garage” in ’84 or ’85. Now he plays that song to sold out stadiums, including little kids that he sees in the crowd singing along.

Next, Howard asked the band what the inspiration was for their hit song “Sad but True.”

“‘Sad but True,’ to me, at least, is a duality,” James said. “Each one of us has a light and dark side and, sometimes, the dark is louder than the light part.” The song, Lars explained, was created after Metallica’s 1988 album “…And Justice for All.”

“A lot of those songs were really complicated in concert,” Lars told Howard about the tracks of “…And Justice.” He and James decided their next offering should include simpler, shorter songs. With that in mind the two of them wrote “Sad but True,” which wound up on their 1991 album “Metallica.” A shorter song doesn’t always mean a faster song to write, however.

“The hardest thing, usually, they say, is to write a short song. It’s easier to write longer songs,” Lars explained.

Finally, the band finished their Stern Show visit with a performance of their new single “Hardwired,” and it was only the second time they’ve ever played the song live. The band told Howard how they opened U.S. Bank Stadium, the new home of the Minnesota Vikings, just last month.

“This was the last song that we wrote for the new album,” Lars said. “We had the whole record pretty much done and then we decided … that we needed a short, fast opener for the new album and James and I put this together in about a week.”