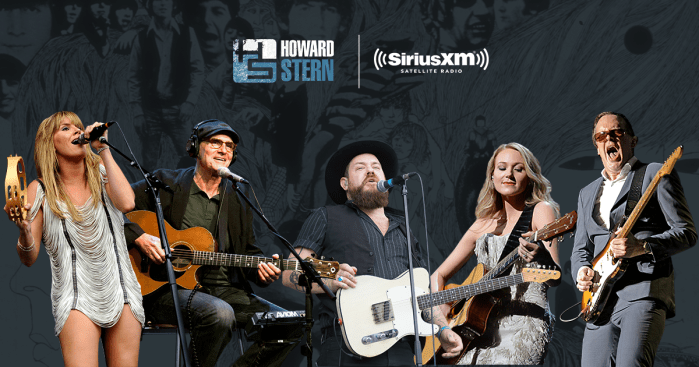 Fifty years ago, the Beatles released their groundbreaking album “Revolver.” To mark the anniversary, the Howard Stern Show recreated all 14 tracks from the album with a diverse group of world-class musicians in an exclusive special only heard on Howard 101.

You can check out all of the artists involved as well as the songs they remade (below), plus you can still hear the special On Demand and replaying on Howard 101. 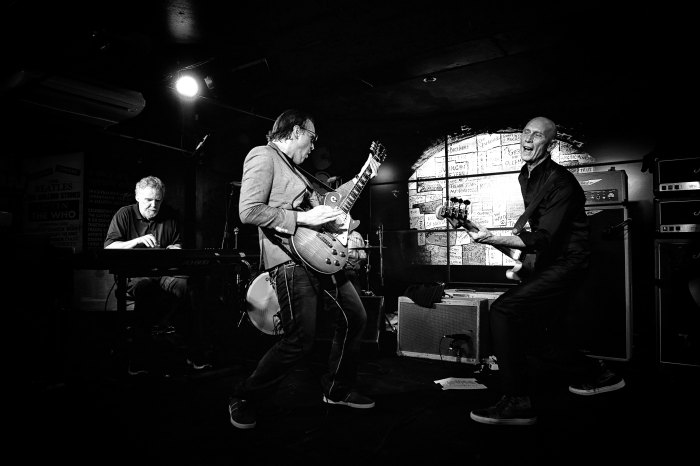 Top blues performer Joe Bonamassa leads off the tribute with a cover of “Taxman,” the first track on “Revolver.” George Harrison reportedly wrote the song after realizing 95 percent of his income was going to the actual taxman.

Joe, along with longtime “Late Show with David Letterman” drummer Anton Fig, recorded live at Cavern Club in Liverpool, the Birthplace of the Beatles.

“The music of the Beatles has withstood over a half of a century and still surpasses any followers’ attempts of recreating those sounds, and especially those songs,” Joe says. “‘Taxman’ was a blast to play live at the Cavern Club in Liverpool U.K. – the place where it all started.” 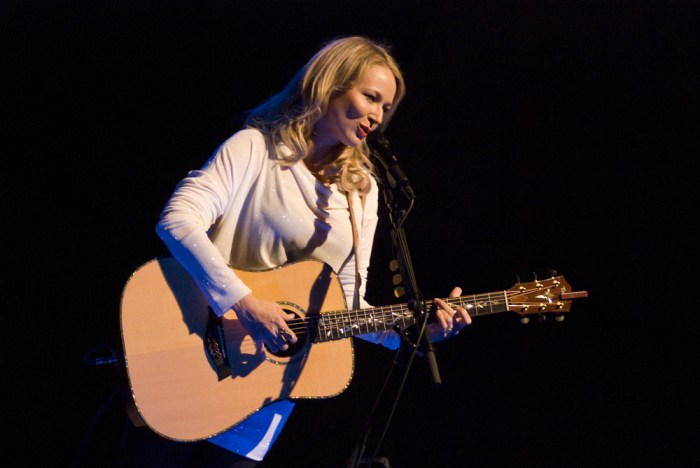 In 1966, the Beatles won a Best Contemporary Pop Vocal Performance Grammy for “Eleanor Rigby.” Jewel’s version captures the production style of the original, but adds her unique, folksy vibe.

“I have always loved the song ‘Eleanor Rigby’ but never thought I would take a shot at redoing it,” Jewel says. “It’s a tall order to tackle one of the great classics, I feel. This lyric style has always spoken to me – very character driven and quirky.

“When it came time to record the song, I had been listening to a lot of Marlena Dietrich and the German burlesque era stuff, so I went to my friend Jonathan Yudkin to record it with me at his house. He plays every single instrument on the track. We slowed it down and put a slinky burlesque or French cafe type vibe.”

Check out more from Jewel at her website: jewelneverbroken.com 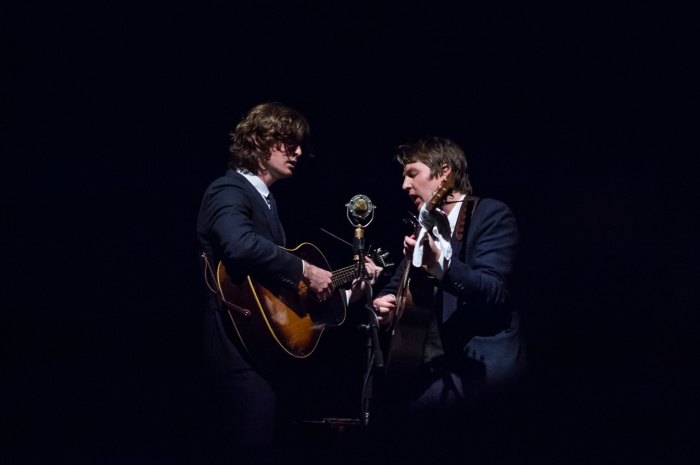 “I’m Only Sleeping” is one of three tracks that did not appear on the original U.S. release of “Revolver.” The Beatles were said to have spent 9 hours recording the backward guitar solo with only 27 seconds of it going into the final version.

Here’s what the band has to say about recreating “I’m Only Sleeping”:

“It’s difficult to cover The Beatles. So many of their arrangements, instrumentations, guitar solos, are so iconic that changing any of it can feel counterproductive or even sacrilegious. We wanted to record ‘I’m Only Sleeping’ with a brand new two-part vocal harmony and a completely different instrumentation from the original in a way that nevertheless hit all the signature riffs and melodies we’ve all become nostalgic for over the last 50 years.

“We were excited to record ‘I’m Only Sleeping’ which, at 3 minutes in length, is the longest song on ‘Revolver,’ proving that Lennon was indeed lazy after all. A lot of people think the lyrics are about drugs — psychedelics — but actually John just spent an inordinate amount of time in bed. Later, he turned this voluntary bedridden-ness into a new kind of political activism, but in 1966 he really was ‘only sleeping,’ and decided to say so.”

Produced by The Milk Carton Kids

“Love You To” – Rachael Yamagata 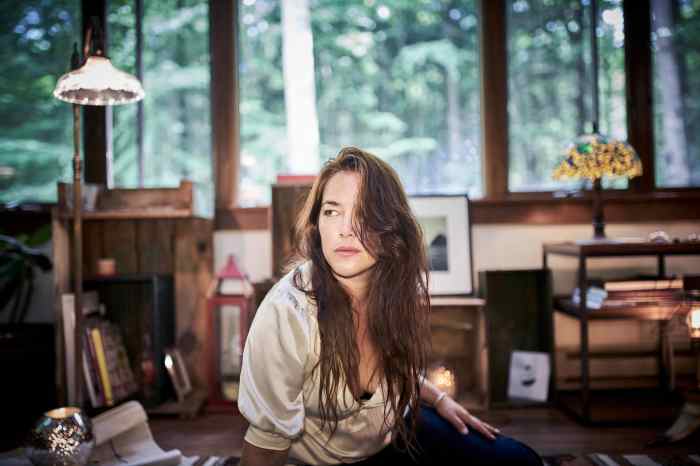 Written by George Harrison after being inspired by Ravi Shankar, “Love You To” famously features a lot of sitar on the original track. The song is reportedly about George’s then-wife Pattie Boyd, whom George married in 1966 – the same year “Revolver” was released.

Here’s what singer and piano player Rachael Yamagata has to say about recording “Love You To”:

“I loved the production challenge of ‘Love You To’ and the lyrical message is right up my alley. I’ve always been drawn to George Harrison. We didn’t have sitars, but I had Zach Djanikian (Amos Lee) who produced and played all of the instruments and of course tracked in his Howard Stern T-shirt. He went to town on the track with engineer/co-producer Pete Hanlon and I had a blast laying a bed of vocals on top of what they created. We went for a bit of madness mixed with angelic dreamscape.”

Produced by Zach Djanikian with additional production by Pete Hanlon

“Here, There and Everywhere” – James Taylor 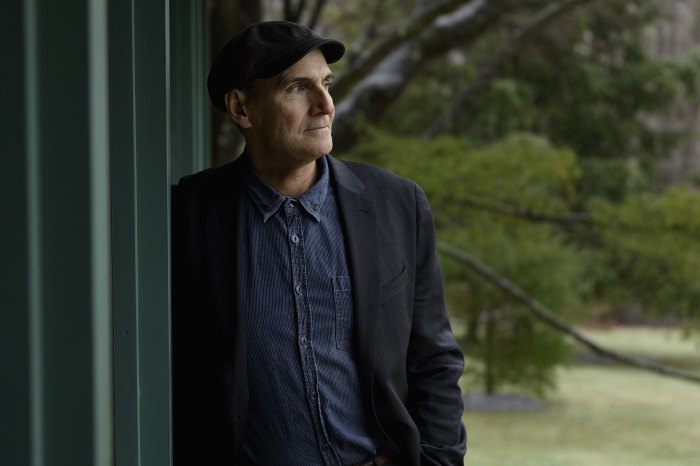 John Lennon supposedly considered “Here, There and Everywhere” one of his all-time favorite Beatles songs. The fifth track off of “Revolver,” Paul McCartney wrote and sang the lead vocals on the song.

James Taylor performed his version of “Here, There and Everywhere” while on the road. In order to get the right acoustic sound, Taylor and his bassist Jimmy Johnson recorded it inside of a hotel closet (picture below). 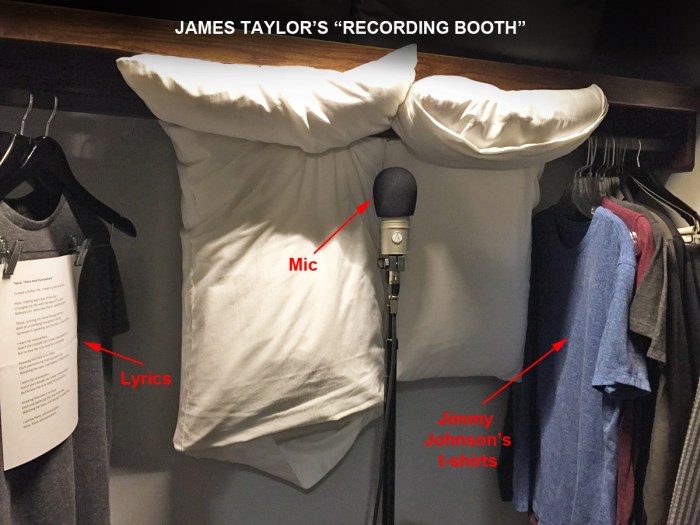 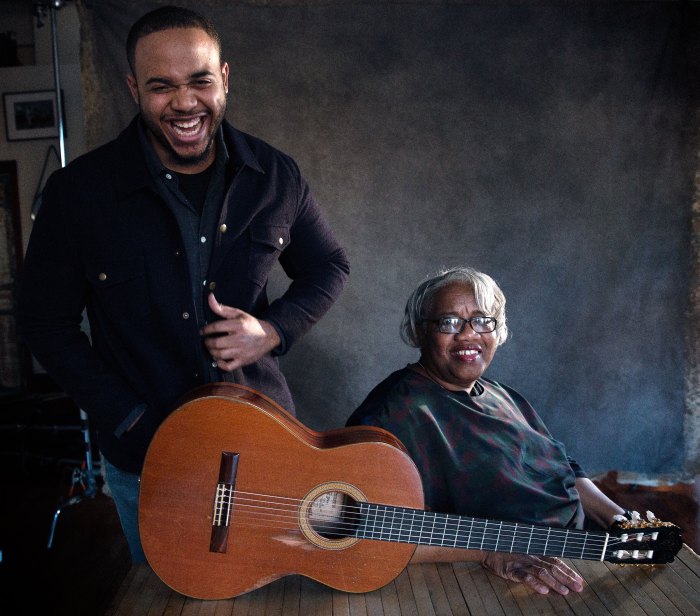 Mother-son music duo Madisen Ward and the Mama Bear hail from Missouri. Here’s what they have to say about “Yellow Submarine” and being involved in the “Revolver” special:

“We love melodies that carry a timeless element, and ‘Yellow Submarine’ is as timeless as it gets. It felt like a song that could be sung as an old classic folk standard; we couldn’t resist giving it a shot.

“I think Howard has come up with a project that is very unique and celebrates music in general. Incorporating various artists to perform songs from ‘Revolver’ is definitely a beautiful statement. One that we’re excited to be a part of, which led to opportunities to work with fellow label mate Jeremy Messersmith. We couldn’t be happier about the brilliance he brought to the project. It was a fun song to sing, and we look forward to hearing the other artists as well.”

“She Said She Said” – Cheap Trick 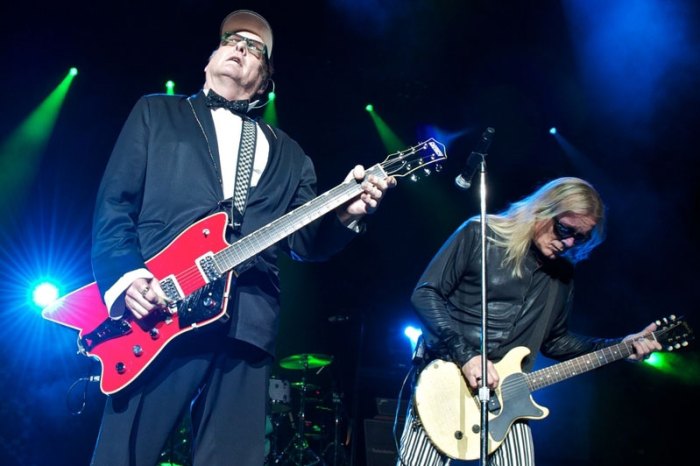 Cheap Trick was the first band to sign on for the Stern Show’s “Revolver” special. They recorded their version of “She Said She Said” with producer Jack Douglas – Howard has been enjoying it ever since. John Lennon wrote the song, supposedly about an acid trip he experienced with the Byrds and Peter Fonda. Legend has it Fonda whispered in John’s ear, “I know what it’s like to be dead.”

Because of an alleged argument in the studio, Paul did not play on this track – George Harrison had to play bass.

Produced by Jack DouglasSpecial thanks to Aaron Smart and Johnny Depp 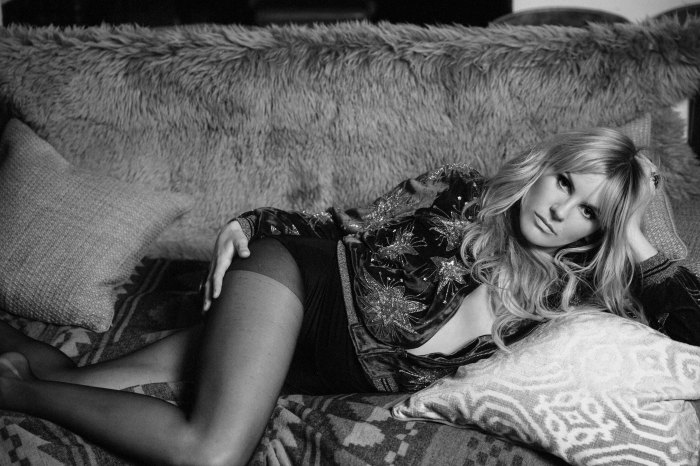 Singer and guitarist Grace Potter covers “Good Day Sunshine,” a song written by Paul McCartney in an attempt to emulate the Lovin’ Spoonful.

Potter says she is drawn to artists who make sonic leaps from record to record and cites the Beatles as one of her biggest influences. Throughout her career, Potter has made her own sonic leaps with her four studio albums. In 2015, she was invited by First Lady Michelle Obama and Conan O’Brien to perform for troops in Qatar (where she was joined on stage by a guitar-playing O’Brien).

“And Your Bird Can Sing” – Gov’t Mule 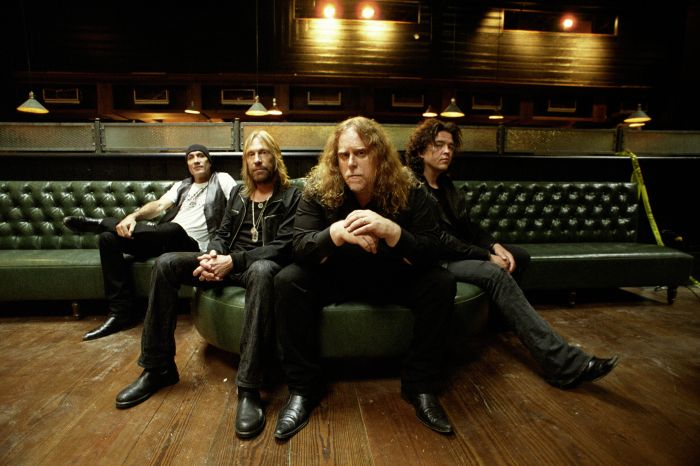 While it made it on the original U.K. release of “Revolver,” John Lennon said that he didn’t like “And Your Bird Can Sing,” calling it a “throwaway” song – it was left off of the initial U.S. edition.

Gov’t Mule is led by Warren Haynes, the longtime member of the Allman Brothers Band. Here’s what Gov’t Mule has to say about covering “And Your Bird Can Sing”:

“We’re all obviously big Beatles fans. ‘Revolver’ in particular was among their many milestones in the way that it represents their changing from a pop band to a rock band. Subject matters were changing with their songwriting and they were on the forefront of what was changing with, not only music, but pop culture.

“Gov’t Mule has performed songs like ‘She Said She Said’ and ‘Tomorrow Never Knows’ in our live shows but had never offered up a take of ‘And Your Bird Can Sing’ until this recording. We wanted to put our own slant on it and it came together rather quickly and turned out great. We’ve since added it to our live repertoire and really enjoy playing it.”

“For No One” – Grouplove 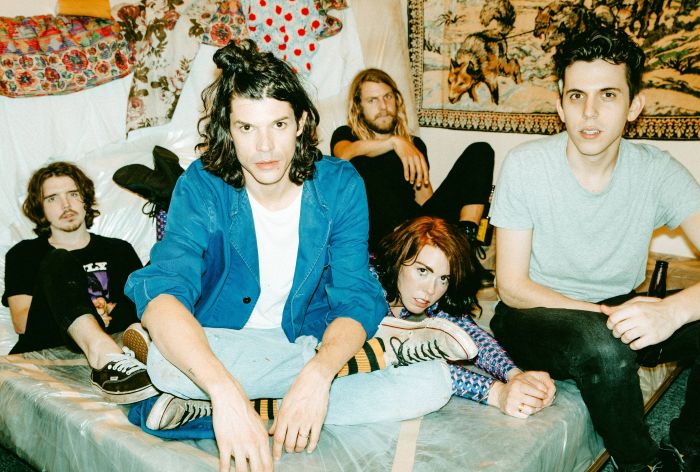 Paul McCartney allegedly wrote “For No One” in the bathroom of a Swiss ski resort while reflecting on relationship with actress Jane Asher. The couple was together for five years and eventually got engaged but never married.

Indie L.A. rock band Grouplove covers the song with their iconic electronic style. Here’s what Hannah Hooper, the band’s vocalist and keyboardist, has to say about performing “For No One”:

“I mean, it’s the Beatles — you can’t just cover them ’cause they’re the Beatles, you know? Nobody can be the Beatles except the Beatles. So we made ‘For No One’ a little bit of ours and theirs. In a sense, we collaborated with the best band ever. They just don’t know it.” 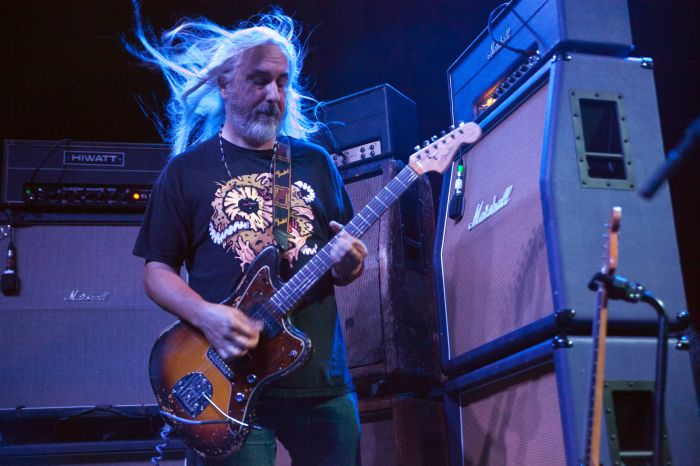 “Doctor Robert,” the first Beatles song to feature overt drug references within its lyrics, was written by John Lennon, with Paul McCartney later claiming co-authorship. The track is about Dr. Robert Freeman, a New York doctor who allegedly prescribed amphetamines to hundreds of celebrities. 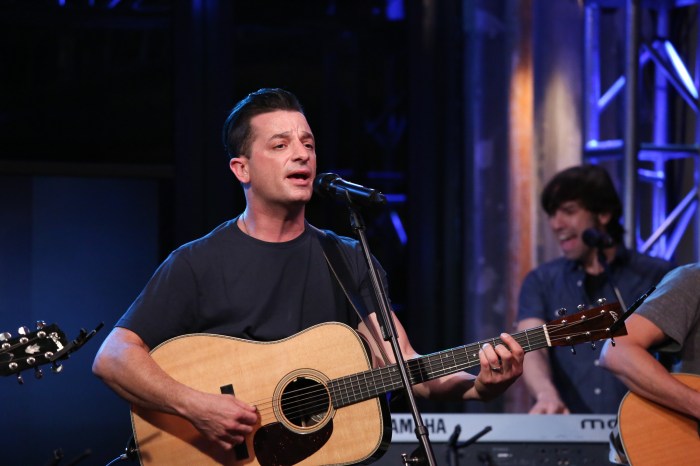 George Harrison wrote “I Want To Tell You,” drawing heavily on his experience with LSD. The song has also been covered by Ted Nugent and the Grateful Dead, but it was O.A.R. that selected it to play in Howard’s studio for the “Revolver” anniversary special.

Here’s what the band says about the Beatles and the album “Revolver”:

“Being in a band of old friends from the neighborhood, it’s easy to identify with the Beatles, even more so during the ‘Revolver’ period. The album sounds like they were having fun taking advantage of the studio, like they’d put in the work, mastered their craft, reached an experimental stage, but on their terms.

“We chose to record the George Harrison song ‘I Want To Tell You’ because, to us, George represents the glue of the band. That’s something we’re always drawn to, that intangible something that makes the group more powerful than the individual. George and his songs always personified that to us. Not to mention the guitar line and singing melody are incredibly George and incredibly genius.” 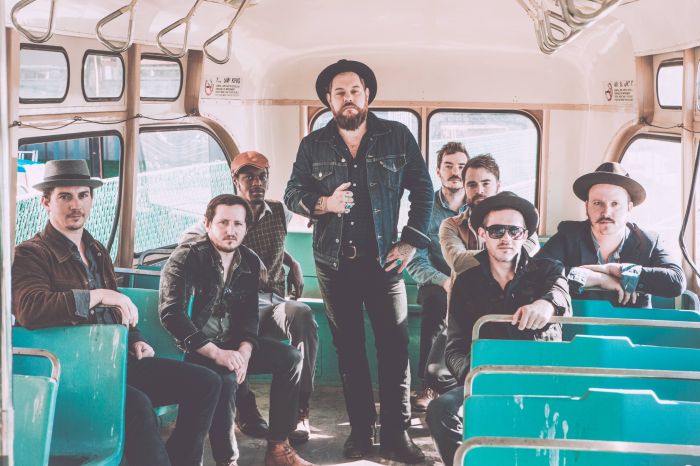 There’s a Motown sound to the Beatles’ “Got to Get You Into My Life,” written by Paul McCartney. Earth, Wind & Fire won a Grammy for their 1978 version of the song by stripping out those Motown elements and replacing them with a blues and rock tune.

Nathaniel Rateliff & The Night Sweats recorded their “Got to Get You Into My Life” cover while on tour in Brussels. Here’s what they have to say about recreating the song:

“We had a blast recording ‘Got to Get You Into My Life.’ Also, my man Paul can sing fucking high. We had to drop several steps for me to hit some of those notes.” 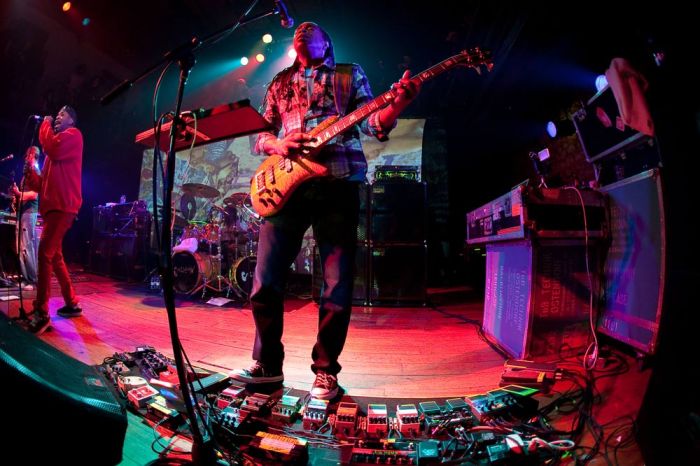 The last song on album, “Tomorrow Never Knows” was in fact the first song the Beatles recorded for “Revolver,” though the arrangement was changed by the time the album was released. Reportedly, the sound engineer mic’d the drums much closer than usual and stuffed a blanket inside the bass drum — that’s now an industry standard.

Living Colour takes on “Tomorrow Never Knows,” a song they say they used to play during soundchecks.

“We experimented with the chords and the rhythm,” Living Colour bassist Doug Wimbish says “Over time, things aligned between our sensibility and take on the song and the concept of ‘Tomorrow Never Knows.’ When Living Colour covers other artists songs, we tend to lean towards songs that might be album versions versus singles. The Beatles classic recording of ‘Tomorrow Never Knows’ offered a very deep, sonic and spiritual approach. It’s a song that is timeless. The message in that song is as real as the sun and the moon – I believe every moment you have now is a blessing.”