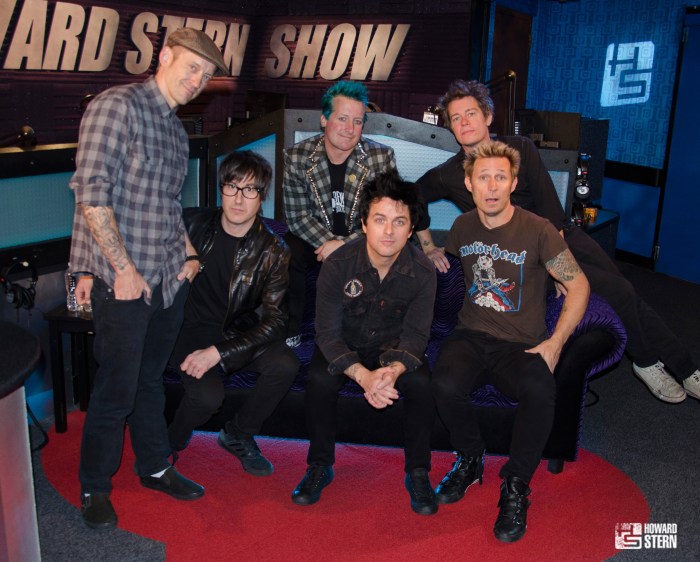 Howard welcomed Green Day back to the Stern Show on Wednesday morning for the first time in 16 years. The band is just as talented now as they were then and are about to release their 12th studio album, “Revolution Radio.” Billie Joe Armstrong, Mike Dirnt, and Tré Cool were all in studio to perform two of their new songs live on air, as well as a few of their monster hits.

After his mom announced that she would be charging him $200 a month to live at home, Billie Joe told Howard that he decided to move somewhere that he could keep living for free.

“I’d moved out of my mom’s house when I was 18 and I moved into West Oakland in a warehouse. It was basically a squat,” he explained. Billie was living with at least 15 other musicians and artists. About a year later, Mike moved into the squat as well.

“We were just young and having a lot of fun,” Billie said. He penned “Welcome to Paradise” about their less-than-ideal living conditions inside of that warehouse.

“The fact that it kind of comes with these social media rantings, manifestos … it’s sick to kind of watch because people are filming this stuff on their own now,” Billie said. “It’s sort of like we’re terrorizing ourselves.”

Green Day’s 2004 album “American Idiot” marked a departure for the band. The concept album dealt with topical political issues at the time of the album’s release, especially the presidency of George W. Bush and the ongoing war in Iraq. Howard asked if the band ever questioned whether or not “American Idiot” would alienate any of their fans.

“There was some fear there, but we were like, ‘Let’s just go all in with it,” Billie said. “I think when we were really getting into we were like, ‘Who cares what anyone thinks – give us an A or give us an F.”

“American Idiot” went on to become the band’s most successful album, selling some 15 million copies.

One of Green Day’s five Grammys is for “Boulevard of Broken Dreams” which won for Record of the Year in 2006. After Green Day performed it live on the Stern Show, Howard asked Billie Joe about writing the song’s haunting lyrics.

“Sometimes I’ll write something and I’ll think it sounds happy but it sounds really dark,” Billie answered. “When we play live, it’s really a celebration, but it’s a celebration of all the weird people.”

It’s been nearly 30 years since Green Day played their first show together in 1987. And they have no intention of stopping any time soon. Howard asked Billie if he could see the band still playing when they’re in their 70s like the Rolling Stones.

“Yeah, I think so. You might as well do what you love until you can’t do it anymore,” Billie said, adding that it’s hard for him now to take breaks from recording or touring since it’s the thing he loves to do the most in life. Mike explained that the reason they keep going has nothing to do with money.

“We’ve been rich a long time and since we’ve become wealthy, I’ve never pretended to not be,” he said. “At the core of who we are, the things that matter don’t apply to money.”

For their last song of the morning, Green Day performed the title track from their new album “Revolution Radio” (above), backed up by guitarists Jason White and Jason Freese, and keyboardist Jeff Matika.