“Negan is under Rick’s skin so now Jeff, in turn, is underneath Andy’s skin,” the actor tells Howard 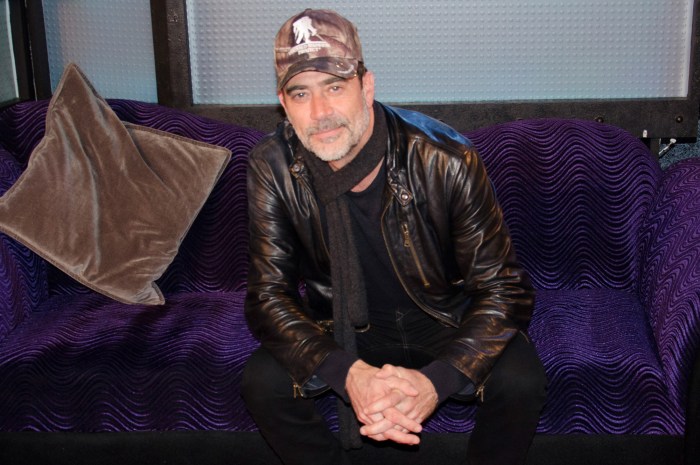 Jeffrey Dean Morgan dropped by the Stern Show on Tuesday to talk to Howard and Robin about playing one the evilest men on television, Negan from “The Walking Dead.” Jeffrey, who made his first appearance on the hit AMC series in Season 6, admitted to tormenting his method-acting co-star Andrew Lincoln both on and off camera.

“He’s very much in character all the time which I particularly have fun with because, you know, Negan is under Rick’s skin so now Jeff, in turn, is underneath Andy’s skin, hugely,” Jeffrey told Howard.

Andrew, who is British, sticks with his character’s American accent even after cut has been called, according to Jeffrey. Since Negan and Rick are at odds on the TV series, Jeffrey revealed he playfully feuds with Andrew in real life, trying to get him to break character. “I really pick on him. I think the bigger reaction I can get off camera from him, if I can get him just screaming and swearing then I know I’m doing my job,” he said.

While most view Negan as the main villain on the current season of “The Walking Dead,” Jeffrey defended his character and some of his most violent offenses.

“If you put yourself in this apocalyptic Zombie-fied world, I think anybody that’s survived this long has probably done some bad things,” he explained, adding that Rick and his crew aren’t exactly sinless. “They killed 30 of my men while they slept. So far, I’ve tapped a couple of guys in the head with a baseball bat and all of a sudden it’s the end of the world!”

Howard asked Jeffrey about a viral video that leaked earlier this year that featured his character taking his barbed wire-wrapped baseball bat “Lucille” to the head of series regular Maggie (played by Lauren Cohan). When Season 7 premiered, however, it was two other fan favorites Negan bludgeoned to death.

“I did kill shots on the entire cast,” Jeffrey explained. “I think the plan was, they would leak some stuff beforehand just to throw people off because there are people whose sole purpose is to ruin the show, to spoil what’s going to happen on the show.” 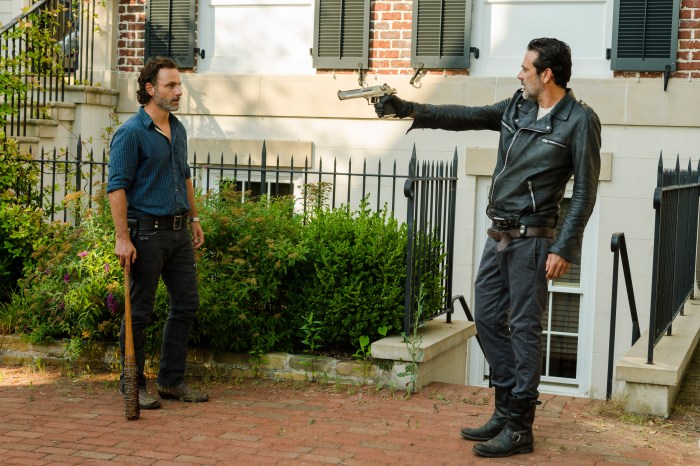 Jeffrey offered no spoilers himself on Tuesday, but he did confirm that he’ll be back for the eighth season and will have a lot of screen time on “The Walking Dead’s” next two episodes.

“The next two, I’m really big in,” Jeffrey said. “I’m fucking heavy in those.”

Jeffrey’s “Walking Dead” role has earned him millions of new fans and he told Howard some of them have a hard time separating reality from fiction.

“It’s mostly women who I get really weird fan mail from,” Jeffrey said, explaining that he’s received messages that include sexual fantasies some have about Negan. “Like, they just want to be, I don’t know, gagged and tied up and beat on a little bit.” As for male fans, Jeffrey says he’s caught guys sizing him up, seeing if they would be able to take him in a fight.

Perhaps the biggest Negan fan, though, is Jeffrey’s six-year-old son. He’s too young to actually watch his father’s show, but he proudly wears his “Walking Dead” backpack to first grade and often dresses up like his dad’s TV character.

“He’s got his own baseball bat,” Jeffrey said. “He’s got a little Lucille.” Jeffrey was given a bit of a scare one day after his son told him he was “playing Negan” in the family chicken coop.

“He comes bounding out of the chicken coop and he’s dressed full-Negan with the baseball bat,” Jeffrey told Howard. His son admitted to playing “Eeny, meeny, miny, moe” with some of the hens. While that game usually ends with Negan killing someone on “Walking Dead,” Jeffrey was relieved to find his son hadn’t hurt any of the chickens with his baseball bat.

Chickens aren’t the only animals Jeffrey and his wife Hilarie keep on their farm in Upstate New York — they also have cows, ducks, dogs, and alpacas. Life out in the country isn’t totally removed from Hollywood, however. Jeffrey owns a candy store with actor Paul Rudd, who lives nearby. Jeffrey and Paul purchased the shop after its original owner passed away suddenly. Howard asked if the store is turning a profit for Jeffrey.

“I don’t really give a shit but we are,” he said. “We’ve now opened online and, so, we’re getting a lot of business, especially between Ant-Man and Negan.”

Rudd isn’t the only famous friend Jeffrey has upstate. His former “Good Wife” co-star Julianna Margulies and his “Walking Dead” co-star Norman Reedus also have homes in the area and Jeffrey told Howard the group often gets together.

His success is undeniable now, but Jeffrey talked about being let go by his manager after she considered him to be too old to represent.

“My manager called me one day, who I’d been with for, like, seven years, and was like, ‘You know what, you’re too old.’ I was like 37 years old,” Jeffrey told Howard. That manager would soon regret severing ties with Jeffrey, though.

“Literally the next day I got ‘Supernatural,’ ‘Grey’s Anatomy,’ and ‘Weeds.’ They all happened at the same time,” Jeffrey explained. “I had immediately signed with another manager who I’m still with to this day, a guy named Rob Gomez who’s awesome.” Which means his previous manager didn’t see a dime from those three deals. Howard wondered if Jeffrey has ever run in to the old manager.

“I’d run into her at a movie premiere,” Jeffrey said. “She got really mad at me for basically telling the same story that I’m telling right now in a little magazine that no one ever read, so I’m sure she’ll be thrilled to hear about this interview.”

Jeffrey told Howard he points to his role on “Grey’s Anatomy” as the one that changed his career. He played Denny Duquette, a patient who would become the fiancé of Katherine Heigl’s character Izzie. Jeffrey had nothing but nice things to say about working with his former co-star.

“I know that all this shit’s been said but I gotta tell you … she is a great girl. Easy to work with, she was a total pro,” Jeffrey said of Katherine.

Jeffrey’s character was eventually killed off of the ABC series after a 20-plus episode run, but he revealed to Howard that — due to the show’s popularity — he hasn’t had to audition for any role since, including his current role on “The Walking Dead.” Robin asked if Negan will eventually be killed off or if he’ll somehow survive until the series finale.

“Hey, how cool would it be if it became the Negan show? Like, he kills all of them,” Howard joked. “I’d watch that show.”

Watch Jeffrey Dean Morgan as Negan on “The Walking Dead” Sundays at 9 p.m. ET on AMC