Pam Anderson, Johnny Knoxville, and Robin Quivers have all been strapped in and questioned over the past two decades 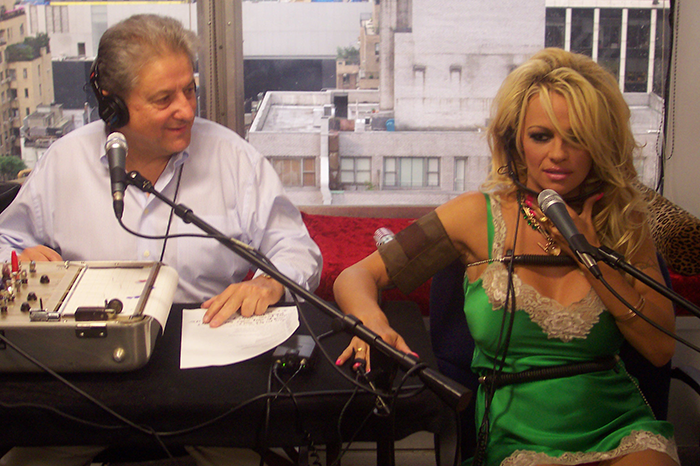 Pamela Anderson being tested by Ed Torian in 2004 Photo: The Howard Stern Show

Master lie detector Ed Torian returns to the Stern Show on Monday to find out whether Sal Governale and Richard Christy are telling the truth about not being gay. There’s a mountain of evidence suggesting these two have at least some same-sex attraction but one way to find out for sure is a test from Ed.

For over 20 years, Mr. Torian has provided his services to Howard, asking countless questions to Stern Show staffers and celebrities alike while determining who is being truthful and who is being deceptive. Check out some of Ed’s most memorable visits (below) and tune in Monday to find out once and for all if Sal and Richard are as straight as they say they are.

In 1995, Ed Torian was brought in to conduct his first lie detector test on none other than Stern Show co-host Robin Quivers. Howard believed Robin had romantic feelings for him at one point in their career together, but she denied his claim.

“You’re being dishonest, I know it,” Howard told her. “Would you be willing to take a lie detector test?”

While Robin was shown to be telling the truth about not being sexually attracted to Howard, she did admit to having sexual thoughts about Jackie “the Jokeman” Martling and K-Rock General Manager Tom Chiusano. Ed also revealed that Robin was being deceptive when she answered “no” to Question 16: Have you ever had sexual thoughts about Malika Kinison?

“I think his machine is broken,” Robin said. 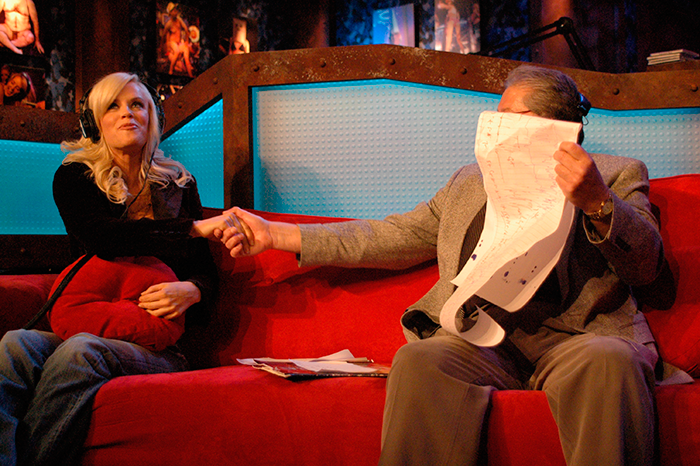 In one of Howard’s first shows on satellite radio, guest Jenna Jameson shared a story about a wild night she and Jenny McCarthy had together in Las Vegas. Jenna admitted on air that Jenny had gone down on her while the two were hooking up inside a nightclub bathroom, but when Jenny dropped by the Stern Show a few weeks later, she said, “that did not happen … but there is a lot more to the story.”

Jenny told her version of the story, confirming she did indeed make out with Jenna that night and was definitely interested in hooking up with her.

“I couldn’t stop thinking about her,” Jenny told Howard. “After I made out with her in the bathroom, I bought about 30 of her videos.” But the two didn’t do anything more than kiss, according to Jenny. They would meet up again at a Halloween party but Jenny said it wasn’t her who hooked up with Jenna, it was one of her friends. Jenny, still very much attracted to Jenna, invited her to come upstairs and take a bath but Jenna said she was too tired.

“She kind of turned me down,” Jenny said. Howard wanted to find out once and for all which woman was telling the truth so he moved Jenny into the other room to be questioned by Ed Torian. “I always tell the truth. I really do. I have nothing to hide, ever,” Jenny said.

As good as Jenna’s tale was, it appears it was all just a fantasy, as Jenny was proven to be telling the truth about the night in question. 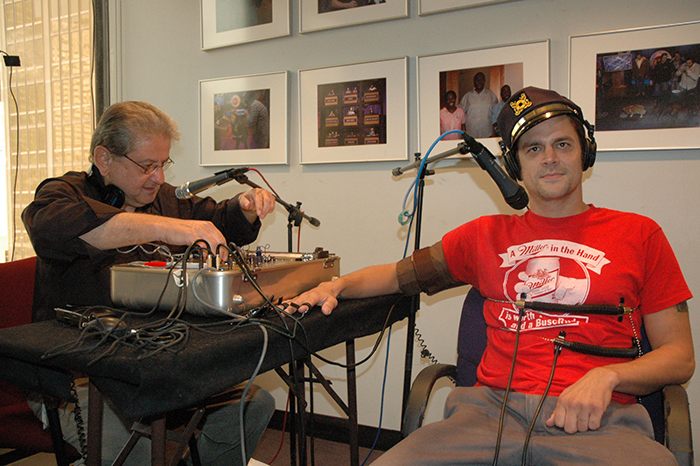 Everyone wanted to know if Johnny Knoxville had slept with his “Dukes of Hazzard” costar Jessica Simpson – he said no but Howard wanted Ed Torian to find out if he was telling the truth.

“I’ve got nothing to hide,” Johnny said before the results of his lie detector test were read on air.

“He’s telling the truth. He didn’t have sex with her,” Ed said. Johnny also answered truthfully about being happy in his marriage.

There was only one question Howard wanted to ask his frequent guest Pamela Anderson: Does she find him cute? Before being hooked up to Ed Torian’s lie detector, Pam told Howard she definitely did think he was sexy. Turns out, she was telling the truth.

“She’s been turned on by you,” Ed said while reading Pam’s results.

“I gave you a kiss one time and I thought, ‘Gosh his lips are really soft,'” Pam told Howard. “It’s the little things.” 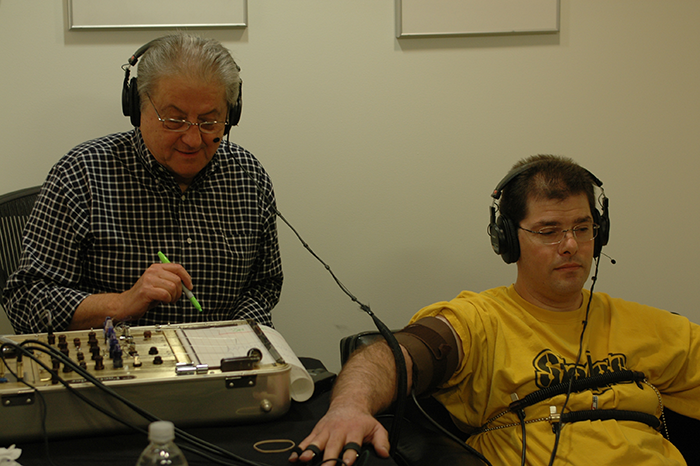 “Turns out, he lied to us all the time,” Robin said.

Jon backed up his stories by explaining he never said he hadn’t masturbated his entire life.

Howard had long questioned Stern Show staffer KC Armstrong’s sexuality after he refused to get into a hot tub with a woman out of fear that she’d steal his wallet. Ed Torian came in to test if KC had any interest in the opposite sex and the results were somewhat surprising.

“He’s bio,” Ed told Howard. “He likes girls and guys.” Howard explained to Ed that the term for that is “bi” not “bio,” while KC argued nothing about this test could be taken as fact.

“I’m not knocking your credentials,” KC told Ed. “I’m sure you’re the best at what you do, but I don’t believe in this type of thing.”

“Of course you don’t. It didn’t work out for you!” Robin joked. 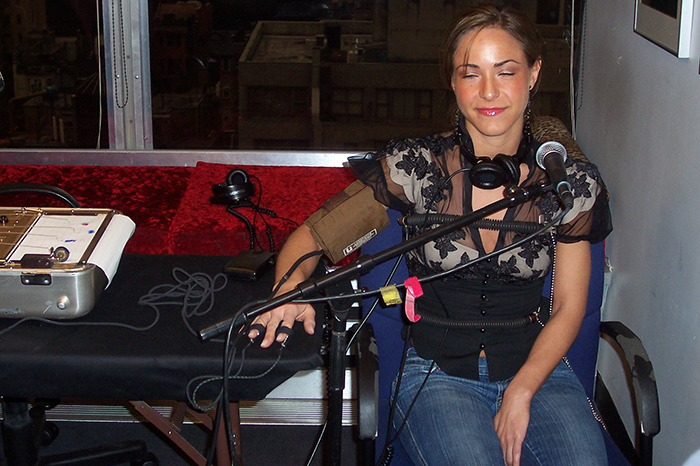 In 2004, Ed Torian gave what would become perhaps his most famous Stern Show lie detector test to former “Apprentice” contestant Ereka. While shooting the Donald Trump-hosted reality series, a rumor got out that Ereka called fellow contestant Omarosa the N-word. She denied ever doing that while strapped in to Ed’s machine.

“She didn’t call her that. She was truthful,” Ed said while reading Ereka’s results. Not only was Ereka proven to not be a racist, her test suggested she found both Howard Stern and Robin Quivers sexually attractive.

“I’m all over the place,” Ereka said with a smile. 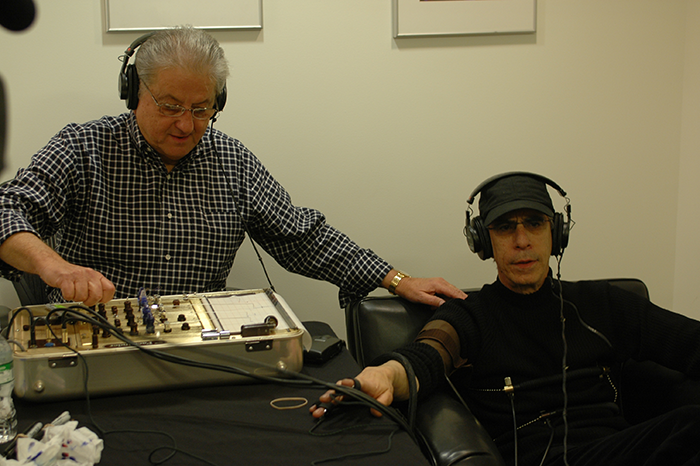 Howard had a bone to pick with his friend and frequent Stern Show guest Richard Belzer. The comedian had agreed to host a charity event for the North Shore Animal League but backed out the night of, claiming he was too sick to attend. Howard doubted Belzer’s excuse and asked Ed Torian to get to the bottom of it.

“Were you sick the night of the North Shore Animal League charity event?” Ed asked Belzer, who stated he was. Torian later told Howard he “failed” that question.

“This is all bullshit,” Belzer said with a laugh. “Get this shit off me.”

During the break, Belz pulled Howard aside and explained to him privately why he missed the event that night. Whatever was said during their conversation was enough to convince Howard his friend was telling the truth, despite the results from the lie detector test.

“Belzer was really not doing well. He did not feel well,” Howard said once back on the air. “I feel like a giant asshole.”

Howard’s personal stylist Ralph Cirella has left many wondering whether or not he was gay or straight. In 1996, Ed Torian returned to the Stern Show studio to administer his lie detector test on Ralph and find out whether or not he preferred men over women. But when Ralph arrived that day, he stated he was backing out of the polygraph test. It took $2,700 from Howard, Robin, and Tom Chiusano to convince Ralph to sit down and strap in to Ed’s machine. Mary McCormack, who was also in the studio that day, held the money while Ralph took his test.

“You should bet some more money,” Ralph told Howard, confident he would pass as straight. He was wrong. Ralph flunked nearly every one of the questions Ed asked him about his sexuality.

“The needle went up and he really showed signs of deception,” Ed told Howard, pointing out the uptick on Ralph’s test results after being asked if he was gay.

“The worst one of all was asking about Brad Pitt,” Ed continued, saying even though Ralph said he wasn’t sexually attracted to the A-list movie actor, the test showed he was. Howard was stunned to hear the results.

“You don’t even know it,” he told Ralph. “Everyone’s telling me you don’t know it. Me and you are the only two that don’t know it!”