“I made a lot of money playing the dumb guy on ‘Friends,’” LeBlanc told Nealon, who plays the dimwitted brother on “Man With a Plan” 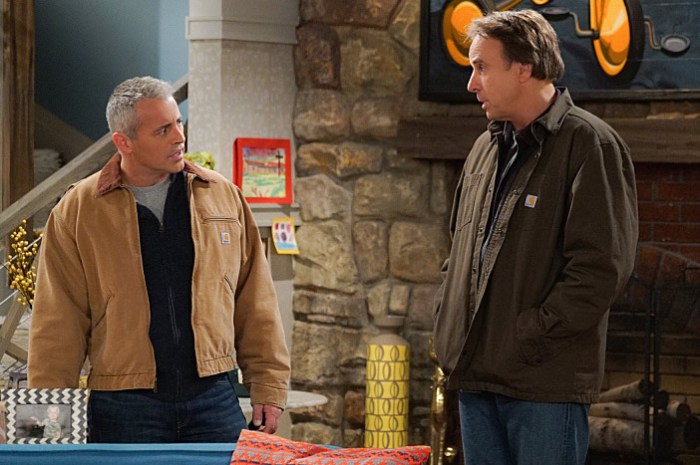 Matt LeBlanc and Kevin Nealon on “Man With a Plan” Photo: CBS

Kevin Nealon has played a lot of characters throughout his career and his latest is the dense brother Don on new CBS sitcom “Man With a Plan.” His co-star Matt LeBlanc knows a thing or two about playing stupid on a TV show after starring as Joey on “Friends” for a decade.

Kevin told Howard on Wednesday’s Stern Show that Matt actually gave him advice about acting like an idiot on primetime television. “He tells me a lot: ‘You’re playing the dumb guy in this show, but I made a lot of money playing the dumb guy on ‘Friends,'” Kevin recalled.

TV legend Jim Burrows was in the director’s chair for several episodes of “Friends” and is now at the helm of nearly every episode of “Man With a Plan.” However, Kevin met Jim decades ago while trying out for the part of Sam Malone on “Cheers.” Kevin was brought in for five separate auditions and admitted to Howard he thought he’d landed the role after his last audition in front of Burrows and co-creators Glen and Les Charles.

“In the last audition the Charles brothers … they look at each other and say, ‘We’re not getting any closer than this.’ And I walked out of there thinking, man, this is it,” Kevin told Howard, explaining that he was especially perfect for the part since in early scripts Sam was written as a young former football player — Kevin was in his mid-20s and had actually played football growing up.

Producers decided to go in a different direction with the character, though. Sam was rewritten as an older former baseball player and the part went to Ted Danson.

“I wasn’t bitter. I was very young at the time,” Kevin said. “Sometimes I sit back and I think, how would my life have been different? I wouldn’t have wanted that because I’m happy with where I am right now … if I had gotten ‘Cheers’ I never would have been on ‘Saturday Night Live.'”

Kevin shared a story about his audition for “SNL,” too. It was a gig he never thought he’d get considering he only did stand-up at the time and had no sketch characters to show off.

“I knew I’d never get it. It was just a free trip to New York,” Kevin said. He was wrong, though, and soon was sitting in executive producer Lorne Michaels’ office being offered a part on the NBC late-night series.

“I said ‘Let me think about it over the weekend.'” Kevin told Howard, explaining that he didn’t really need time to think the offer over but was instructed by Brad Grey — manager to both him and Lorne — to say he needed more time. His bold move could have backfired, but Kevin suspects Brad tipped Lorne off on the advice he gave his young client. Kevin went on to star on “Saturday Night Live” for nine seasons.

Watch “Man With a Plan” Mondays at 8:30 p.m. ET on CBS. For Kevin Nealon’s ticket and tour info, click here.