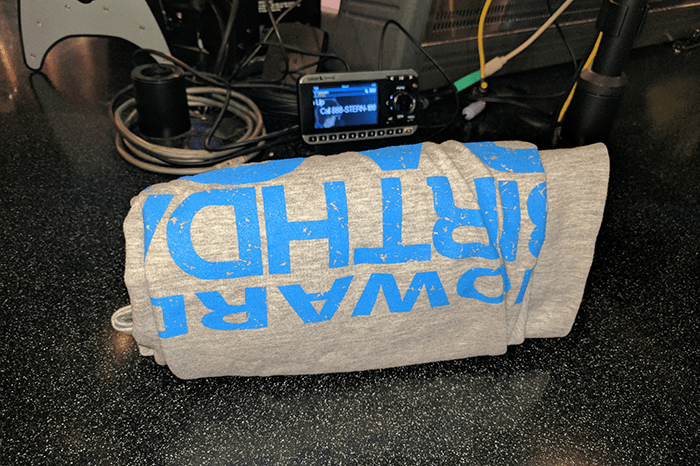 Howard spent the weekend cleaning out his closet and following the teachings detailed in Marie Kondo’s “The Life-Changing Magic of Tidying Up.” Moreover, on Monday morning Robin observed Howard teaching some of the staff members a new folding method for clothes he had practiced that left a shirt standing up on its own, amazing JD Harmeyer.

In more exciting news, Howard announced that Bobo will be arriving at the studio on Tuesday with his proctor to take a test that will determine how severely he’ll be punished for lifting Greg Gutfeld’s joke back in November.

Sharpen your pencils – the Bobo Essay Test is real and happening this week! A failure could mean the end of the Bobo name as we know it… pic.twitter.com/2tK2DAHqjz

There was a surprise, though. While Bobo has been reportedly preparing to write a 750-word essay about plagiarism, Howard revealed that — after hearing the frequent caller was attempting to memorize his essay as opposed to simply having the knowledge to write one — he has decided to change the topic at the last minute. As a result, Bobo won’t know what he has to write about until he arrives at the studio.

If Bobo receives a failing grade, he will henceforth lose the “Bobo” namesake and simply become “Steve from Florida.” He will also be banned for the entirety of the winter. If he receives a “D,” Bobo will only be stripped of his name. A grade of a “C” will earn Bobo a two-week ban, and a “B” will allow Bobo to leave punishment-free. If, however, Bobo somehow manages to get an “A,” he will be crowned the Stern Show’s “Number One Extreme Superfan” as a reward. The proctor will be scoring him on a fifth grade level.

Later in the morning, Bobo took to the phones, but since he is still banned was only allowed to leave voicemails. “I’m outraged,” he told Jason Kaplan. “I feel like I’ve been stepped on and kicked to the curb … You’re sticking a fork in me before I even start.”

Bobo will take the test on Tuesday and his grade will be revealed live on Wednesday.