“It’s like he broke into a jewelry store and he stole the bowl of mints,” the Fox News host says Wedesday 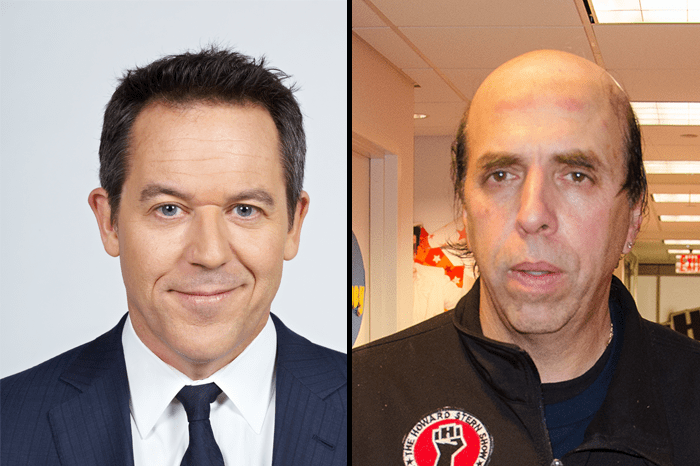 Fox News television personality Greg Gutfeld threw the book at recidivist Stern Show call blunderer Bobo on Wednesday morning after learning that the toupee-wearing Floridian had plagiarized his analogy last week while making an on-air comment about the result of the election.

Gutfeld—co-host of Fox News’ “The Five” and host of “The Greg Gutfeld Show”—first addressed Bobo’s poor choice in material. “He didn’t just steal a joke, he stole like a weak joke,” Greg argued, explaining that he would’ve liked to have a better introduction to the Stern Show audience for his first call. “It’s like he broke into a jewelry store and he stole the bowl of mints,” he continued.

As for the punishment, Gutfeld wondered if there may be a way to simultaneously hit him where it hurts and also make him a better person. After some deliberation, Howard and Greg decided it would be fair to make Bobo don a shirt one day each week for a month that read: “I wear a bad toupee and I steal Greg Gutfeld’s jokes.”

Bobo complained that he would be “run out of the state of Florida” and, when Howard requested an official apology for Greg, he still didn’t seem to take full responsibility: “I apologize Greg, for lifting that joke at 2 a.m. in the morning … I was half asleep!”

Ralph Cirella, for one, was not satisfied. Calling in as a last ditch effort to convince Greg to stiffen the punishment, he laid it on thick: “Bobo is a dull, lying, wig-wearing plagiarist … Just for the holidays, give everybody the gift of no Bobo.”

Howard left the decision up to the injured party and the Fox News host was convinced, much to Bobo’s chagrin.

Instead of a straight ban, though, Gutfeld admirably still wanted to provide an educational experience for Bobo that would make him a better person. As such, the final punishment was decided to be multi-tiered — Bobo will be banned from the show until the third week of December, but he also has to write an original 750-word term paper on plagiarism, which will be graded by a professional school teacher.