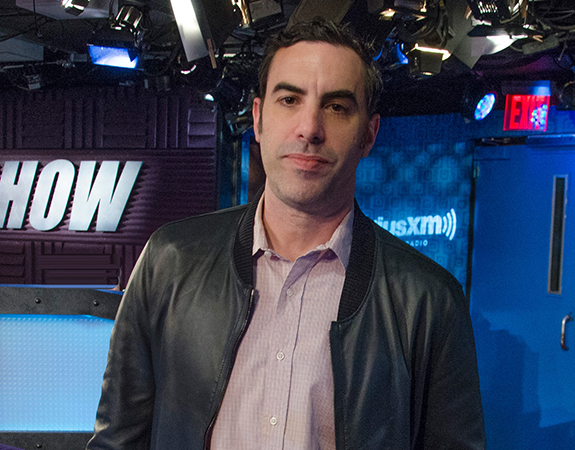 Sacha Baron Cohen returned to the Stern Show on Tuesday to talk to Howard about his newest comedy “The Brothers Grimsby.” The conversation covered an array of topics ranging from his surprise Ali G appearance at the Oscars to a failed attempt at a Freddie Mercury biopic and why he refused to stand down on a Donald Trump joke. Check out all the details below.

Once Sacha entered the studio, Howard introduced the British comedian’s newest action comedy “The Brothers Grimsby,” which is about two English brothers separated at a very young age. One brother grows up to become the world’s best secret agent (Mark Strong) while the other becomes a soccer hooligan (Sacha Baron Cohen).

Howard wanted to know more about what it meant to be a hooligan, so Sacha explained to get into his role he had to visit a few soccer clubs, which is another name for a pub and not the safest place to be hanging around.

Sacha hired a bodyguard to go with him to visit one of the most dangerous groups, the Special Crew. The guard told him, “Listen, just so you know I’m going to be blending in … If anyone knows you’ve got a bodyguard, you’re in trouble,” the guard told Sacha.

All of the sudden the bodyguard had one beer after another in his hand, Sacha told Howard. Within a half hour of entering the pub, Sacha’s trusty protection was passed out on the floor. The guard was a local guy and apparently got a little too into character while going “undercover.”

Curious about the lifestyle, Sacha asked one Special Crew member for a funny story and this is what he was told: “There’s one time I was in Manchester and we kidnapped this man. We brought him back to his house and we put barbed wire on places on his body that we shouldn’t have and then we blew up his garage,” the hooligan told Sacha.

Sacha replied, “Uh, have you got any even funnier stories?”

Howard was amazed at the length at which Sacha will go to get into his characters but that was only the tip of the iceberg in this rowdy English bar.

Getting Past the MPAA

Howard wanted to know what drove Sacha to create such wild and over-the-top movies like “Borat” and “Bruno.”

Howard pointed out in Sacha’s new flick there are about five or six moments that are really over the top. Howard asked Sacha if he dreads showing the movie to Sony executives once it’s finished to which Sacha replied, “Yes, but the studio actually loved the movie when they screened it.”

The real test for Sacha is getting the movie by the MPAA (the Motion Picture Association of America) since they’re the ones who designate the official movie rating.

Sacha recounted how he convinced the MPAA to give Bruno an R rating when by his own admission it should’ve been NC-17 due to a 45-second continuous shot of a penis.

“I know that I have a game with the MPAA,” he said, revealing that there is a method to his perceived madness.

In his latest flick there’s an insane bit where the two brothers need to “hide inside of an elephant’s vagina” and Sacha knew heading into his meeting with the MPAA that he wanted the scene to be about three minutes long. To get his wish he delivered a cut with a nine-minute version of this scene so that when he cut out six minutes it would seem like the MPAA got a small victory.

Using the Top Special Effects Team in the Industry

Howard was impressed how realistic the film elephant’s penis looked in the movie.

Cohen had the same special effects masters from movies like “Star Wars” to replicate the pachyderm’s phallic member. There were months of preparations that went into an “animatronic cock,” he told Howard.

A Run in With Wladimir Klitschko 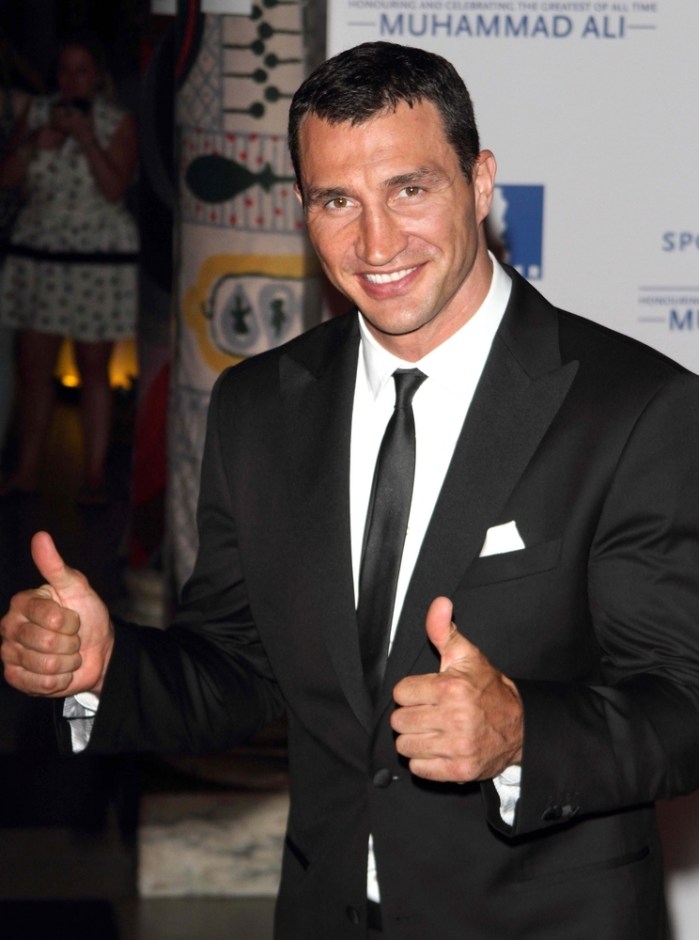 Howard wanted to know if Sacha had ever offended someone so bad, he feared physical harm. Sacha told Howard a story of how he ran into Olympic gold medalist and former boxing heavyweight champion Wladimir Klitschko at a restaurant a few years ago. Normally, that wouldn’t be a big deal but Mr. Klitschko is from Kazakhstan, the country Sacha’s Borat character claims as home.

A waiter approached Sacha at the restaurant and told him that Klitschko would love to meet him. Sacha walked over to his table and extended his hand, which Klitschko firmly gripped with no intention of letting go.

Soon Sacha’s wife and fellow actor Isla Fisher came over pretending to be a massive fan and asked for an autograph so Wladimir would release her husband’s hand, but that proved to not work as the former heavyweight pulled Sacha closer and quietly told him: “You humiliated my country. I’m from Kazakhstan. Why did you do that?”

“I’m actually looking for stuff on the table to grab hold of and like, get a fork and stab him,” Sacha half-joked to Howard.

The actor pleaded with him that it was only a joke and after a painful three minutes, Wladimir started to laugh and told Sacha he was joking and didn’t mind the film at all. In fact, he said he thought it was funny.

At last month’s Academy Awards, Sacha once again pulled one over on the powers that be during Hollywood’s most prestigious award show. They tried to forbid him from doing anything off-script, which turned out to push him even further into the bit.

At this year’s event, the lack of diversity amongst nominees was a hot button topic in the weeks leading up to the show. Sacha figured this would be a great impetus for Ali G to make an appearance.

Sacha told Howard he knew what he wanted his opening line to be: “I know what yous all are thinking, the academy has brought on another token black presenter.”

But before going through with it, Cohen found an English friend to run it past. The friend told him it was a bad idea, so he found someone more fitting to give him the green light to do the joke: Dave Chappelle.

Sacha saw Chappelle backstage and he quickly pitched him the line he wanted to say when he walked out. Dave told him that it was “great” and gave him the proverbial thumbs up to do it. Sacha admits that had Dave not given him the go ahead he probably wouldn’t have said the controversial line.

It was ultimately Cohen’s wife Isla Fisher who smuggled the Ali G costume in. And to truly prepare, he and his wife had to disappear into a bathroom for 40 minutes so Sacha could apply his character’s facial hair. As producers frantically searched for the actor, Sacha’s publicist told them he had diarrhea and wasn’t feeling well.

When he finally came out of the bathroom, Sacha said he had to cover his beard with his hand so no one would be wise to his plan before walking out on stage.

He informed his co-presenter, Olivia Wilde, seconds before walking out and she was totally into it, helping him put the final touches on his appearance.

Sacha explained that once he walked on stage though, things felt off: “I was worried because I went out there I didn’t hear any … reaction,” he admitted. “And then I realized actually eventually the camera was not on me” yet.

Once the camera did land on Cohen, he heard a nice gasp from the audience.

“I’m always trying to get fired,” he joked.

Howard also asked about the Freddie Mercury biopic Cohen had reportedly been working on for six years.

Sacha said in the end, it just didn’t pan out as he craved a grittier, edgier film than what the remaining Queen band members desired.

“There are amazing stories about Freddie Mercury … the guy was wild,” he explained.

The band, though, seemed to be more interested in protecting their legacy than promoting the true embodiment of arguably one of the greatest voices rock has ever known, in Cohen’s opinion.

Sacha admitted he should’ve dropped out of the project after the first meeting when one of the band members – Sacha wouldn’t say which one – told him that Freddie Mercury’s character would die halfway through the movie.

Sacha assumed they wanted to make a “Pulp Fiction” type movie where everything was out of order. But the truth was the band wanted a linear movie that showed how well they all did after Freddie’s untimely death.

At the end of the day, Sacha chalked it up to an “artistic difference.”

In Sacha’s newest movie “The Brothers Grimsby,” there’s a controversial scene that depicts G.O.P. presidential candidate Donald Trump contracting H.I.V. “We actually had an argument with the studio about it,” Sacha told Howard. “They said you have to put in a card at the end saying, ‘Donald Trump was not involved in the movie and is not H.I.V. positive.’ And I fought them on it.”

The studio was presumably afraid that the Donald would sue them, not to mention that he might be the next U.S. president. In the end, Sacha pointed out that he couldn’t prove that Donald Trump didn’t have H.I.V. so he wasn’t comfortable putting that card up.

Make sure to go out and see “The Brothers Grimsby” in theaters everywhere Friday, March 11.