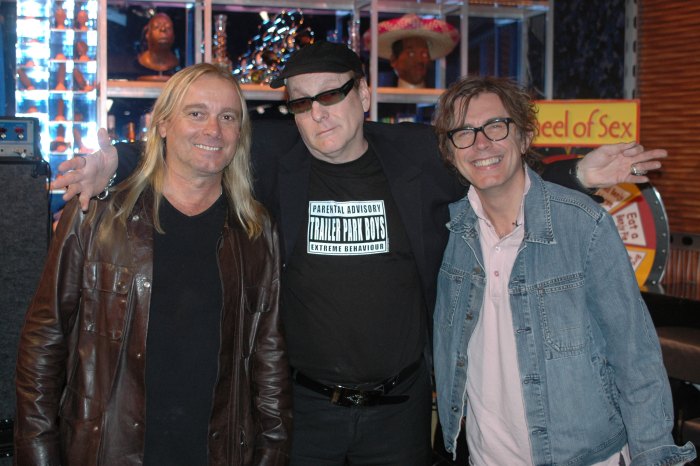 In 2016, rock and power pop legends Cheap Trick are finally receiving a long-overdue induction into the Rock and Roll Hall of Fame. However, to the Stern Show universe, the band has always been Hall worthy! One of Howard’s favorites, Cheap Trick has been ingrained in the fabric of the Stern Show for years, often featured during show bumpers, playing live in-studio, and even being featured on the “Private Parts” soundtrack. For years, Howard has been saying how Cheap Trick deserves to be in the Hall of Fame almost as much as he says “hey now.”

Before the band finally gets inducted on Friday April 8, Rick Nielsen, Robin Zander, and Tom Petersson are returning to rock out once again with Howard. We figured what better way to honor the mark Cheap Trick has made on music than by looking back at some of their best moments…previously on the Stern Show.

A Pre-Fame Scuffle With Slash 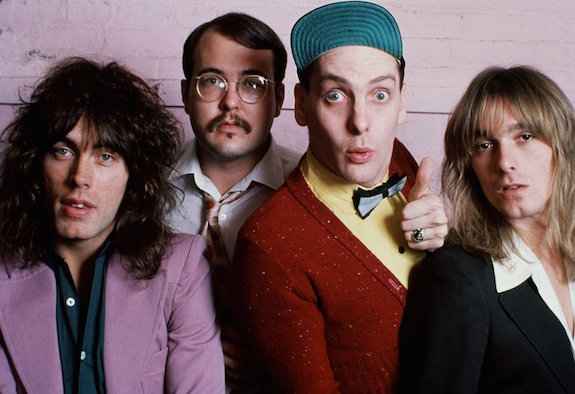 In 1996, Cheap Trick (minus Bun E., who was off at a drum clinic) came on the show to promote their new box set, “Sex, America, Cheap Trick.” Most significantly, Cheap Trick became the first band to play live in Howard’s new studio at K-Rock.

During their on-air conversation, Howard asked Rick Nielsen about getting into a fight with a pre-fame Guns ‘n Roses. “Well, they opened up some shows for us out in California…and I invited them over to our house,” began Rick. “They said ‘can we use your telephone?’ ‘Sure, you want to have a drink or two? Great, great, great.’ The whole band was there.”

“At the end, Slash was pretty drunk, and he took a swing at me…,” explained Rick. When Howard asked why, Rick half-jokingly hypothesized: “…maybe lack of talent, maybe because he’s an asshole? But since, we’ve kissed and made up.” Ultimately, Rick landed on the simplest answer: “[Slash] was drunk.”

Though Rick maintained that nothing was said to provoke Slash’s outburst, Howard of course wanted as many details as possible about this story and pressed Rick for more info. “It was at the end of the night, everyone else had left,” Rick said. “It was really a late night, two drunken fools…and they had to call their security guy up…and dragged [Slash] out to the bus and later we heard that he, uh…threw up and pissed all over his bunk.”

In conclusion, Rick said, “I haven’t invited them back.”

In 1996, “Private Parts” was about to hit cinemas, and Rick thanked Howard for letting the band be a part of it by including Cheap Trick’s hit song “I Want You to Want Me” on the movie’s soundtrack. Howard explained to the band that when he was putting together the music he wanted to include, he had Cheap Trick’s “Live at Budakon” album on a turntable. “Budakon” was an album that reminded Howard a lot of his days at Hartford, which are covered in the film, so including the song on the soundtrack made sense. Howard asked Rick what his inspiration was for “I Want You to Want Me.”

“I did well in school as far as getting low marks,” Rick explained, “so I did get lucky, but they were always the sleaziest of people. I lusted after the ones I thought would be good for me in my future. Actually, I went to my class reunion and a girl we thought was…the loosest, we looked in the book and there was her name. She was a doctor. I was like, ‘damn it!'”

The band then played an acoustic version of “I Want You To Want Me” for Howard, live in studio.

Opening for Stuttering John and Hating Their Biggest Hit 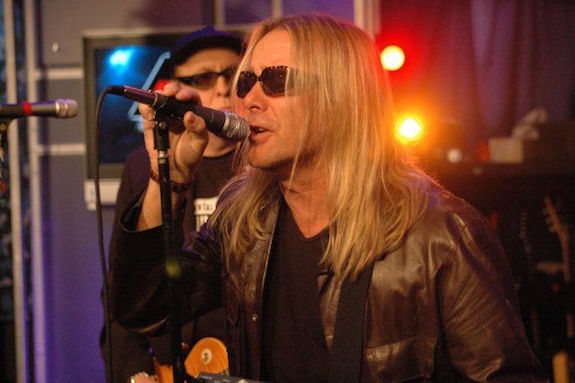 In 2006, Cheap Trick appeared on the show to promote their new album “Rockford,” the band’s 16th studio album. Howard marveled at the band’s longevity before bringing up what was likely their lowest point: opening for the Stern Show’s Stuttering John. “That was lame,” admitted Rick.

It’s safe to say that the band recovered.

Howard asked about one of Cheap Trick’s biggest hits, “The Flame,” which they didn’t write and reportedly do not even like. “It was big in numbers, it was a number one song. It didn’t sell as many records as ‘I Want You to Want Me,'” explained Bun E.

Gary Dell’Abate recalled a story about “The Flame,” in which a cassette of the song was first brought to the band by their manager. After listening to it, Rick stomped on the cassette, calling the song shit. Given the opportunity to clear the story up, Rick said, “It wasn’t quite that bad. It was a good song. We did record it, and it was number one, so it wasn’t too bad. But it was about the 12th [song] they brought us…saying ‘this is great, this is great, this is great.’ We had 10 ‘greats’ in a row, and we rejected all of them. So by the 11th ‘great,’ I was just fed up with them.”

Rick concluded, “So we fired that manager and the record company…and here we are!”