Artist opens up about pulling the "Me Too" video, her new album "Thank You," and trying to find the right man 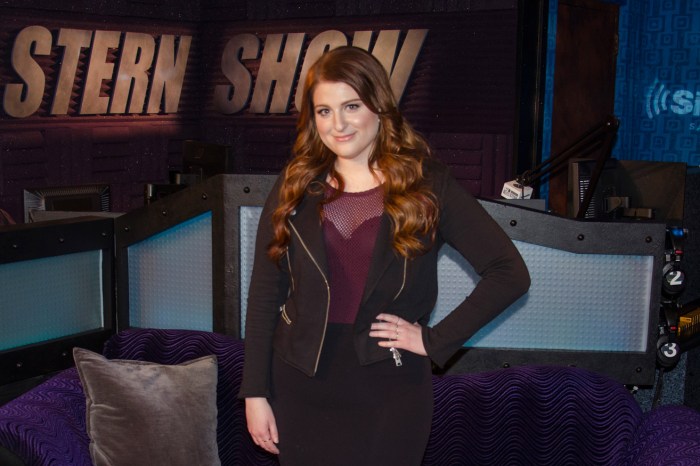 Singer, songwriter, and record producer Meghan Trainor dropped by the Stern Show studio for the first time Tuesday morning, ahead of her new album, “Thank You,” and opened up to Howard about writing songs professionally from a young age, cutting tunes for J.Lo, and what it’s like to be a young pop star looking for love.

Howard was fascinated by Meghan’s early start in the music business, as she entered songwriting competitions before signing a publishing deal with Nashville’s Big Yellow Dog when she was 18. “I left lunch! I left the cafeteria to sign my publishing deal,” Meghan told Howard.

Meghan experienced success early, selling two songs to country hitmakers Rascal Flatts (“DJ Tonight” and “I Like the Sound of That”). However, lacking the quintessential physical appearance of a “pop star,” Meghan thought she would remain a songwriter. “There was Facebook, man, there was, like, Instagram. There are pictures and how many ‘Likes’ you got,” Meghan told Howard. “It’s worse nowadays.”

It took what would become her signature tune to give Meghan the confidence to be a performer. “It was ‘All About That Bass,'” Meghan said. “It was being the face of that and seeing the crowds react when I would perform that.”

Meghan and her guitarist Drew Taubenfeld performed an acoustic version of “All About That Bass” in the Stern Show Studio, with Trainor rocking her bedazzled ukulele. Watch below:

Even after her big breakthrough, Meghan continued penning songs for other artists, notably giving “Ain’t Your Mama” to Jennifer Lopez.

“I was shooting my music video and she’d been asking me for a long time for songs, and I texted it to her,” Meghan told Howard. “She was like, ‘I love this; this is me.'”

Meghan had originally recorded “Ain’t Your Mama” for her own album, but it just didn’t fit. “My album was finished and I was like, ‘There’s no room … but this song is so good. What am I supposed to do with it?'” Meghan told Howard. “Then I remembered, J.Lo’s been begging for songs, so I texted it to her immediately.”

As a result of the song’s journey, Meghan’s background vocals are still on the final track.

“[J.Lo] said her son said it was a hit, because he played it five times in a row,” Meghan said.

Meghan made headlines this week after pulling the music video for her song “Me Too” from the internet because she noticed her body had been edited to look thinner.

Meghan shared her side of the story with Howard. “I asked [the music video producers], ‘Hey, can you hide my mustache and take off my mole-hair … those close-ups, you never know. So I just asked them to do that, but I never said, ‘Cut off my rib,” she said. “I saw screenshots that the fans were taking on Instagram and I was like, ‘Why are the fans messing with my waist?'”

That’s when she realized her fans weren’t responsible for her new look. The digital touch ups had been done for the video.

Naturally, Meghan took action. “I called every head of label – L.A. Reid, Sylvia Rhone – I called all of them and said, ‘Take this video down. I don’t care what it takes,'” she told Howard.

“I’m the poster child for no Photoshop!” Meghan said. “That is my thing!”

Meghan performed a second tune, “Hopeless Romantic,” before leaving, though first she clued Howard in to the song’s autobiographical aspects.

Howard was surprised that someone as famous as her couldn’t do whatever she wanted, but Meghan explained her celebrity status is part of the problem: “It’s crazy because I’m a girl, too, and I’ve asked asked J.Lo, I’ve asked other stars, like, ‘What’s up? What’s wrong? What’s going on?’ And they’re like, ‘[Guys] are just intimidated. You’re too young, you’re successful, they’re just frightened.'”

Meghan and her guitarist Drew performed “Hopeless Romantic” live after that, for only the second time ever.