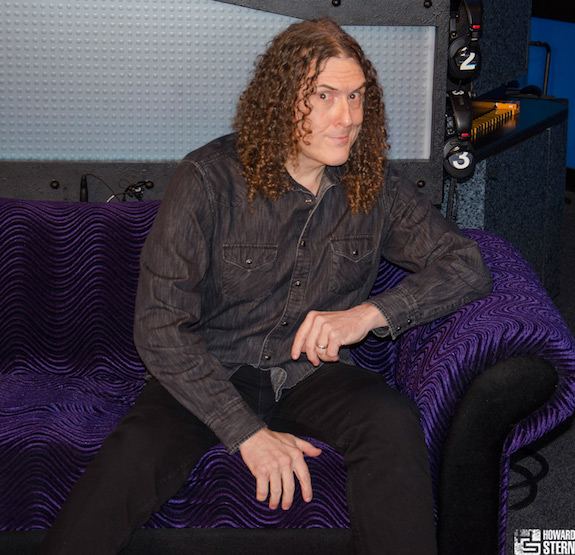 “Weird Al” Yankovic was in the Stern Show studio Tuesday morning to promote the “Return of the Mandatory” world tour, as well as his new co-hosting gig on IFC’s “Comedy Bang! Bang!” Returning for the first time in many years, there was a lot of ground to cover, and “Weird Al” didn’t disappoint.

Check out the highlights from Yankovic’s chat with Howard below.

How an Accordion Changed It All

Weird Al has carved out a unique corner of the music industry for himself, but the origins of his career include some familiar influences.

“Rock-wise, pretty standard stuff,” Al explained. “All the British invasion stuff: the Beatles and the Stones and the Kinks and the Who. I was a big Elton John fan in my teenage years. But Dr. Demento was what really got me going, because that was where I heard people like Stan Freberg and Spike Jones and Tom Lehrer, Alan Sherman, all those people.”

“Probably about my senior year in college was when he started to take notice,” Al told Howard. “I kept sending him stuff in the mail and he would play it.”

“[Dr. Demento] liked the fact that I played the accordion because he thought it was amusing that some teenage kid playing the accordion was thinking he was cool,” Yankovic said. “Then, the Knack was so huge that summer and any song about lunch meat was bound to be funny, and he just played it.”

Eventually, Al left college to work at Westwood One, the radio station where Dr. Demento broadcasted his show, and got to work alongside him once a week before later touring with him.

Howard was very curious about the legality of Al’s song parodies, wondering if he gets permission from every artist.

“I think ethically, it’s the right thing to do to ask the original songwriters, and also, we live in a very litigious society where even if there’s no legal grounds, people can sue each other,” Yankovic explained. “And nowadays, with all the rap songs I’m doing, you don’t want to be involved in a drive-by. That’s just never fun,” he joked.

Michael Jackson was one of the first major artists to give Al documented permission to parody one of his songs. “There’s a contract that has my signature next to Michael Jackson’s signature saying we are the co-writers of ‘Eat It,'” Al told Howard.

Another major artist who signed off on a Weird Al song was Kurt Cobain for “Smells Like Nirvana.”

“My manager was having a tough time getting through to his people, so I find out that he’s going to be doing ‘SNL,’ and thought, ‘I’ll just call him up,'” Al recalled. So he simply phoned Cobain at the “Saturday Night Live” studio.

Cobain thought the concept was funny and signed off on it.

The “Smells Like Nirvana” song and video ended up being successful for all parties involved. “I was talking to an executive from Nirvana’s record label, and they told me that after my parody came out, they sold another million units of ‘Nevermind'” Al said. “One of my favorite quotes is Kurt Cobain said he didn’t realize he’d made it until he saw the Weird Al video,” the proud parody artist added.

Naturally, not every artist has been receptive to Weird Al’s parody proposals though.

“[Prince] was just never into the parody thing,” Al told Howard of the late icon.

“I continually approached him, and he’d never give a reason.” Al explained, listing “1999,” “Let’s Go Crazy,” and “When Doves Cry” as some potential songs he would’ve liked to use.

Howard wondered about a strange incident with Prince at the American Music Awards in which Al was seated near the legendary artist but was reportedly instructed not to look him in the eyes.

“I got a telegram from his office,” Yankovic recalled. “It wasn’t a personal thing, I don’t think, because I was talking to the guy from Night Ranger and he said ‘yeah, we got the same telegram.'”

Permission to ‘Perform This Way’

Yankovic also told Howard about a bit of controversy when he approached Lady Gaga’s team about parodying her anthem “Born This Way.”

“We were dealing with her manager at the time, and her manager was not being very helpful,” Al said, explaining that he was first told they needed to see the lyrics (which he normally doesn’t do) and then they needed to hear a recording of the song.

Yankovic found himself altering his normal process to meet these criteria. “It’s not easy – I have to go to the studio and hire people, it’s expensive, but he said ‘if we don’t hear the song, we’re not going to approve it,'” Al told Howard. “So I went in – I was on tour actually. I was in Australia, flew in, recorded the song, sent it off.” The only problem was, after hearing the song, Lady Gaga’s manager denied permission, according to Al.

Again, he was in a rare position, and acted accordingly.

“Normally I wouldn’t do this … I put it online and I said: ‘Well everybody, this didn’t get approved. It will not be on my new album, but I put a lot of time and effort and money into this, so I thought you should at least hear it. Here’s my Lady Gaga parody,'” Yankovic said.

In the wake of releasing the song however, Al soon discovered that communication may have been the issue from the get-go.

After TMZ asked Lady Gaga why she wouldn’t allow the parody, it became clear that she hadn’t even been told about it. “She said, ‘I love Al, of course he can do the parody,'” Yankovic said.

The Return of the Mandatory World Tour

The “Return of the Mandatory” world tour is currently underway and, apparently, it features a significant amount of costume changes.

“I don’t know how many costume changes are in the show, but I think we have three more than Lady Gaga,” Al joked. “I get into the ‘Fat’ suit, I dress up like Kurt Cobain, the whole band dresses as Amish people,” he explained.

Catch Weird Al in a city near you — for tickets and tour dates head over to weirdal.com. Also, check out Al as the new co-host and bandleader on IFC’s “Comedy Bang! Bang!” beginning June 3.