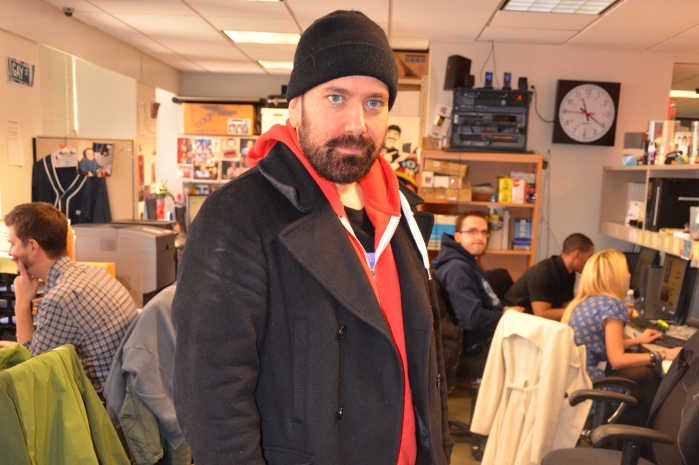 Ronnie “the Limo Driver (and head of security)” Mund explained the disconcerting scene in the building’s lobby Wednesday morning.

Benjy Bronk, who had arrived late as it was, also forgot his badge. After unsuccessfully searching for it in his bag, Benjy decided to quickly flash his credit card instead, and then tried to jump the turnstile before getting detained by the building security.

Ronnie said the building staff went nuts. “They don’t go for that kind of game.”

Back in 2010 Benjy went through such a severe late phase that it forced Howard to give him an ultimatum: Show up on time or get fired. Today, Howard wondered if he had reached that point again.

“Howard, how long has it been since I’ve been late?” Benjy pleaded, but Howard was already furious.

“When you are recidivous, it doesn’t mean you get less of a sentence,” Robin scolded Benjy.

Gary Dell’Abate added that he looked back and found his notes from when Benjy was an intern and they clearly document that not only was Benjy late for his first training session, but he continued to show up late as the internship continued.

Howard was fuming and called Benjy a “fucking nincompoop” as he mulled over possible punishments, finally settling on having Benjy work from outside the studio after today’s show.

When Benjy answered that he’d “rather not,” Howard exploded. “I think we have to do it because you fucked up my show again!” he admonished the shifty-aged writer.

Jason Kaplan added that if Benjy was out of the studio it would solve another problem – his head shows up in many of the studio photos of Howard and guests. Additionally, Benjy has a stockpile of packages cluttering up the area around his desk in the studio.

“Any mail that comes, throw in the garbage … I’m reaching the boiling point,” Howard said. He also reiterated that if Benjy was sitting where everyone else sits, he wouldn’t be able to hijack the show like this. “You took your lucky break and broke it in two,” Howard quoted from Paul McCartney’s “Too Many People.”

Fred Norris thought that Benjy really needed to have a conversation with someone at the company about his persistent tardiness.

Similarly, Brent Hatley, a former serviceman, explained that in the military when anyone is late, it is immediately considered an “unauthorized absence” and they can be thrown in jail. “It is so disrespectful to be late,” he added.

Howard allowed Benjy to suggest a punishment for himself, but the answer was an unsatisfying: “You can do anything to my body you want.”

The King of All Media wondered if he was being too soft on Benjy and turned to Brent who replied with a resounding “yes.”