Plus other behind-the-scenes “SNL” stories from Fred, Bill Hader, and Seth Meyers 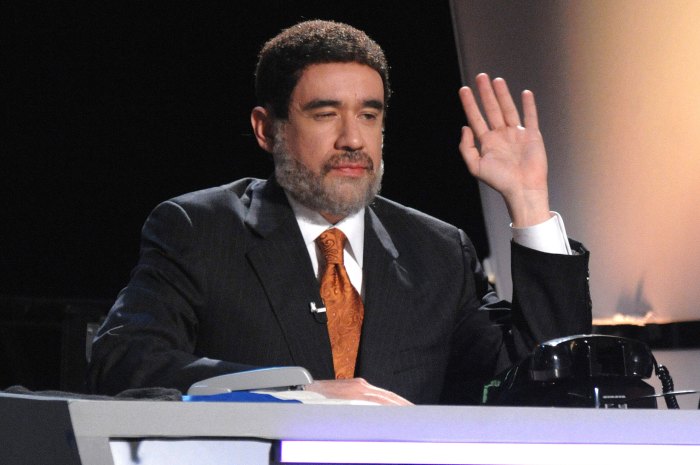 “Documentary Now!” stars Fred Armisen and Bill Hader and executive producer Seth Meyers returned to the Stern Show on Tuesday ahead of their IFC series’ Season 2 premiere. The three “Saturday Night Live” alumni waxed-poetic about their time together on the NBC late-night show and told Howard about the hardest they’ve ever seen its executive producer Lorne Michaels laugh.

“The first time [Fred] did [former New York Governor David] Paterson is by far the hardest I’ve ever seen Lorne Michaels laugh in my entire life,” Bill said. Fred’s impersonation of Paterson became an instant hit with fans, too – he portrayed the legally blind politician on several subsequent episodes. But not everyone laughed at his impression. Some thought it went too far.

“I didn’t feel like I was being mean about it,” Fred told Howard, explaining how they empowered Paterson by turning him in to a wise-cracking comedian who heckled everyone around him, including any and all who lived in New Jersey.

“He was high status and the great thing is it ended perfectly because, the last time we did it, [Paterson] came on,” said Seth, who was “SNL’s” head writer at the time of Paterson’s surprise walk-on appearance.

That episode was good, but the guys admitted they had lived through bad ones as well. While Lorne wouldn’t be laughing backstage after a less-than-stellar show, Seth told Howard his boss never lectured him afterward.

“When it’s really bad, that’s when Lorne will tell you that it wasn’t terrible,” Seth said, adding that he’d rather have a truly horrible show than a mediocre show “because those are the ones you remember.”

“We remember the terrible ones as a thing that we all went through that we can laugh about now,” Seth said. “They’re not really fun to go through at the time.”

Bill Hader said that if Lorne Michaels didn’t tell them the show was crap, the city of New York sure would. He told Howard about the time an “SNL” watcher came up to him and his kids at a bodega. “Hey, that thing you did last night, the fireman, that was dumb,” Hader said in a thick New York accent. He also remembered someone coming up to him and flat out saying, “You and your show fucking suck.”

Bill and Fred revealed to Howard how they decided to leave “SNL” at the same time. No, really – they left the stage at the exact same second after their last episode as cast members was over.

“We said, ‘When we step off this stage we’re officially ex-‘SNL’ cast members,'” Hader said, explaining that after counting to three, he and Fred both stepped off the Studio 8H stage in unison.

“We just wanted to enjoy it, too. We wanted to really appreciate every moment,” Armisen said.

Armisen, Hader, and Meyers of course have all reunited on “Documentary Now!” The second season of their IFC series premieres Wednesday, Sept. 14 at 10 p.m. ET.