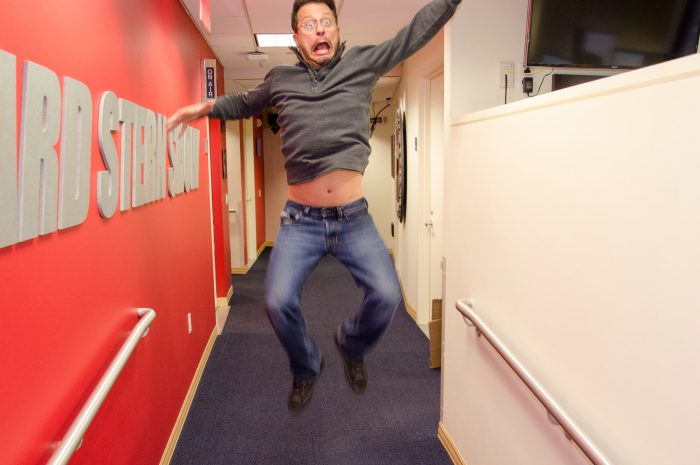 The latest story from Stern Show staffer Sal Governale is out of this world. Literally. On Wednesday morning, he revealed to Howard he’d recently left his body and flew to a different dimension.

“I went all the way up to the stars and I got scared and I came down quickly,” Sal said confidently. “I went back into my body and I said ‘Wow, I really enjoyed that. I’m going to do this again.’ So, I left my body again and I did like a somersault in my room over my bed.”

It was then that Sal began encountering several spiritual symbols.

“A big hand came out, a giant hand, and it was pointed downwards and it was floating, it was just floating … and I knew not to touch it,” Sal continued. “Next to the hand was a Buddha.”

Howard asked if after seeing this Buddha Sal feels compelled to convert to Buddhism.

“It’s a symbol, that’s all it is. A symbol of peace and love,” Sal said. “Jesus or Buddha, whatever. It’s all the same.”

“He’s just dreaming,” Fred Norris said after Howard asked for his take on Sal’s story. “I’ve had similar dreams to that but I know they’re dreams.”

However, Sal assured everyone he wasn’t dreaming since what he experienced happened in real time, including seeing “Jimmy Kimmel Live” playing on his bedroom television. Even with the ability to fly to the edge of the universe, Sal said he stopped to watch a bit of the late-night show.

“I’ve researched it on the internet. It’s sleep paralysis,” Sal said of his experience. According to what he read online, many people encounter sleep paralysis, a sensation of feeling trapped inside your sleeping body. “Your spirit wants to roam the earth but your physical body is still asleep and that’s the struggle,” he explained.

But when Sal’s out of body experience was over, he told Howard he felt enlightened.

“I went back in my body and then woke up,” Sal revealed. “I said, ‘Hey, I was just in a different dimension’ and, without any words being spoken, I knew that everything was going to be OK in my life.”

This isn’t the first time Sal has had a supernatural experience, either. In previous Stern Shows, he’s shared a story from when he was a teenager and woke up one night to find he and his bed were levitating off the ground, so high that his nose was pressed up against his bedroom ceiling.

“The good news is that, when I was 15, my bed didn’t float. It was me, because it was the same experience,” Sal said on Wednesday.