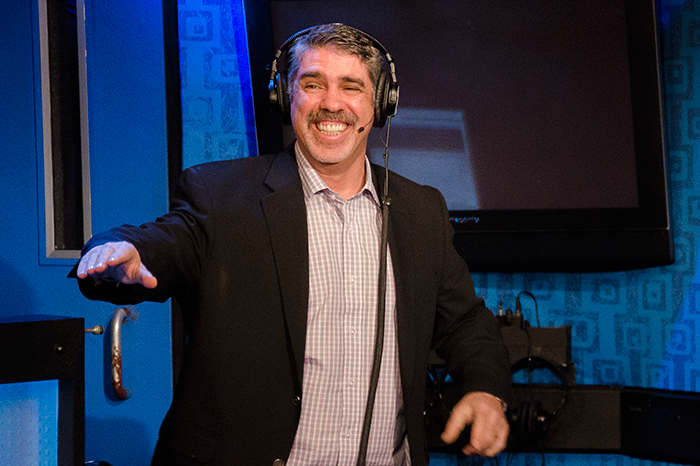 Gary Dell’Abate turned 56 on Tuesday and, in honor of the occasion, Howard unearthed the cringeworthy tape of his executive producer’s audition for an MTV VJ job 30 years later.

The gig would have supposedly allowed Gary to record each day for an hour in the afternoon while keeping his main job at the Stern Show, but from the sounds of the 1987 audition tape Gary didn’t stand a chance.

“This is the worst audition ever,” Howard said, pointing to a slew of flubbed words as evidence. “Gary’s kind of flirted with show business … but I think he’s more a behind-the-scenes guy,” he told listeners.

The other odd thing both Howard and Robin noticed immediately was that in the tape Gary pronounced his last name Dell’Abate (rhyming with “gate”) as opposed to the pronunciation he now uses. Gary explained he was still pronouncing his name like that in 1987 and it wasn’t until Howard did a musical gag in later years that he changed to the original Italian pronunciation, which his grandfather had actually used as well.

The MTV audition tape wasn’t Gary’s only attempt at show business, either—his recent Gotham Comedy Club stand-up gig came under fire from certain staffers and that was only the beginning of the birthday boy’s onslaught.

Jason Kaplan was ready with a list aptly titled “Gary Grievances,” which he wanted to present for the special day.

“The number one Gary grievance going on right now is that Gary’s in the middle of all these crazy, wild trips he gets to go do … and whenever Gary’s going someplace you have to hear about every single part of the plan,” he told Howard. According to Jason, the hardworking employees glued to their chairs in the office have had enough of the endless stories.

“I think this is mostly Jason’s grievance,” Gary fired back. “I do talk about a lot of stuff,” he admitted, though.

Next up on the list of gripers was Scott “the Engineer” Salem, but as the only member of the staff who didn’t make it into work with the snow storm he forfeited his right to complain. In his absence, Shuli Egar quickly hopped in to reveal that, while he isn’t jealous of Gary’s worldly travels, he does frequently find the stories pointless and often wonders: “Who gives a shit?”

Gary would have none of it, though. “You are the king of interrupting with useless information,” he told Shuli. “You come by and you do your stand-up act for me all fucking morning long in the hopes that I will laugh and put you on the air.”

Other Stern Show staffers didn’t feel so comfortable confronting their superior directly, so they recorded voice-modulated messages airing their grievances.

For instance, one anonymous staffer remembered a time when actress Mindy Kaling sent the office a package of bagels, cream cheese, and lox after her appearance. “Gary immediately took all the lox home with him—more than any one person would even enjoy. I imagine some of it got thrown out because there was that much lox,” the staffer recalled.

While Gary plead that he “genuinely” did not remember the incident, he did ask how one would split a package of lox, once again drawing the ire of Howard and the rest of the staff.

All grievances aside, be sure to wish Gary a very happy birthday today!