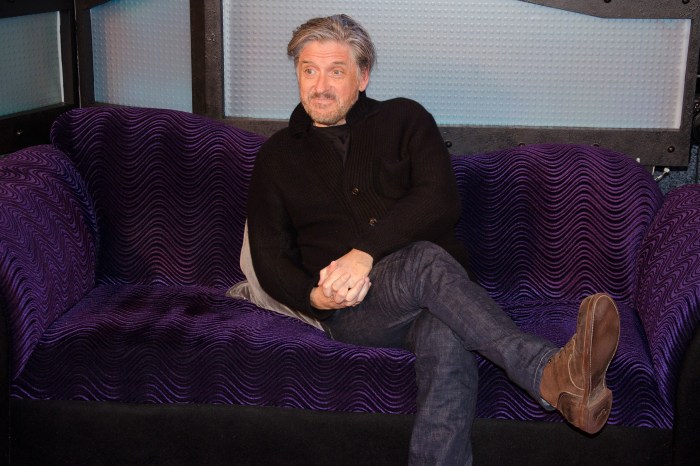 Craig Ferguson returned to the Stern Show Tuesday morning and opened up to Howard about some of his previous problems with alcohol. Craig is clean and sober now but there was a time when he was drinking so much, he’d forget a lot of what he did during the day, including shooting a TV pilot with Gwyneth Paltrow and Zach Braff. When he ran into Zach again years later, Craig had no recollection of ever working with him.

“I didn’t believe him until they showed me footage of us working together,” he told Howard.

Howard asked how much Craig could have been drinking in order to forget something as memorable as that. “I don’t know,” Craig answered. “The one thing about active alcoholism is you don’t really keep a journal.”

While Craig doesn’t recall that TV pilot, he told Howard he’ll never forget the time he tried to get buzzed on aftershave. “I remember sitting in a disused fountain in a park in Glasgow, sitting with a hobo. He said, ‘You want to try aftershave?’ I went, ‘Fuck it! OK! Let’s try it!'” Craig said. “That must have been 35 years ago, I’ve been sober 25 years, a lot of things have happened, but I can still taste that aftershave … the taste is so utterly revolting. I mean, it’s unbelievably bad.”

Craig also admitted to lying to a girlfriend once about his past, telling her he had been to prison. He explained to Howard that, while he’d spent plenty of time in drunk tanks, he’d never done hard time.

“I was trying to make myself sound more glamorous and more kind of like bad boyish,” Craig said. “I wanted to be an alcoholic who was dangerous and bad.”

Therapy has played a large part in helping Craig maintain his sobriety, though he hasn’t been in a couple of months. Howard asked if his sessions have helped get to the bottom of why he used to drink so much.

“I think it’s a genetic predisposition,” Craig told Howard. He said his father drank a lot, but Craig isn’t sure if that means he was an alcoholic or if drinking was just part of his culture. “In Scotland sometimes it’s hard to tell.”

Eagles guitarist Joe Walsh became a friend of Craig’s after the two met on the set of “The Drew Carey Show” — Joe did a guest spot on the ABC sitcom Ferguson spent nine seasons on. Craig told Howard he and Joe relate to one another a lot since they’ve both struggled with addiction.

“You don’t stop being crazy when you stop drinking. You still got to deal with the way your head is, so I like talking to Joe because I feel a kinship with him,” Craig said. But as close as they’ve become, Craig pointed out one stark difference between their pasts: “Joe was kind of more glamorous because he was a rock star while he was drinking … I was just a guy hanging around dumpsters.”