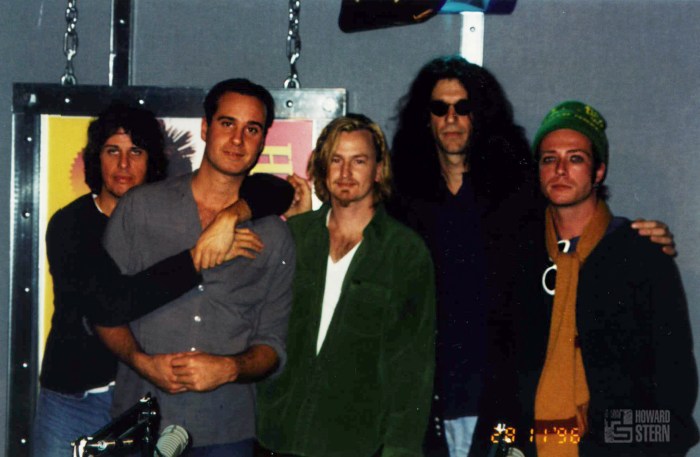 Fred Norris played listeners in Wednesday morning with the Stone Temple Pilots’ 1996 Stern Show studio cover of Led Zeppelin’s “Dancing Days” in honor of the 21st anniversary of their first appearance on the show. Listen to it (below).

By the time Wednesday’s show rolled around, Howard had already been awake for many hours after waking up at 2 a.m. and spending some time catching up on episodes of “Supergirl” on the CW and “Rock and a Hard Place,” the HBO documentary series from Dwayne “the Rock” Johnson.

In light of the headlines about Melissa Benoist’s romance with her CW co-star Chris Wood, Howard reminisced about his own experience on the set of “Private Parts” where he was treated like a true star. Robin Quivers recalled how Howard was looked after by a “nanny” on set who would tend to his every need.

There was even a person whose job it was to sit outside Howard’s door and make sure no one disturbed him—and he turned out to be acclaimed horror film director Eli Roth.

As far as any sense of normalcy behind the scenes, Howard noted that the most tame thing going on at the time was the fact that Jenna Jameson would walk around naked on the craft services line to the surprise of everyone else involved with “Private Parts.” Gary Dell’Abate further remembered that when she was asked to cover up by the director, it was only by a mere kimono which was often left open.