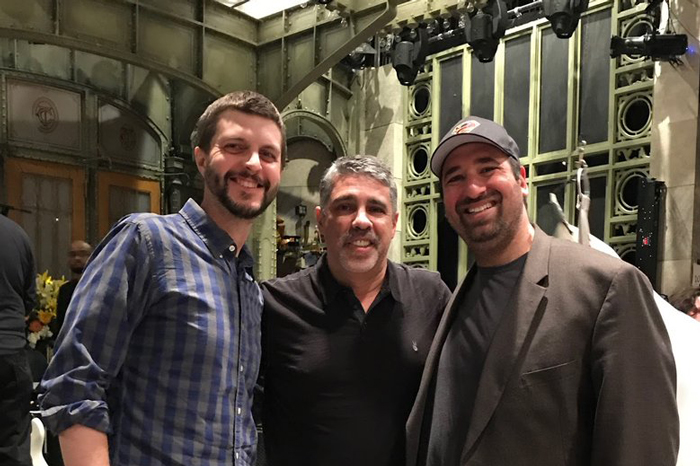 Will Murray, Gary Dell’Abate, and Jason Kaplan in front of the “Saturday Night Live” stage Photo: The Howard Stern Show

“Saturday Night Live” has a very strict “no phones” policy for all audience members—something Gary Dell’Abate learned the hard way over the weekend. Howard’s executive producer had to be scolded by an NBC page while attending an “SNL” dress rehearsal with staffers Will Murray and Jason Kaplan. The purpose of their visit was to learn the ins and outs of the late-night series and see if they should adopt similar practices for the Stern Show. However, a caller named Will who was also in “SNL’s” audience isn’t so sure Gary was paying attention.

“I know for a fact Gary didn’t learn anything at that ‘SNL’ show,” the caller told Howard. “Because the entire time he was on his phone and people kept coming up to him telling him to put his phone down.”

Will Murray entered the studio to corroborate the caller’s charge. “I caught him a couple of times. He was sneaking a peek at the phone,” Will told Howard. “I think he was following the French election.”

Gary didn’t deny looking at his phone but argued he was doing it 20 minutes before the show started. He also claimed there were others in the crowd doing the same thing. Despite his excuses, Howard told him how embarrassing it is to have one of his employees get caught breaking the rules.

“They’re producing a live show and they have to take time out to police you,” Howard said before coining Gary’s new nickname: Baba Bigshot. This incident reminded Howard of the time Gary went to the White House Correspondents’ Dinner and asked Bradley Cooper to come say hi to his table.

“Can you go somewhere and not embarrass me?” Howard asked as Robin laughed.

There were speculations from the back office that the reason Gary was on his phone was to line up dinner plans for after the show, even though he had already eaten with Will and Jason beforehand. According to Will Murray, Gary’s first dinner included “a big pile of rock shrimp.”

Coincidentally, the “SNL” episode Gary and the guys previewed included a sketch with a special Stern Show shout-out in it. Superfan Bobby Moynihan played a character named Sal Delabate (pronounced like Dell’Abate) and confirmed later the name was a mashup of Gary and Sal Governale’s names.

“The name Dell’Abate always gets a laugh,” Howard said while listening to the sketch.