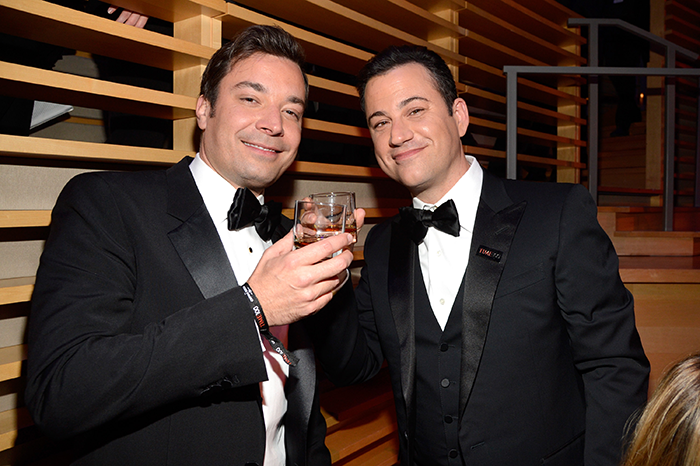 On Monday, Howard revealed that he brought fellow late-night hosts Jimmy Kimmel and Jimmy Fallon together for a dinner recently and on Tuesday morning he continued the story, telling listeners they had a great time along with wives Molly McNearney and Nancy Juvonen.

“These guys have great women in their lives,” Howard noted. Molly, of course, is the head writer on “Jimmy Kimmel Live!” while Nancy produces films under the Flower Films banner with Drew Barrymore.

When Drew stopped by the show in 2015, she told Howard about how Fallon and Juvonen met on the set of 2005’s “Fever Pitch” (below).

Howard also gave his side of a story Fallon told on “The Tonight Show” last week.

With his late-night show on break for two weeks, Jimmy took the opportunity to get an additional surgery on the finger he severely injured in a fall a couple of years ago. The procedure left his arm in a cast for a brief period.

“My kids didn’t sign it because they’re too little to understand,” he told his audience. But then he ran into Howard, who, upon seeing the blank cast, reportedly remarked: “How sad.”

“I was going to draw a big cock on his cast and then I realized he has kids … so I just signed my name,” Howard told listeners on the Stern Show. “I had a Sal moment,” he added with a laugh. 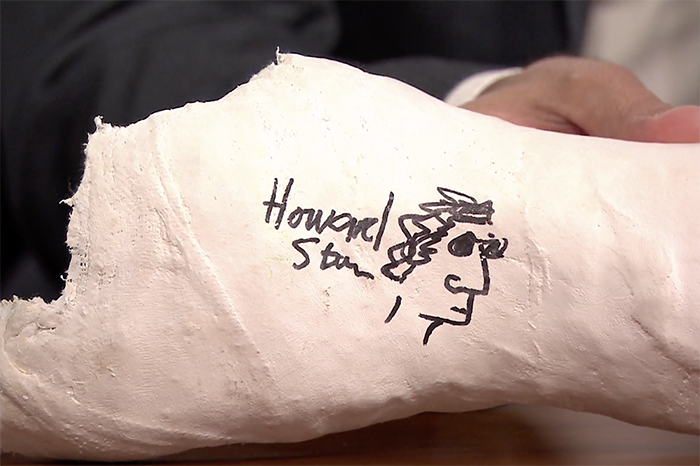 While his signature appeared on “The Tonight Show,” audiences will soon be seeing the King of All Media in the flesh on “Jimmy Kimmel Live!”

Despite the insistence by his longtime friend that there was “no pressure,” Howard said he felt he should appear on the show’s upcoming run in Brooklyn after Jimmy spent two days sitting in on the Stern Show. Stay tuned for the exact date.