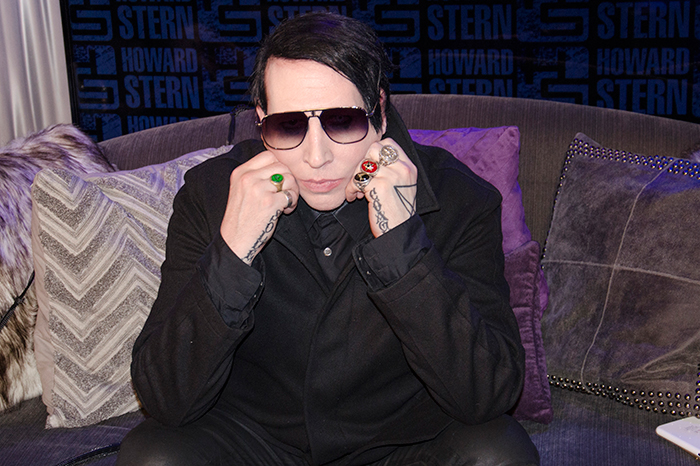 There was much to discuss during Marilyn Manson’s visit to the Stern Show on Tuesday morning, including his new album “Heaven Upside Down.” Marilyn has already released the single and music video for the track “WE KNOW WHERE YOU FUCKING LIVE,” but he has another video coming very soon. And this one will co-star his good pal Johnny Depp.

“I don’t want to spoil any of the video but … he’s like the White King, I’m sort of the Black King and I’m wearing latex,” Marilyn revealed about his upcoming music video. “We wrestled, like we fought each other like Cain and Abel, and I won. I’m gonna say I took him.”

The two might fight on screen but in real life, they’re close enough friends to have matching tattoos covering the entirety of their backs. Their ink is of the cover for French poet Charles Baudelaire’s book “The Flowers of Evil.” They also both have tattoos on their wrists that read “No Reason.”

“You know why we got that? No reason,” Marilyn told Howard with a smile.

With Marilyn’s 10th studio album due out next month, Howard wanted to go back and talk about the album that launched Manson into superstardom: 1996’s “Antichrist Superstar.” Nine Inch Nail’s Trent Reznor served as a co-producer on the record, including its hit single “The Beautiful People.”

“He was a great producer and he made that record happen, ‘Antichrist Superstar.’ No doubt about it,” Marilyn said on Tuesday.

But during an in-studio scuffle, Trent supposedly took the hard drive that had been recording the album’s tracks and smashed it. “For many years I thought that the masters for ‘Anitchrist Superstar’ were destroyed,” Marilyn explained. “I just felt heartbroken and mad and just never wanted to talk to him again. Because I just thought, how would you destroy something that you also made?”

According to Marilyn, the rift between them remained until Trent reached out to Tyler Bates (who produced Marilyn’s new album) and said he wanted to bury the hatchet. And when Trent finally talked to Marilyn, he shared some very good news with him.

“He told me that he had the masters still which made me very happy,” Marilyn told Howard. “The anger was gone.”

Marilyn added he doesn’t care about whatever words the two exchanged during their feud — what matters is they’re friends again.

Marilyn Manson’s persona is perhaps as famous as his hit songs and Howard wondered if his dark identity ever incited actual suicidal thoughts in him. Without any hesitation, Marilyn answered “never.”

“Self-destructive but I’ve never been suicidal,” Marilyn said, explaining he would cut himself and inflict pain on himself as a way of embracing “the concept of being threatened.”

Nowadays, Marilyn is working toward making his body stronger, taking regular Pilates classes with a personal trainer. Robin Quivers questioned how hard that workout must be.

“If you saw my training you’d say different,” Marilyn said. He even invited Howard to feel how tight his ass is now.

“Oh yeah, that’s a nice ass!” Howard said with a laugh while copping a quick feel.

Marilyn Manson’s new album “Heaven Upside Down” is available Oct. 6. To pre-order and for tour information, go to MarilynManson.com.