“It's my 'Cheers.' I go there all the time. I freaking love it,” he tells Howard 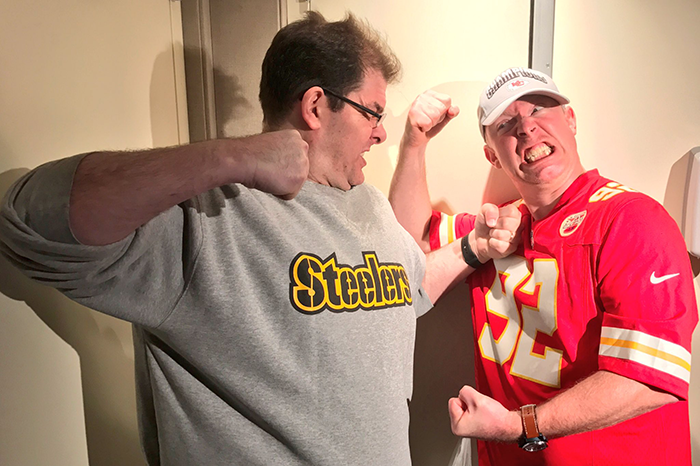 Responding to a question from a caller about his alcoholic beverage of choice Tuesday morning, Howard admitted that he isn’t much of a drinker these days. After getting a recommendation from his doctor, Howard said he limits his intake to one or two drinks per week, due to the results of a liver function test. “I get one glass of wine,” Howard explained. “It’s usually red, full-bodied, like a cabernet.”

Howard joked that any fun he has immediately gets put to an end while guys like Richard Christy can drink constantly and seemingly do just fine. Robin reminded him that while Richard’s liver may be doing alright, his brain cells were certainly taking a hit from all of the alcohol consumption.

In fact, Richard confessed that he barely remembered getting home from a bar over the weekend. The Kansas City Chiefs took on the Pittsburgh Steelers on Sunday and the Stern Show staffer took that as an opportunity to begin drinking at noon for an 8:20 p.m. game at his favorite local Kansas City-style BBQ joint and bar. “It’s my ‘Cheers.’ I go there all the time. I freaking love it,” he told Howard.

This particular Sunday, Richard took down about 11 craft beers that ranged upwards of 9% ABV. “I love the taste of beer,” he said.

Gary Dell’Abate and JD Harmeyer both reported that Richard also gets dressed up in full Chiefs regalia to go to the bar – complete with a jersey and black face paint. Check out the photo below.

My outfit is ready to have some @Boulevard_Beer spilled on it @JohnBrownSmoke when Im jumping for joy for The @Chiefs tonight #ChiefsKingdom pic.twitter.com/soboY48XU3