Cocktober thrusted forward Monday morning with George Takei live in the studio and ready to decide which celebrity had the best-looking penis out of a selection of eight famous studs who have shown off their manhood at one point or another.

Their impressive physiques only proved to distract George from the task at hand. “The pectorals are great,” he described of Austin, noting that he also has a “beautiful cock.”

Contemplating each matchup thoughtfully, George told Howard he needed to judge the whole package of each star. He was ultimately most impressed by finalists Daniel Craig, who struck an intriguing pose in his photo, as well as Michael Fassbender, who sported a “lean body.”

In the end it, was Fassbender who took the title of George’s favorite Hollywood penis, but he was complimentary of each celebrity’s attributes.

Check out the full bracket below and be sure to head over to MrMan.com if you’d like to see uncensored photos of the film phalluses. 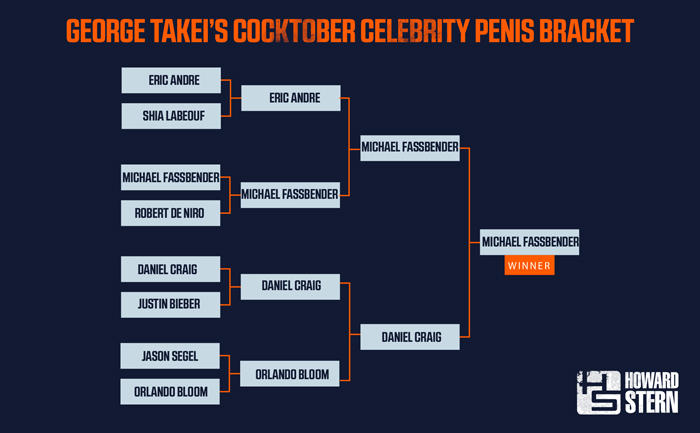 For more from Austin Wolf and Johnny V, be sure to check out Falcon Studios where the code “Cocktober” can get you 50% off.