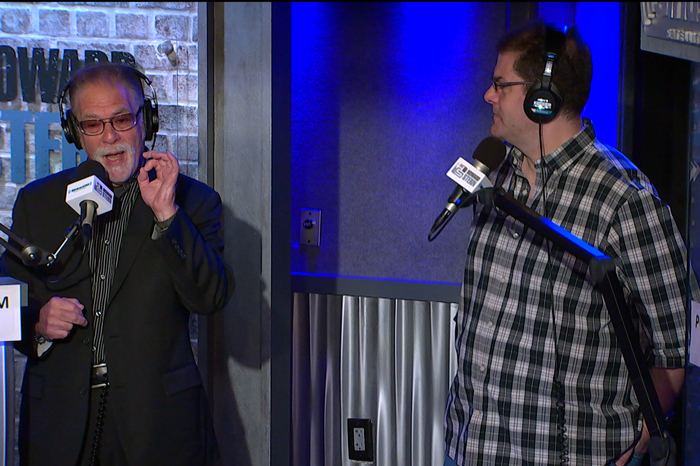 Ronnie Mund continues to prove his personality cannot be subdued while performing his duties as a limo driver and security guard. Despite Howard’s constant insistence that he simply stay quiet in the hallway, Ronnie reportedly ran around the office Tuesday afternoon flashing a NSFW photo at some of his coworkers with little to no warning. He even showed his boss, Howard.

“You should study Jon Hein. Be like him,” Howard told Ronnie on Wednesday, referencing Jon’s notoriously quiet and stoic demeanor.

And while Ronnie denied showing anyone the photo without a proper heads-up, both Jon and fellow Stern Show staffer Jason Kaplan corroborated Howard’s account of the events.

“I am so glad I don’t run an HR department,” Howard said with a laugh.

Robin just wondered how Ronnie had time to find all of these photos.

“I was sitting on the toilet. Is that ok?” Ronnie shot back.

Nevertheless, if he offended anyone in the office, Ronnie offered that he was “seriously” sorry.

One person he refused to apologize to, though, was Bobo. The two engaged in a war of words over Twitter recently with neither willing to back down.

The frequent caller has been floating the idea of giving Ronnie a driving test but Howard’s limo driver would not even entertain the thought.

“He will never get in my fucking car!” Ronnie exploded.

You’re not on my level at all. You’re a Wanna be Hack!

Howard took the opportunity to remind Ronnie the listeners should be treated with respect, even Bobo.

Consequently, Ronnie announced he would ban Bobo from his Twitter account effective immediately so that there would be no interactions—positive or negative—between them.

“I can’t believe what a baby you are,” Bobo retorted.