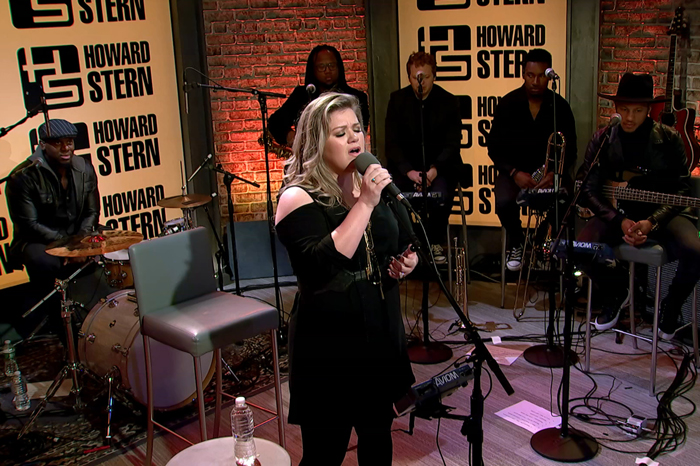 A full band accompanied Kelly Clarkson to Wednesday’s Stern Show, including a three-piece brass section and a well-warmed up trio of backup singers. The pop superstar put on a mini concert for Howard and Robin, singing several of her hit songs as well as the first single off her new album “Meaning of Life,” out now.

Kelly also looked back at her time on “American Idol,” the reality series that made her a household name, and dished about dating one of her fellow contestants.

Check out all the highlights and live performances from Kelly Clarkson’s Stern Show debut (below).

Some people wait a lifetime for a moment like Kelly Clarkson had on the Season 1 finale of “American Idol.” As the first winner of Fox’s smash hit, Kelly became a celebrity overnight. But she told Howard it took her a while to even realize how much “Idol” would change her life. For starters, she didn’t even know she’d be on television when she initially tried out for the series.

“I didn’t know it was a TV show until the third audition,” Kelly said. And when she found that out, she had her doubts the show would be successful. However, the reality series offered her a chance to get back on her feet after having a hard-luck experience in Los Angeles that included her apartment burning down.

“I thought it would pay a bill,” Kelly said of competing on “Idol.”

Fourth in line on the morning of her first audition, Kelly continued on round after round in the competition. She was a fan of Randy Jackson’s and knew Paula Abdul’s songs, but she had no clue who judge Simon Cowell was — and he didn’t recognize her either, even well into the competition.

“He didn’t even remember me,” Kelly said of Simon, telling Howard how Simon once remarked on the show she wasn’t memorable enough. “In his defense, my hair color was completely different.”

Check out Kelly preforming “A Moment Like This” (below).

Her First (and Last) Movie 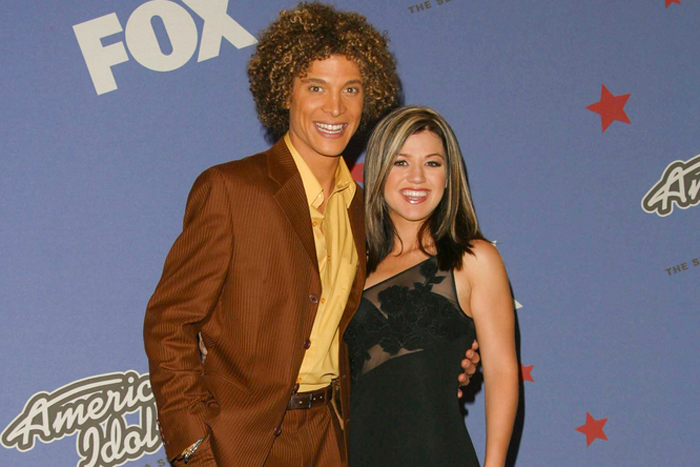 There was more to winning “American Idol” than just a recording contract. Kelly was also obligated to star in a feature film along with the show’s runner-up Justin Guarini. She was far from interested in being an actress, though, and even called “Idol” creator Simon Fuller crying, begging him not to make her do the movie.

Kelly had to go through with shooting the film “From Justin to Kelly,” which turned out to be as just as bad as she thought it would be. Luckily, Fuller did agree to release Kelly’s first single before releasing the film, so that fans would get to know her music before getting to know her acting.

“I think that’s what saved my career,” Kelly told Howard. “I’m glad I didn’t want to be an actress because it would have ruined that dream.”

She’s only seen “From Justin to Kelly” once — at the film’s premiere. “I got very drunk,” Kelly admitted with a laugh. “I literally ended up in a fountain, soaked. I was real hammered. I was like, ‘Jesus, take this away from me.’”

Kelly also confessed that she and her co-star did date, although only after all of the rumors of a romance between she and Justin had died down.

“When people thought we were dating, we weren’t,” Kelly told Howard. “And then, you know, you’re shoved together so much … we did try it but, yeah, we’re just not similar enough. I’m not a fan of opposites attract.” 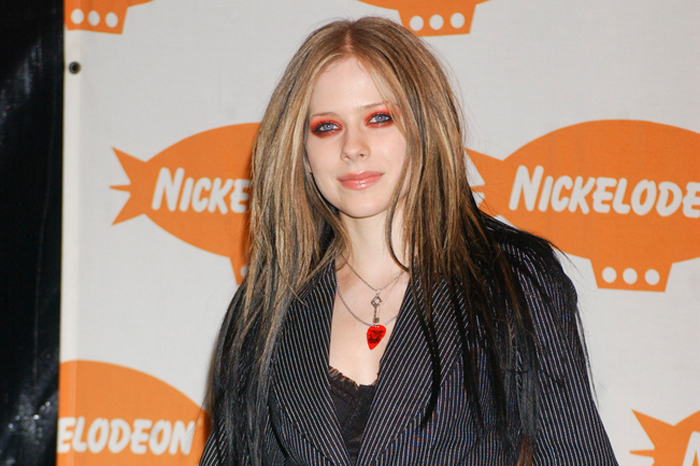 Since she was able to achieve so much success so quickly, Kelly said she felt others in the music industry resented her. She revealed she got elbowed in the face once while presenting someone with an award. Howard guessed correctly that it was Avril Lavigne, who actually went on to write Kelly’s hit song “Breakaway.”

“I think what I was bummed about is I’m a fan of hers,” Kelly said. Years later, Avril approached Kelly and explained she didn’t mean to knock into her. Whether intentional or not, Clarkson said she remains a fan.

Check out Kelly performing “Breakaway” (below).

‘Since U Been Gone’ and ‘Because of You’ 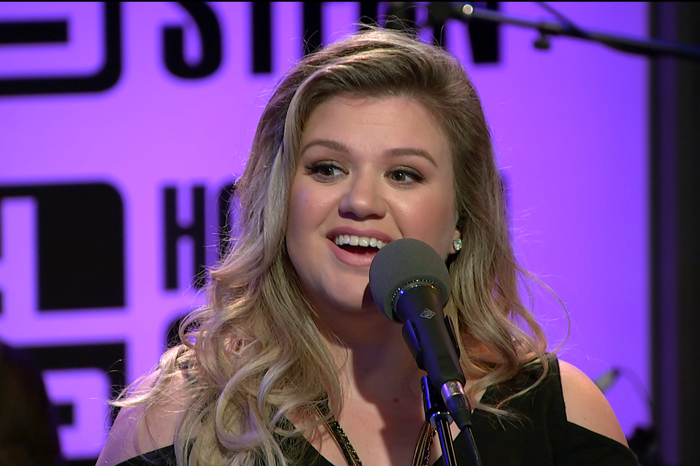 It became one of Clarkson’s biggest hits but the song “Since U Been Gone” was originally offered to pop star Pink, who turned it down after initially hearing the demo.

“I wish to God I still had the demo,” Kelly said. “Because it sounds very different, Howard.”

Kelly heard it and almost passed on the song herself. It wasn’t until she and her producers put their heads together and added a pop-rock edge to it that Kelly felt comfortable enough to include it on her second studio album, “Breakaway.”

Check out Kelly singing “Since U Been Gone” on the Stern Show (below).

Also included on “Breakaway” is “Because of You,” a track Clarkson had to fight hard for. Its lyrics describe Kelly’s painful childhood and relationship with her father. But as honest and strong as the song is, she told Howard there were several in her camp who didn’t want to put out the song, including producer Clive Davis.

“They said it was shitty because it didn’t rhyme,” Kelly explained. “It was a general consensus it was a shit song.”

After not backing down, Kelly released the song and the charts proved her persistence was worth it — “Because of You” became Kelly’s sixth single to crack the Top 10.

Hear Kelly sing “Because of You” (below).

Her New Album ‘Meaning of Life’ 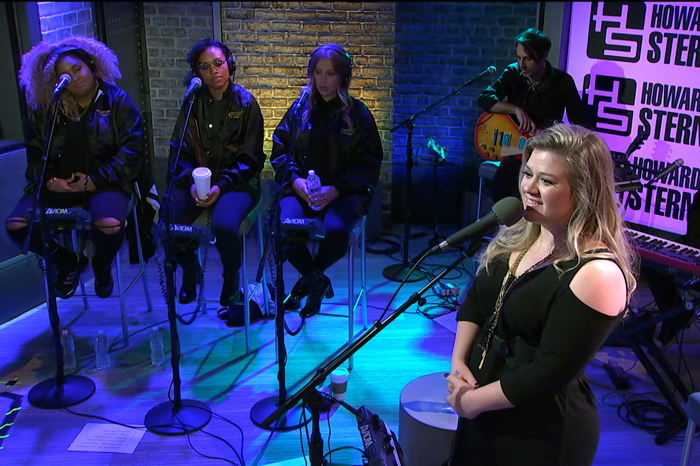 With the release of her eighth studio album “Meaning of Life,” Kelly Clarkson says she’s now finally singing the songs she wants to sing. She told Howard, while she loves and stands by the music of her past releases, they all included “a lot of compromise.”

Leaving her longtime label RCA, Kelly is now with Atlantic Records, which gives her the freedom she’s always wanted. “Not only that, they’re excited,” Kelly said. “They’re really stoked about the whole idea of making … this 2017 soulful pop.”