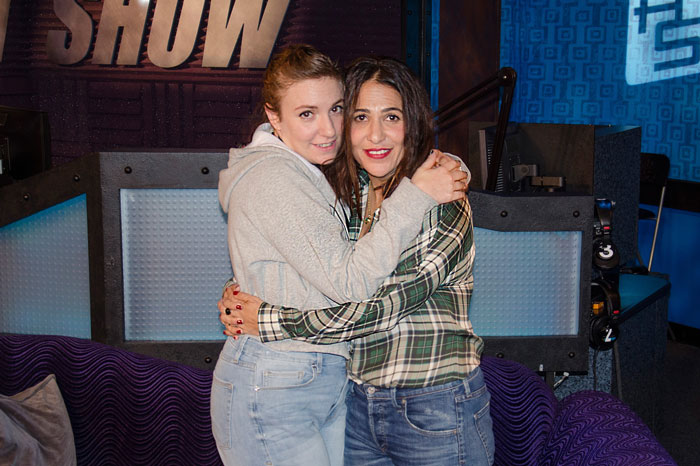 Lena Dunham’s hit HBO series “Girls” is gearing up for its final season on the air, starting Sunday Feb. 12. But before she bids TV adieu (for now), Lena had a whole lot to tell Howard about what he can expect to see in Season 6, as well as some behind-the-scenes stories from the set.

Check out the many highlights from Howard’s Monday morning interview with Lena Dunham (below). 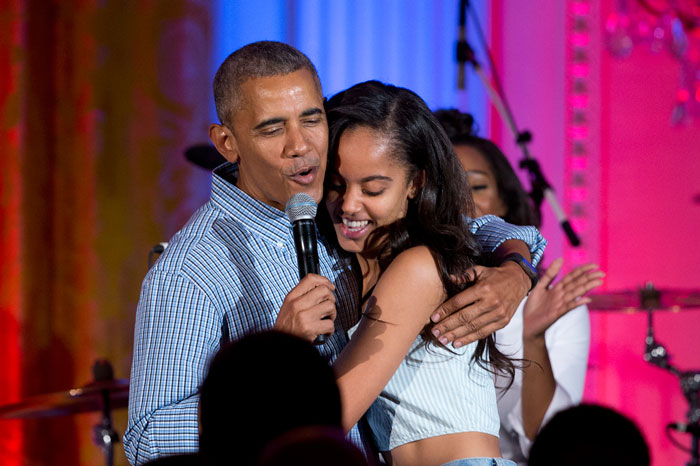 President Obama’s oldest daughter not only watches the show “Girls,” she also got to work on it as an intern. Howard asked Lena how the former First Daughter got her gig on Lena’s TV series.

“She was interning at HBO and they thought, what if she comes a couple of days a week to the set of ‘Girls,'” Lena told Howard. “Obviously, we weren’t making her go get our coffee … but she wanted to do all the jobs, that was the cool thing.”

Instead of sending her out on errands, Lena said they made Malia a writers’ assistant in training. When Malia came to set, though, the Secret Service had to come, too. Lena described trying to enter a bathroom outside of her office one day and being stopped by an agent standing guard at the door.

“There was a guy outside and he just was like, ‘No.’ And I was like, ‘What?’ I was like, ‘That’s my bathroom.’ And he was like, ‘No.'” Lena said. That’s when she realized that, even though she knew Malia well, there are certain precautions the Secret Service must always take.

“You can’t just let anyone into the bathroom with the president’s kid,” Lena said.

For the most part, Lena Dunham doesn’t care what people say about her on Twitter — she’s not bothered by people talking about her body and calling her fat or having trolls take issue with her politics and calling her names like “libtard.” But she told Howard there is one criticism that does affect her.

“I care if I feel that I have isolated a group of people who already feel marginalized in America or said something that is insensitive to the struggle of people who are already being repressed by our current governmental regime,” Lena explained. While it’s easy to get defensive, Lena said she tries to listen whenever someone says they feel wronged by something she did.

In the past, Lena has admitted to being addicted to reading what online commenters say about her, but on Monday she said those days are behind her. “Some feedback is great and healthy and I learn from it. And some of it is just psychotic, cruel garbage,” she explained.

Even if her harshest critics don’t bother her in the moment, Lena does wonder what the long-term effects might be from so much online negativity. “It’s almost like if you lived next to a construction site for 30 years and you were like, ‘I’m fine with it’ and then suddenly you realize … I’m deaf,” she said. 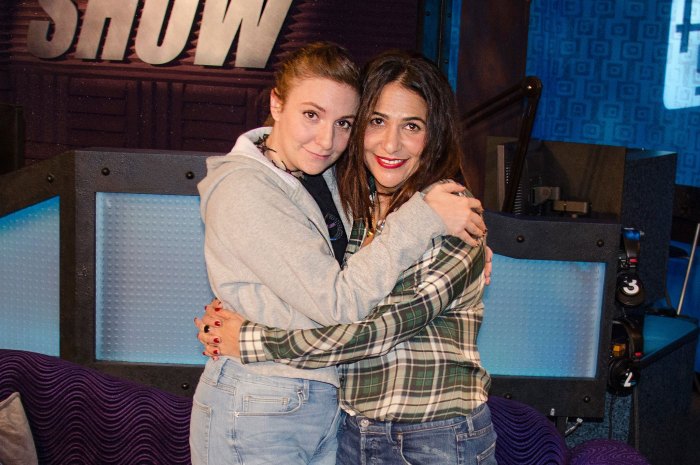 Every day, Lena Dunham wakes up and texts her creative partner Jenni Konner to make sure she’s not dead — that is how much she cares about her. Like Lena, Jenni is a huge fan of Howard. She also came into the studio on Monday to talk about making the final season of “Girls,” her and Lena’s new feminist newsletter Lenny Letter, and the strange job she had in Hollywood before teaming up with Ms. Dunham.

“I was punching up female parts in male driven movies,” Jenni told Howard. One such movie was “Transformers: Dark of the Moon,” the third installment in Michael Bay’s robot action franchise. With Megan Fox abruptly leaving the film and being replaced by Rosie Huntington-Whiteley, Jenni said she was brought to the set to feed the actress lines as they shot the movie.

“They literally didn’t even have time to change the part,” Jenni said. One suggestion she made came during a scene in which Rosie was exiting a car wearing an almost see-through dress.

“She shows up and she’s going to meet Shia LaBeouf and she’s there and she’s like talking about the car she just drove,” Jenni explained. “And I was like, ‘Should she have like a key or like a purse or like, anything?'” Howard laughed, agreeing that the character should probably show up with something more than just her sexy outfit.

Jenni’s father also did script punch-ups and polishes, so she’s no stranger to improving someone else’s words. She told Howard that perhaps no one was better at improving a movie script than the late Carrie Fisher, saying she “cornered the market.”

“She wrote all the emotional parts of [a script],” Jenni explained. “If those movies ever made sense emotionally, it’s because Carrie Fisher spent, like, three days working on it.”

Howard was lucky enough to get his hands on the first few episodes of “Girls” Season 6 and he talked to Lena on Monday morning about her nudity in them.

“Bush and titty, baby. I went for it,” Lena said with a laugh.

Howard asked if that bush was all Lena or if she wears a merkin on the show.

“I grow my own bush,” Lena revealed, saying she prefers that look in real life, too. “I just think I look better with it. It’s not a feminist statement. I don’t care what anybody does with their pubic hair, but I personally feel like, because of my body type, without it I literally look like a giant baby.”

The Recipe for Fake Semen

“Girls” fans can also look forward to another appearance by fake semen on the show’s sixth season. Howard asked Lena what goes into the concoction they use on camera.

“It’s like a mixture of conditioner and Cetaphil,” she told him. Actress Shiri Appleby was willing to have some of the semen substitute smeared on her body for a scene, but it was Lena who was disgusted by the creamy mixture. “It’s so gross because it’s like a prop guy walking around with like a rubber glove and like a little squeegee, putting it on you,” Lena said.

The brass at HBO didn’t fight Lena on having stagnant semen on the show but did have a problem during an early episode where the fluid was airborne.

Michael Lombardo was the head of the premium cable network at the time and took Lena’s call that day. “He was like, ‘Lena, are you really going to fight me on this?’ And I was like, ‘No. Have a great day.’ I’m fully defeated before I even started,” Lena recalled.

Even if she wasn’t allowed to shoot that scene, Lena had nothing but nice things to say about the network “Girls” calls home. “HBO has been so supportive. They have truly only ever given us smart, emotional notes. We haven’t had the typical TV experience,” she told Howard. “If anything, they say, like, push it further, do what you need to do.” 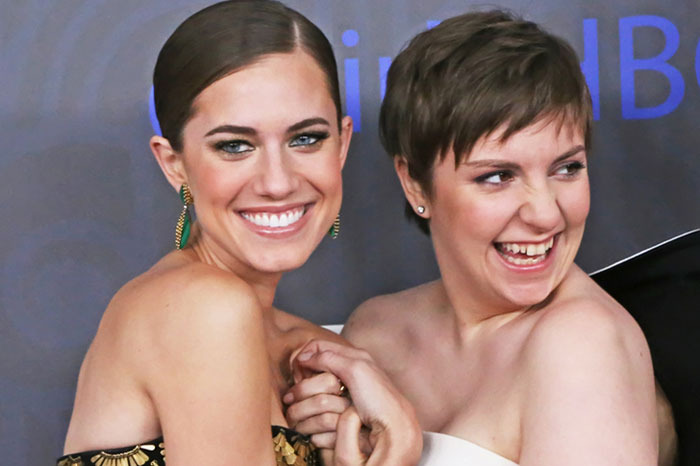 Not everyone on “Girls” is willing to get as naked as Lena. She told Howard how her cast mates have very specific and well-known boundaries for what they will and will not do on camera. For co-star Allison Williams, bare breasts are off limits but the side of her butt is fair game. With that in mind, Lena talked to Howard about writing the now-infamous ass eating scene that had everyone talking after it aired. Turns out, it was never supposed to be Allison’s ass being eaten.

“Allison was amazing about it, but what I wrote is that she was getting eaten out from behind,” Lena revealed. “And then, once we were on set, Ebon [Moss-Bachrach] made a strong, actorly choice to eat her butt instead and motorboat it and we just couldn’t believe it was real.”

Williams herself explained to Lena why she felt comfortable and why it made sense to have her normally high-strung character be involved in such an eye-opening sex act. “The reason she loved the scene and wasn’t resistant to doing the scene was because she felt that it was true growth for her character which was this moment of abandon,” Lena said.

Lena and Jenni also told Howard that, whenever they write a sex scene in a “Girls” script, the two of them take pictures of themselves, fully clothed, in the desired positions — Allison’s ass eating scene was no exception. Neither of them is usually shocked by anything they write, either.

“What we do in ‘Girls,’ they do in ice cream commercials in France,” Lena said.

In 2013, Lena Dunham won a Golden Globe for her stellar acting on “Girls.” What she did not win a Golden Globe for was her performance on HBO’s “Mildred Pierce,” probably because she got cut from it entirely. Lena was a good sport while telling Howard about being dismissed from the set of the 2011 Kate Winslet miniseries.

“They auditioned extras and I was sent home,” Lena admitted. Though she was cast as a 1940s nurse, Lena said she could not make her dialogue match the time period, speaking instead just as she would I her everyday life. That probably has something to do with the pep talk her mom gave her before showing up to the set that day.

“I asked my mom for advice which was the worst idea,” Lena told Howard. “She said, ‘They’re hiring you to be yourself. Just go there and be yourself.'”

Once it became clear that producers were unhappy with her performance, Lena said she was stricken with an attack of “true dissociative anxiety.”

“I remember thinking, if I collapse right here, they’ll have to take me home in an ambulance and that will be better for everyone involved,” she told Howard.

All’s well that ends well, however, and she told Howard how she would later work with the same producer who dismissed her that day. “The funny thing is, the producer, Ilene Landress, ended up being the executive producer of ‘Girls,'” Lena said. “So the person who was downstairs, auditioning other people for my part, ultimately ended up producing our show.” 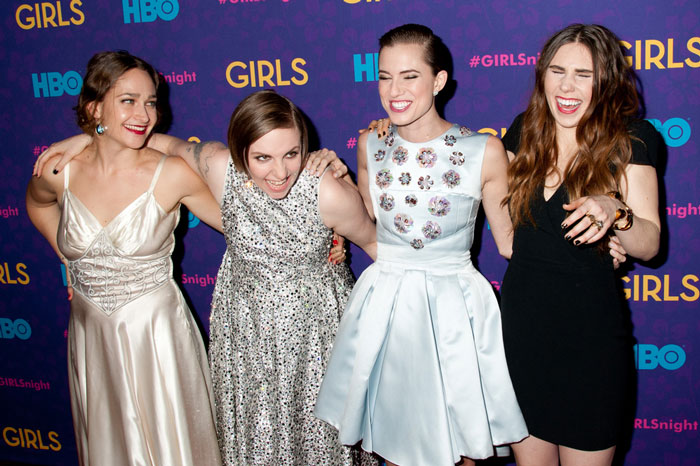 The cast of “Girls” on the red carpet Photo: PRPhotos

As her series comes to a close, Lena offered Howard an explanation for why she’s choosing to end “Girls” now.

“Part of why we have to stop is I can’t think of any more weird ways for people to fuck,” she joked.

Jenni offered some insight as far as what the season finale might entail. “I think that we sort of wrap it up but in a ‘Girls’ way,” she said. “It’s never going to be a super-satisfying, tidy ending.”

She did confess that she and Lena made a “strong choice” for the final episode. As for whether a “Girls” movie is in the works, Lena said she’d love to make one but not any time soon.

“We’d like to find them in a new place,” she told Howard. A feature-length story for Hannah, Marnie, Jessa, and Shoshanna will just have to wait.