Known storyteller Craig Ferguson stopped by the Stern Show on Tuesday and told Howard about the time he asked out actress Sharon Stone after she was a guest on “The Late Late Show.”

“We just had dinner,” Craig said of his night with Sharon. “I gotta be honest, the whole time I was thinking about that scene in ‘Basic Instinct.'”

In addition to picturing Sharon in one of her most memorable movie moments, Craig said the date didn’t quite work since it just felt like a continuation of their TV interview. “I think she felt awkward and I felt awkward,” Craig admitted. “I think we both survived that quite well.” 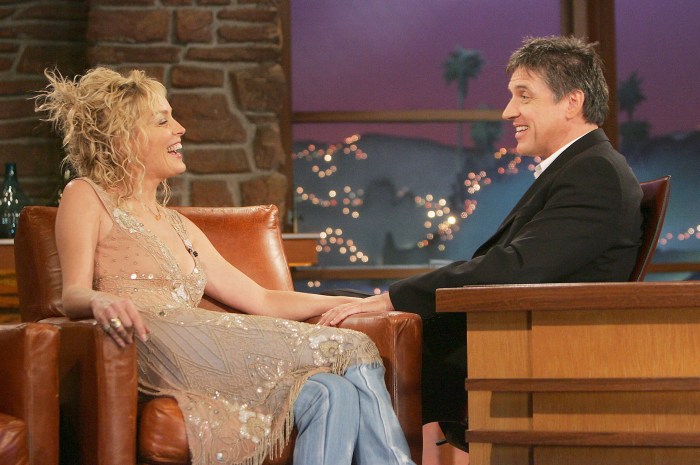 Sharon is the only guest Craig ever asked out but she certainly wasn’t the only Hollywood stunner to appear on his show. He learned early on, though, not to rely on his staff to help him craft questions to ask all of these beautiful women.

Craig also found out in his first few shows that, as nice as all of these pretty ladies were to him, he really didn’t have a shot with any of them. “You kind of realize it’s a game,” Craig said. “They’re pretending that they’re gonna, but they’re not gonna fuck you.”

It wasn’t long before Craig met his wife Megan and was pulled off the market for good, anyway. According to him, he was glad to become a taken man. “Once we got together, that was it,” Craig told Howard. “I think it saved me, to be honest. I think I would have made a fool of myself.”

Ferguson got his late-night hosting gig in 2005 after Craig Kilborn stepped down as host of “The Late Late Show” and CBS held tryouts to find his replacement. Ferguson had held many titles in his life (electrician, punk rocker, sitcom star), but he’d never worked in late-night TV before.

“I didn’t really know about this world at all,” he admitted

“Late Show” producer Peter Lassally had seen Craig as a guest on “Late Night with Conan O’Brien,” however, and recognized his talent. “Peter schooled me in it because he was like Yoda. He knew everything about it,” Craig said of Lassally’s late-night know-how. One note Lassally gave Ferguson was that he needed to lose his “creepy laugh.”

Even though David Letterman had a financial stake in “The Late Late Show” (his company World Wide Pants produced the series) Craig told Howard he didn’t meet with Dave after winning the hosting job — the two only ever met when Craig was a guest on Dave’s show.

“We talked on the phone a few times and he was nice to me at the beginning,” Craig said.

“I said, ‘Rob, it’s my first fucking day.’ But after that, he was great,” Craig told Howard.

For nine years, Craig followed Letterman in the 12:30 a.m. time slot, but after David announced his retirement Craig realized he was ready to leave late-night as well. “If I do anything for that amount of time, I can’t, I just can’t,” Craig told Howard, explaining that he had grown bored with his television job.

He said he didn’t covet Dave’s seat but expected to be considered for it. “I didn’t want it but I guess when it started to circle, you start to think, ‘Are they going to ask me to do it?’ Because you don’t want to go to the party, but you kind of want to be asked to the party,” Craig said.

With his mind made up, Craig exited “The Late Late Show” and did not take over for Letterman. This left him without a TV gig but the terms of his CBS contract left him eligible for a payout, which Howard heard equaled $5 million.

“That is not true,” Craig said of the bonus, though he couldn’t say much more than that. “I’ll tell you why I can’t be totally honest about it, because there’s a clause in the contract that says I can’t talk about it.”

However, when Howard asked if he was close with guesses of a $5 million bonus and a $10 million a year salary, Craig answered “in that neighborhood.” Craig then revealed CBS President and CEO Les Moonves actually gave him more money than he had to.

“It was totally fair,” Craig said. “It was a handshake deal with Moonves and he totally showed up. I mean, he actually put a little bit extra in at the end as well. Yeah, he tipped me on the way out the door.”

His memories of hosting “The Late Late Show” are fond but Craig told Howard he doesn’t miss having a nightly TV talk show. He also rarely watches anything on late-night anymore unless he sees something making the rounds on the internet, which happens quite a lot for his successor James Corden.

“He’s such a sweet guy,” Craig said of Corden, whom he spoke to before passing off the “Late Late Show” torch. “I think that he could have waited maybe an extra six months to be as successful as he was after he took over for me,” Craig joked.