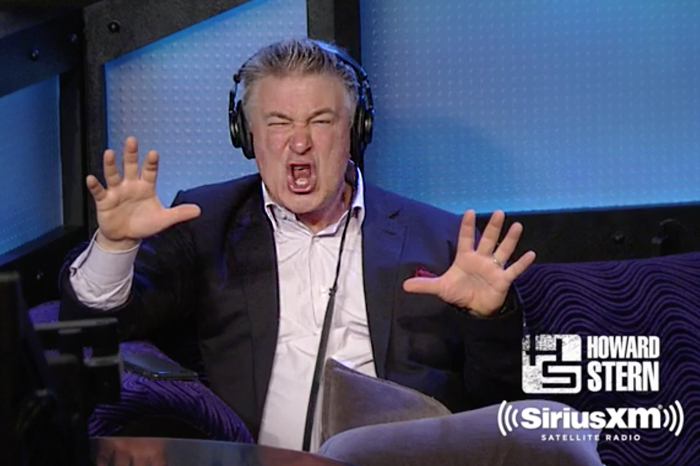 Alec Baldwin was back live on the Stern Show Wednesday morning to talk about all that’s going on in his life right now: releasing his new memoir “Nevertheless,” enjoying fatherhood, and of course his stellar impression of President Donald Trump on “Saturday Night Live.” Now making regular cameos as the commander in chief, Alec told Howard just how he pulls off the perfect Trump.

“You’re trying to bite the face off of the person in front of you,” Alec said of how he contorts his face while playing the president. He also wears a bit of makeup but doesn’t use any prosthetics for the character. “The wig is everything. Once they put the wig on you, you’re home,” he told Howard.

Baldwin isn’t afraid of running into ramifications for impersonating the president. In fact, he revealed Donald was even recently invited to share the “SNL” stage with him. “We tried to get him to come on,” Alec said. However, the plan for a presidential walk-on didn’t pan out.

Howard asked if Alec would be endorsing Trump and his policies by appearing with him on the late-night series. “‘SNL’ is an entertainment show,” Alec answered. “It’s there to entertain and then, when that’s over with, I don’t hold back.”

The accolades he’s received while walking around New York have proven to Alec just how much audiences adore his “SNL” guest spots. “I’ll walk down the street, it is not to be believed,” he said. “People love you because you’re channeling their hatred.”

He also shared how well received he’s been by the “Saturday Night Live” cast, telling Howard, “They’ve been nothing but gracious to me.” Alec praised his frequent co-star Melissa McCarthy (who plays White House Press Secretary Sean Spicer), as well as “SNL” head writers Chris Kelly and Sarah Schneider. But it was Kate McKinnon, Alec’s Hillary Clinton counterpart, that he singled out in his book, stating that he fell in love with her talent. Alec told Howard he’s felt admiration for several women whom he’s shared the stage and screen with: Tina Fey, Mary-Louise Parker, Jennifer Jason Leigh, and Mary Stuart Masterson, just to name a few.

The decision to play Trump on “SNL” wasn’t an easy one for Alec. He told Howard he was torn between taking that gig and doing an independent movie with Woody Harrelson. “SNL” creator Lorne Michaels called Alec about doing the impression and Alec initially turned him down, but he had second thoughts after financing on the film fell through.

“I call up Lorne, I go, ‘I’m Trump. I’m ready. Let’s go,'” Alec recalled. Michaels is someone Alec has put his trust in before and compared their working relationship to Robert De Niro and Martin Scorsese’s longtime cinematic partnership.

“[Lorne] convinced me to do ’30 Rock.’ It’s the best experience I’ve ever had in my life,” Alec said. As for how long he’ll keep coming on and playing Trump, Alec hinted that might all depend on how long the president stays in office.

“I’m gonna go to the season finale which is May 20th,” Alec said. “And then, whether I come back or not, who knows?”

Playing Trump on “SNL” has become yet another iconic role in Baldwin’s career, but he still remembers his first acting gig on the TV soap opera “The Doctors.” Alec told Howard he got that job while waiting tables in New York. A woman eating at his restaurant was taken by Alec’s good looks and set him up with her friend, a daytime TV casting director. His TV father on the series was played by actor David O’Brien and the two formed a very close relationship.

“I worshipped him. I loved him. I was in love with him,” Alec admitted.

There was never anything physical between them (and definitely never a desire on Alec’s part), but he did tell Howard about questioning what exactly he felt for O’Brien. “I say to myself, ‘What is it to be gay?’ Meaning, I was in love with him as anybody I’ve ever dated. I loved him. Love meaning, I’m happy when I’m around him and I’m not happy when I’m not around him,” Alec said.

O’Brien died in 1989, just as Alec and he reconnected after losing touch for several years. While Alec and David had an undeniable connection, the same could not be said of the gay theater producer who once stopped Baldwin on the street and used an unforgettable pickup line on him, asking: “Is your ass as hairy as your chest because, if it is, I’d like you to sit on my face for a couple of hours.”

Alec also writes in his book of the time his former agent tried to make out with him, much to Alec’s surprise. After pulling away, Alec warned him never to try anything like that again. “He and I were best friends for 11 years after that. He never did it to me again,” Alec told Howard.

Stories from his past are what Alec said his publishers were most interested in putting in his memoir. Before agreeing to give him the book deal, though, Alec said they asked him to send in a writing sample.

“They said ‘Would you send us a writing sample because we really don’t quite know what your style is as a writer,'” Alec said. “So I gave them three, four thousand words, when I overdosed on cocaine back in the ’80s, and they went, ‘We love this!'”