Hank Azaria’s tenure on “The Simpsons” has spanned decades and garnered multiple awards. However, as Hank told Howard, his time on TV’s longest-running scripted show began with a failed pilot.

It all started when Hank voiced the title character in “Hollywood Dog,” an animated Fox pilot that never saw the light of day. However, the “Dog” still wound up paying huge dividends for Hank. “It was the casting director at Fox … who knew me from [“Hollywood Dog”] and had me come and read for Moe the bartender,” he told Howard.

Hank explained to Howard the origins of Moe’s distinctive voice. “I was doing a play at the time in L.A. I was playing a drug dealer and I was doing a very bad [Al] Pacino—early Pacino like from ‘Dog Day Afternoon,'” Hank said. “And I did that voice—in the play and for the audition—and they said, ‘Well, we want it gravely.'”

“So, if you make Pacino gravely, you get Moe the bartender,” Hank revealed. “That’s all it was.”

When Hank went in for the audition, he obviously no idea that it would become the phenomenon it is today, but he had a feeling it would be a success. “I went to some L.A. film festival where they showed the [‘Tracey Ullman Show’] ‘Simpsons’ shorts and, based on the crowd response to that, it was like … this is striking a chord with folks,” Hank told Howard.

“The Simpsons” had three visionaries at the helm with James L. Brooks, Sam Simon, and Matt Groening, the latter two of whom Hank auditioned for initially, but it was a decidedly unceremonious affair. “It was so casual. They were like, ‘That sounds good, come record it,'” Hank recounted. “I was like, ‘Now?’ They were like, ‘Yeah.'”

For Hank, the casting came with a retroactive twist. “I found out years later there was another guy who played Moe,” he revealed. “I asked Matt Groening … ‘For twenty years I meant to ask you, what was wrong with guy?'”

Groening evidently told Hank that the original Moe, while a good performer, was “just a dick.” The actor in question, the late Chris Latta, had been the voice of Cobra Commander on “G.I. Joe,” among others. “Back in the early days of the [‘Simpsons’]—Jim Brooks is pretty perfectionistic and obsessive—we did a lot of takes,” Hank said. “This guy went off, ‘I’m the voice of [Cobra Commander], man. Okay? I don’t need to do take 11.’ He flipped out.”

The outburst apparently helped Hank secure a permanent spot on one of the most successful television series of all time. “He’s the Pete Best of ‘The Simpsons,'” Hank exclaimed. “Think about what he gave up!” 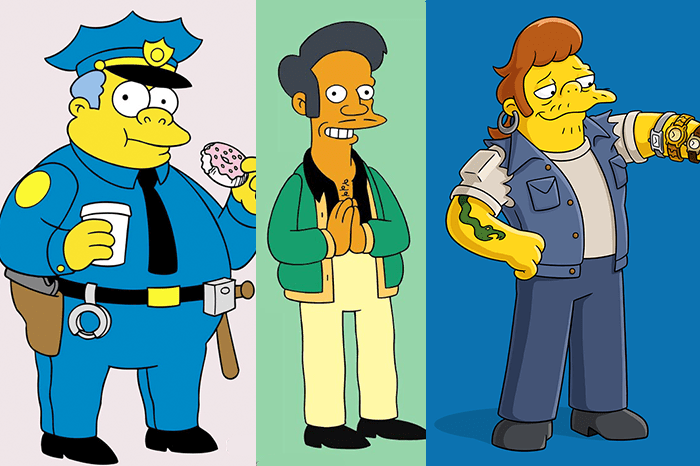 Hank has voiced countless “Simpsons” favorites over the years and he through the origins of many of his most popular characters for Howard.

On Apu: “Apu is just the best I could do of what I heard of kids growing up who were Indian and the guy who worked at the 7-Eleven near me in Los Angeles.”

On Snake: “Snake is a guy I went to college with. He was a guy who would take a lot of drugs and would report to you, unasked, on what he was experiencing on the drug trip, and he would come up and go, ‘Dude, I’m totally seeing colors now.'”

Of course, these characters all went on to become internationally recognized. “For a while, Moe and Chief Wiggum and Apu had bigger careers than I did,” Hank told Howard.

Catch the premiere of “Brockmire” Wednesday April 5 at 10PM on IFC.