Sal Governale Wants People to Get Out of Politics 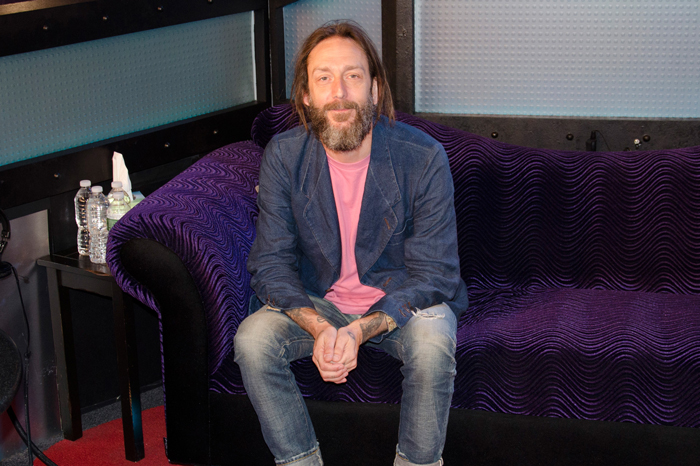 As the former frontman of the Black Crowes and the current leader of his own band, Chris Robinson has a résumé worthy of Rock and Roll Hall of Fame induction. On Tuesday’s Stern Show, however, the rocker explained to Howard why he’s not interested in becoming a hall of famer and won’t attend if ever invited.

“I’m not going. Look, Jerry Garcia didn’t go, I’m not going,” Chris said. “Rock and Roll Hall of Fame, to me, is like going to the mall or something.”

Howard wondered if Chris’s disinterest in being inducted had something to do with the contentious relationship between him and his brother, Black Crowes guitarist Rich Robinson. Though the two do not get along and no longer make music together, Chris made it clear he does not hate his brother—or anyone, for that matter.

“At the end of the day, I am so immersed and so happy with what we’re doing and our band is taking off,” he said of his new group, the Chris Robinson Brotherhood. “I’m doing exactly what I always wanted to be doing.”

Before delving into his more recent music, Howard jammed out with Chris to some of the Black Crowes’ biggest hits, including “Hard to Handle,” off the band’s 1990 debut album “Shake Your Money Maker.” While the song was a cover of an old Otis Redding classic, Chris revealed how an Aerosmith single also inspired the tune.

“I had the idea to sing it,” he told Howard. “[Our producer] George Drakoulias turned it into ‘Walk This Way.’ It’s the exact same beats per minute.” The experimentation paid off with “Hard to Handle” eventually hitting No. 1 on the U.S. Rock charts.

“She Talks to Angels,” another Black Crowes hit penned by Chris and his brother Rich, tells the story of a “goth chick” with a one-of-a-kind personality that Chris knew in Atlanta. He recalled once seeing her slam a beer bottle into another guy’s head after the guy hit on her at a bar. In 1991, “She Talks to Angels” captured the top spot on the rock charts, becoming the Black Crowes second No. 1 rock single.

Aside from his songwriting abilities, Chris also set himself apart from the rest of rock’s frontmen with his distinctive stage presence. Howard compared Robinson’s dance moves to Mick Jagger’s, who Chris called “the best frontman that has ever been [or] ever will be.”

As for putting on a great live show himself, Chris explained why he can’t take all the credit. “I truly only was as good as the band behind me and the crowd in front of me because that’s the energy,” he told Howard.

There’s a lot to be thankful for as a successful musician but more than the fame or fortune that comes from being a bona fide rock star, Chris points to the experiences he’s lived, including meeting some of his idols and influencers. Chris and the Black Crowes once teamed up with Led Zeppelin founder Jimmy Page for a concert tour and live album release—something Chris admitted scared him since he was tasked with singing the same songs the legendary Robert Plant once sang.

Another run-in with rock royalty happened backstage at a concert in 1990 when Chris and his brother were hanging out with Gov’t Mule’s Warren Haynes. Chris described how they were standing outside of Gregg Allman’s dressing room watching him comb his hair before he took the stage. Once he emerged, Warren tried to introduce Chris and Rich but Allman clearly wasn’t interested.

“As he walks past us, Warren goes, ‘Gregg, Gregg! This is the Black Crowes, the two brothers from Georgia I told you about.’ And he looks at me … and he goes, ‘Who gives a shit?’ And he walked past us!” Chris recalled to Howard.

Chris has also had the chance to meet rock icons like Joe Cocker, Ronnie Lane, and the members of Crosby, Stills, Nash & Young, all of whom knew his name. “I almost shit my pants,” Chris said of the experience.

Chris then told Howard about the night he met someone else very special to him—his wife Allison. They were introduced by a mutual friend after Allison attended a Black Crowes concert. At a party later that evening, Chris asked Allison what she thought of the show—she replied she found it a bit “tedious.”

“I had had a little tequila,” Allison told Howard once inside the Stern Show studio.

Howard asked if Allison’s criticism offended Chris that night. “Let’s say it didn’t deter me,” he answered. “We spent the night and we’ve been together every day ever since.”

Allison is now Chris’s manager and is helping him create the kind of music he wants to put out at this point in his life. Chris is consistently recording new music in his studio and told Howard he’s created his own cottage industry.

“Everything is in our scale, you know? We’re not in the music business,” Chris told Howard. “It’s straight from the source … we’re the farm-to-table band.”

With so many achievements to look back on, Chris told Howard his main motivation in life is simply joy and finding his own “authentic experience.”

“I’m a father, I have a beautiful family, I have this wonderful life and friends and this music,” Chris said.