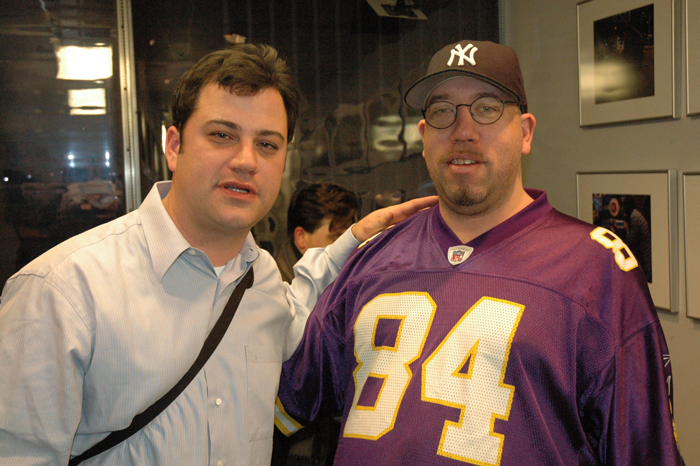 There’s a new famous fella catching the eye of Wack Packer High Pitch Erik—none other than late-night host and Stern Show celebrity superfan Jimmy Kimmel. While on the phone with Howard, Erik confessed to having sexual fantasies about Jimmy, the latest on his list of male celebrity crushes.

According to Erik, he has thought about what it would be like to star in a cop movie with Kimmel. The specific scene that plays out his mind involves him as an FBI agent searching Jimmy for drugs while he’s locked up in prison. But instead of discovering any contraband, High Pitch has his way with Jimmy.

Staffer Shuli Egar was the first to hear of Erik’s crush on Kimmel. “Erik admitted to me in private that he has masturbated to three guys,” Shuli told Howard. Jimmy was one, as was Donnie Wahlberg who Erik has pined over for years. The third dude getting Erik hot and bothered was his former podcast co-host Gonzo Shitcock.

Similar to his prison fantasy with Jimmy, High Pitch said he’d like to star in a “Blue Bloods” episode with Gonzo, one where he could tell him to “take his shirt off” and search him.

Howard didn’t doubt that Erik has had fantasies about all three men, but he remembered there being more male celebs on the list. After all, High Pitch has already come clean on having dirty thoughts about John Stamos. Shuli also brought up Fox 5 New York weatherman Mike Woods.

“Oh I love Mike Woods!” Erik exclaimed. But unlike the other guys he’s thought about, his dreams about the meteorologist aren’t sexual in nature. He only thinks about going on a Hawaiian vacation with Mike and laying out by the pool together.

“We just have so much fun laying next to each other because we both have hot bodies,” High Pitch said.

“A lot of people think Erik might be gay but he’s not,” Howard said with a laugh.

Robin Quivers wasn’t buying it, though, and questioned why there are no ladies involved in any of Erik’s sex dreams.

“Fortunately there’s no women to interfere in any of these fantasies,” Howard joked.

Hear a clip of High Pitch Erik describing his Jimmy Kimmel fantasy (below).