Wack Packer opens her doors to the Stern Show 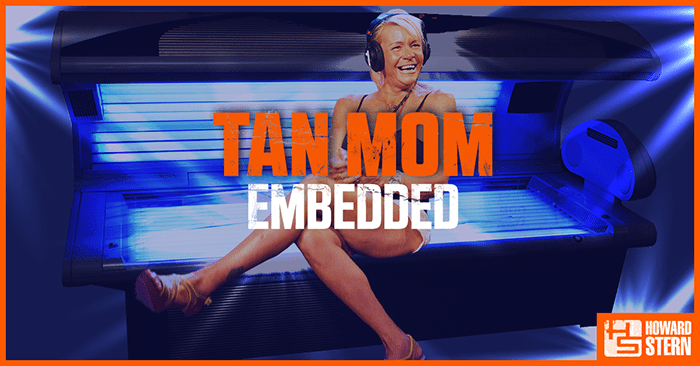 Patricia “Tan Mom” Krentcil has been gracing the Stern Show audience with her one-of-a-kind personality for five years, but much of her home life has remained a mystery up until now. That all changed Wednesday morning when Howard unveiled the Embedded special Stern Show staffer Memet Walker conducted with the Wack Packer recently.

Memet, or “Lemet” as he is known to Tan Mom, visited her at home and described the neighborhood as seemingly normal—but the same couldn’t be said for her house. “It looks like a haunted house when you walk up to it,” he told Howard. “It does look like the house from ‘Psycho.’”

From the minute Memet rang the doorbell and was greeted by Patricia’s husband, he could hear her yelling. Before getting started, though, he had to do a microphone check which turned out to be more difficult than expected. Memet simply asked Tan Mom to say, “Test 1-2-3,” but she had other things on her mind.

“This is Patricia. I hate marriage and my exes come around and stuff like that. But I just want to elaborate that my landscapers and everything haven’t done anything for me,” she said into the mic.

“It’s like interviewing someone on acid,” Memet told Howard.

After getting situated, Tan Mom gave Memet a tour of her house where she highlighted what she believed to be 19th century décor “from the war.”

Memet also met the family pet, a bunny named Sparky which she says she feeds sushi and pizza.

Considering Tan Mom’s unique perspective on the world, Memet wondered which publications she reads on a regular basis. “Where do you get most of your news from?” he asked.

“I have no idea what you said,” she replied, confused.

After clarifying he meant current events, Tan Mom contemplated the question before offering she keeps “reading 9/11 because it reminds me the world is falling apart so we can’t live in this disgust.”

Patricia invited Memet to observe her tanning routine, but first she packed snack bags for the crew consisting of matzah (though she is not believed to be Jewish.) The two then piled into a stretch limo driven by her husband, who she exclusively called “driver” for the duration of their trip to the salon.

“She has a specific bed that she absolutely loves,” the tanning salon owner told Memet when they arrived. “It’s the S-class. It’s a German-made bed … people get brown instantly after just one time,” he said, adding that it emits both UVA and UVB rays.

When Tan Mom hopped in the bed—naked save for goggles and tennis shoes—Memet said it felt like standing next to a nuclear reactor. Nevertheless, Patricia immediately went into a trance. “When the tanning bed turns on, her brain turns off,” he joked.

“Patricia, after she comes out of her tanning bed, she’s smiling, she’s in a good mood, she’s a different person. The UVB rays do that to people,” the owner told Memet.

Despite her eccentricities, the Stern Show staffer said “deep down she is a really sweet person who I really do like.” And the feeling is mutual, though Tan Mom did mistake fellow Stern Show staffer Steve Nowicki for Memet only days after they recorded the Embedded special.

But quite frankly, who really gives a damn? Certainly not Tan Mom.