“What you see on ‘Curb Your Enthusiasm’ is exactly how he is,” sportscaster says of David’s in-person demeanor 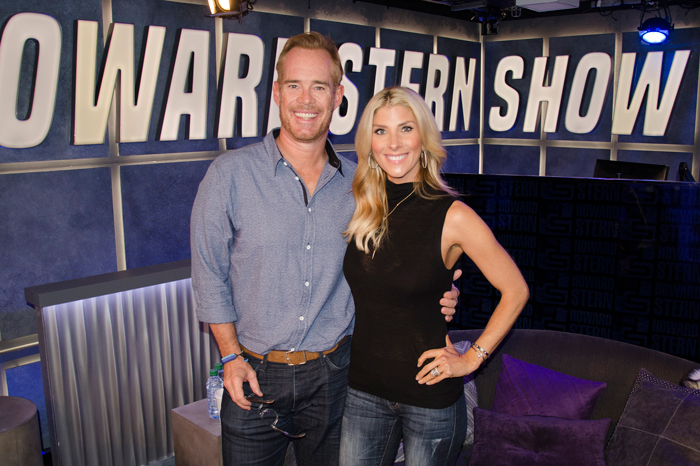 Politics and sports collided this past Sunday as NFL players, coaches, and owners throughout the country demonstrated acts of peaceful protest during the national anthem by locking arms, kneeling, or remaining in the locker room ahead of the game. Joe Buck addressed the controversy on Tuesday’s Stern Show, saying he was glad Fox decided to show the demonstrations.

“I’m proud of our network because … [we] do cover it,” Joe told Howard. “Typically, we don’t show the anthem unless it’s a big event.”

Howard wanted to know if Joe was given any specific directives on how to handle covering the national anthem protests. “I think Fox trusts me enough to know that I’m gonna come up with the right thing to say,” Joe replied.

As for his personal opinion on the matter, Joe explained he doesn’t pass judgement on anyone unless he’s walked in their shoes. “I don’t know what it’s like to walk up and wonder what a police officer’s thinking about me,” Joe continued.

He also shared his thoughts on Colin Kaepernick, the former San Francisco 49ers quarterback credited with starting the NFL demonstrations after he first sat for the national anthem during a 2016 preseason game. “Colin Kaepernick, it’s basically cost him his career,” Joe said. Howard wondered if Colin wasn’t on a team due to his lack of talent, but Joe argued he was never given the chance to win a job in the NFL since no team was even willing to bring him to training camp.

But with so many players now showing support for Kaepernick, Joe says the NFL and its teams have no choice but to support the movement as well. He pointed to Seattle Seahawks defensive end Michael Bennett, another pro who has been a vocal proponent of national anthem demonstrations. “If they cut him, 31 teams would go, ‘Come to us!’” Joe told Howard.

“I’m willing to sit there, watch it, describe it, and then go do the game,” Joe said. In addition to watching the national anthem, the sportscaster does something else before calling a big game. He told Howard from time to time he’ll have a beer right before the broadcast.

“I’ll sip it during the first quarter, the first couple innings, whatever it is, to remind myself to have fun, to relax,” Joe explained.

Buck also offered his take on ESPN sideline reporter Sergio Dipp and his recent on-air flub during Monday Night Football. “The moment kind of overtook him,” Joe said. “That that doesn’t happen more is amazing to me.”

Joe doesn’t think Dipp’s career is over, either. Far from it. “If he can laugh at himself, then sky’s the limit for him,” Buck said.

Even the best broadcasters in the biz make mistakes from time to time. Joe recalled for Howard something that happened to him just moments before the start of Super Bowl XLII between the New England Patriots and the New York Giants.

“I’m about to go onscreen in front of 112 million people,” Joe told Howard. But as he and his co-announcer Troy Aikman were about to go live, a cameraman warned Joe he had something in his hair. He ran to a mirror and found what he described as a “There’s Something About Mary” glob of gel sticking straight out. With time ticking down, Joe desperately tried to slather it throughout his hair.

“They’re counting down and I’ve got to run back in, plug back in, put the thing on, stand there, and go, ‘Hey, welcome to the broadcast everybody,’” Joe said with a laugh.

More recently, Joe made headlines after accidentally misidentifying golfer and 2017 U.S. Open champion Brooks Koepka’s current girlfriend Jena Sims as his former girlfriend, Becky Edwards. The wrong information came from one of Joe’s researchers (who will remain nameless), but he explained why he wasn’t all that upset by that guy’s gaffe.

“I’m on for eight hours a day for four straight days — do you know how many times he handed me a card that made me look smart?” Joe said.

According to Joe, part of preparing for any broadcast is not preparing too much. Study too many stats or facts and Joe says he can often “drown in information.” Instead, Joe tries to call the games in the moment rather than think about what he should say hours ahead of time. Evidently, Larry David does something similar ahead of shooting a scene for “Curb Your Enthusiasm.” He told Joe he tries not to come up with a funny line too far in advance for his sitcom in order to avoid missing other humorous moments.

The two TV stars met while attending sportscaster and “Dancing With the Stars” host Erin Andrews’ wedding. Joe confirmed Larry’s television persona and his real-life persona hardly differ from each other.

“What you see on ‘Curb Your Enthusiasm’ is exactly how he is,” Joe said of Larry.

For instance, during the outdoor wedding ceremony Joe remembered Larry complaining about the hot sun and saying he wished he’d worn a hat. But at the evening reception, temperatures dropped and Larry complained about being too cold.

“Now he’s shivering and they’re bringing him blankets and they’re putting small candles in front of him,” Joe told Howard while cracking up. “It was awesome. I mean, he’s such a great guy.”

When Joe’s wife wanted to get up and dance, he reluctantly agreed to go out on the dance floor with her but not before asking if Larry was going to be watching his every move.

“I said, ‘Now if I go out there, are you Larry David going to only watch me dance?’ And he said, ‘Absolutely,’” Joe told Howard.

Howard admitted he has the same fear about people watching him dance at weddings, so instead of delaying going out onto the dance floor and having everyone wonder when he’ll make his first move, he now goes out as early as possible and stays there the whole night.

“I might have to do that … you’re making my wife so happy,” Joe said.

Joe’s wife Michelle Beisner joined him in the Stern Show studio later in the interview. She is herself a sportscaster, working as a feature reporter for ESPN. Joe fell for her while she was working for the NFL Network, but before that she was a member of the Denver Broncos cheerleading team.

“Here’s the thing … the Denver Bronco cheerleaders wear chaps,” Joe told Howard. “She still has them.”

Howard had to ask: does Michelle ever wear her chaps for her husband? Turns out, she has showed off her moves in her old uniform for Joe, putting on a floor routine for him.

“If you don’t bring out the chaps for that then why do you have the chaps?” Michelle asked with a smile.

Hear Joe Buck during the NFL on Fox and tune in for Season 4 of “Undeniable with Joe Buck” premiering Oct. 18 on the Audience Network through DirecTV.