Her ascent to becoming one of music’s biggest stars has at times seemed unstoppable over the past year, but come July rapper Cardi B will need to take a break from her newfound fame and grueling work schedule in order to welcome her first child. The expectant mother made her Stern Show debut on Wednesday morning and revealed she’s having a baby girl. She also told Howard the baby’s name has already been selected although not by her.

“I didn’t pick the name so, if you interview my dude, he’ll tell you,” Cardi said with a smile.

Her dude is 26-year-old hip-hop artist Offset, best known for being a member of the group Migos. Cardi told Howard he would’ve hardly been her type, normally, since she tends to steer clear of rappers, but that they hit it off at an industry party one night in New York. The two went public with their relationship in 2017.

“It’s more than a relationship. We are planning to build a really big future,” Cardi said of hers and Offset’s romance. The two intend to get married eventually, possibly sometime next year. She told Howard her main reason for not wanting to walk down the aisle just yet is because she won’t be able to drink at her wedding while pregnant.

“I want to wear my dream dress and I want to get drunk on my wedding,” she told Howard.

Cardi’s career as a recording artist has already minted her millions of dollars but she told Howard she’s careful not to spend too much of her money on things she doesn’t need. “I know better. I’m always checking my bank account,” Cardi said. She and Offset also “clock” each other — pointing out extravagant purchases the other one makes, like diamond rings, flights on private jets, or the $260,000 Bentley truck Cardi told Howard she currently drives. Their next big purchase will be a shared house they hope to build soon in the Atlanta area.

She’s come a long way and lives a much different life than the one she knew growing up in the Bronx. After becoming a member of the infamous Bloods gang, Cardi eventually enrolled in a performance high school with the hopes of becoming a musician. She later attended college while working in a supermarket but told Howard no matter how many shifts she worked at the store, she couldn’t make enough money to support herself. Her manager then suggested Cardi start stripping at the club across the street from the market, telling her she had a body as good if not better than some of the girls who worked there.

Soon enough, Cardi was making thousands of dollars a night as an exotic dancer — she told Howard her biggest haul was $8,000 in one shift. The money was undeniably good but Cardi said she still struggled with feelings of shame whenever she stripped. “The imagery of my mom and dad came to my head when I used to give lap dances,” she admitted.

She also had to lie about where all of this money was suddenly coming from. “I told my parents that I was babysitting some really rich white folks’ kids,” she explained.

Not all strip clubs are alike, either, as Cardi learned while working in both white and urban clubs. According to her, establishments frequented by white clients featured mainly white girls, usually from Russia with breast implants. Urban clubs, however, put out girls with fuller figures and larger backsides. So that she could attract more customers and make more money, Cardi told Howard she enhanced both her breasts and her butt.

Life as a stripper wasn’t always easy but Cardi maintains life as a Hollywood star is actually more challenging. “This industry, I think, is way more cutthroat, way more dangerous,” she told Howard. Competition existed between girls in the clubs but nothing like the kind of competition Cardi said she faces as a female recording artist.

When Cardi’s monster hit “Bodak Yellow” knocked off Taylor Swift’s “Look What You Made Me Do” from the top spot on the Billboard Hot 100 last year, some media outlets invented a rivalry between the two. The story was a total fallacy that Cardi still can’t explain. Swift even sent her a bouquet of flowers to congratulate Cardi on earning her first No. 1 song.

Cardi has also had to quash rumors about a supposed feud she had with Nicki Minaj. She told Howard she ran into her fellow rapper at Monday’s Met Gala and resolved any issues the two might have. Cardi got to chat with Rihanna at the event, as well, something she said took a lot of courage considering how huge a fan she is of the “Umbrella” singer. 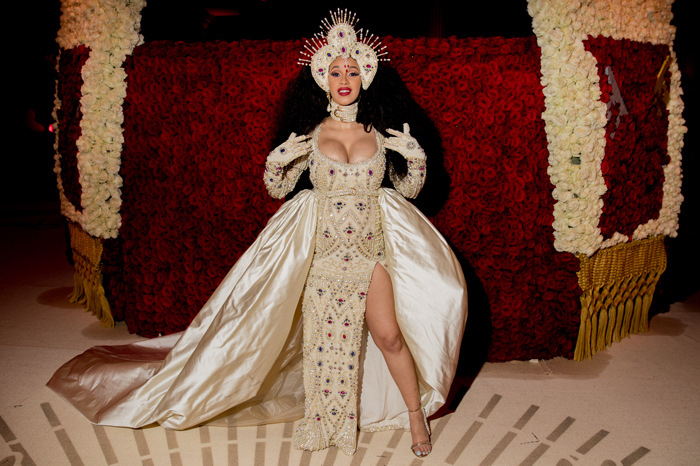 Cardi B at the 2018 Met Gala Photo: Getty Images

“I don’t like going up to people because I’m very shy, but I did [go up] to Rihanna and I told her that I love her,” Cardi told Howard. “I really feel in my heart that she really wants me to win.”

Howard wondered if Cardi was at all apprehensive to be attending something as high-profile as the Met Gala. She told him she gives herself a small speech before arriving to remind herself the stars she’s rubbing elbows with all night are people, just like her.

Unless of course you’re Beyoncé.

When Cardi met her idol for the first time, she admitted she actually lost the ability to speak. They met a second time when both Queen Bey and Cardi were on Coachella 2018’s lineup, though Cardi joked she felt a bit inferior after seeing Beyoncé’s much-talked about set.

“She made me feel real lazy,” Cardi said with a laugh, referring to Beyoncé’s complicated onstage choreography.

That’s not to say Cardi isn’t a hard worker in her own right. She’s already planning out her touring schedule for after she delivers her baby. “I’m taking one month off, or maybe three weeks,” Cardi told Howard. Then, it’ll be right back to making music and achieving the dream she’s been fighting for for so long.