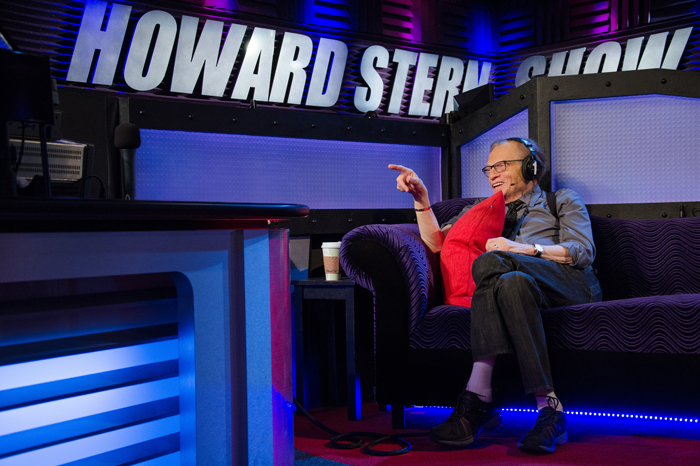 Larry King on the Stern Show in 2013 Photo: The Howard Stern Show

TV and radio icon Larry King is broadcasting from a brand new medium these days – an audio social media app called HearMeOut. That’s where he shares his thoughts and opinions about literally anything, no matter how basic the topic may be, in short segments he calls “My Two Cents.”

Recently Larry cut a special “My Two Cents” segment geared toward Howard himself, presumably after getting word that the King of All Media has mentioned the series on the Stern Show. Not only does Larry poke fun at being inducted into the Radio Hall of Fame 23 years ahead of Howard, he even name-drops handsome staffer Steve Nowicki. The clip ends with Larry urging Howard to start releasing his own clips on the HearMeOut app.

“He got a plug in,” Howard said as Robin laughed. “They tricked me.”

Take a listen to Larry King’s Stern Show-centric “My Two Cents” (below).

Before he began making audio recordings of his “My Two Cents” series Larry had long shared similar proclamations on Twitter. Back in 2016, Howard caught wind of Larry’s opinionated tweets and even put out a few of his own. Check out a few of Larry’s #My2Cents thoughts (below).