The Stern Show opened with a bang Monday morning after one eagle-eyed fan accused Ronnie Mund of committing a previously unreported offense on Twitter.

This latest blunder centered around the poster for Ronnie’s upcoming Halloween-themed strip club appearance. “Ronnie had his head photo shopped on Dean Cain’s body for his 8×10 photo!” the man pointed out.

Ronnie, meanwhile, pleaded ignorance and insisted he didn’t know who manipulated the photo, despite the fact that it has been used to promote his personal appearances for at least five years. “This is going back from block party shows,” he said. “I didn’t claim I posed for it, but I was wearing the same kind of shirt and everything.”

Similar to the defense he used when confronted for retweeting a disparaging message about Howard earlier this month, Ronnie added he hadn’t really looked at the photo all too closely.

Staffer Chris Wilding didn’t buy Ronnie’s explanation, though. “It’s a fib. It’s a lie. Just own up to it,” he demanded. “We got you, man—dead to rights.”

Ronnie was incensed by the accusation and fired back in defense. “I didn’t have anything to do with the picture, you fool!” he screamed. 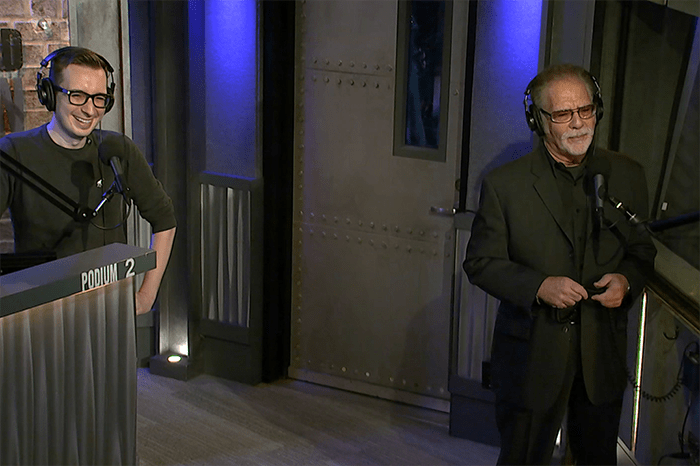 Whether or not Ronnie was aware of the body swap, the irony of using an actor who once portrayed Superman was not lost on his co-workers. “Why not use Dean Cain’s head, too?” Howard asked with a laugh.

In an even more shocking admission, Ronnie told Howard he would also continue retweeting the image until his strip club appearance on Friday, despite the controversy. And he’s not apologizing to Dean Cain, either.

In response to the revelation, Stern Show fans shared a few photoshopped images of their own. See just a few (below):