New episodes of the comedian’s show “I Love You, America” are available now on Hulu

As an acclaimed comedian herself, Sarah Silverman has spent her fair share of time in the company of other comedy greats over the years. During her appearance on Monday’s Stern Show, Sarah told Howard about her stand-up album “A Speck of Dust” being nominated for a Grammy in 2018 alongside some of the biggest names in the biz: Kevin Hart, Jerry Seinfeld, Jim Gaffigan, and the award’s eventual winner, Dave Chappelle. Howard wondered if Sarah was upset to lose to Chappelle that night.

“Of course not. He’s my brother. He’s a genius,” Sarah said, explaining she and Dave have known each other since they were teenagers. “I met him when he was in high school. He was 17 and I was 19.”

Even back then, Sarah recalled how Chappelle had written fully fleshed-out bits that were brilliant, especially so when considering they were crafted by someone as young as he was at the time. The two have remained close friends ever since and she told Howard losing the Grammy to him didn’t bother her at all, though she did admit she had a good speech prepared if her name did get called.

Sarah also talked about her admiration for comedy icon Steve Martin, whom she recently spent time with after the American Film Institute’s tribute to Diane Keaton. Steve invited a who’s who of Hollywood A-listers back to his home following the ceremony, including “Murphy Brown” actress and frequent “Saturday Night Live” host Candice Bergen. After Martin Short asked Candice to tell the group how she first met Steve, she shared one of her earliest memories of him was how he used to not know what prosciutto was.

“And then Steve, right then, goes, ‘Can you believe it? And now I drive one!’” Sarah recalled. “It was so in the moment, organic. You could spend 10 years trying to write a joke that perfect.” 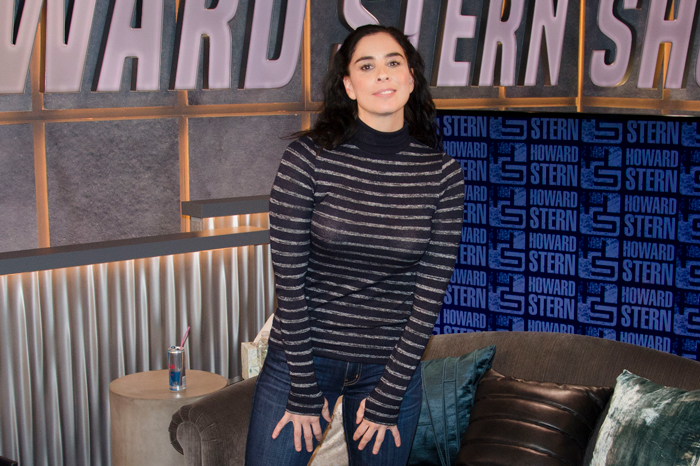 Writing jokes is something Sarah is always doing. She even pulled out her phone for Howard and read a few observations she’s jotted down lately, like how funny she found it that a hotel pool she was at hung a sign forbidding anyone from swimming who’d had diarrhea in the last two weeks. She also made a note about a toilet paper commercial she saw recently where a woman asked people if they felt clean enough after wiping to “go commando.”

“It blew my mind because … do you wear underwear to keep from getting shit smears in your pants?” Sarah said with a laugh. “My asshole is so immaculate.”

Early in her career, Sarah told Howard someone advised her to try and make just the guys at a comedy club laugh because so long as they laughed, their girlfriends would laugh, as well. “I accepted so much of this bullshit,” Sarah said. “I didn’t trust my own power for many, many years and I see younger women now doing that and it’s exciting. It’s like, the times are different, you know?”

But time has also made Sarah take a second look at her own comedy from the past, some of which she admits to being offensive now. “Comedy is certainly not evergreen,” she told Howard. “We can’t erase it, we can’t delete it … you can only be changed by it.”

There’s no doubt incidents from the past have changed Sarah’s friend and fellow stand-up Louis C.K. following a 2017 New York Times report where several women accused him of sexual misconduct – accusations Louis C.K. has admitted are true. Sarah made it clear she knows Louis acted inappropriately but told Howard the controversy is not something she can easily comment on, though she gets asked about it regularly.

“It’s all very black and white until it comes to your front door and the bad guy is someone you love,” Sarah explained.

“I believe he has remorse, I believe he can come back, I just want him to talk about it on stage,” she continued. “Comics don’t like to be told what to do so he’s just going to have to find his way or not find his way and people are going to watch him or not watch him.”

Sarah is now single after she and boyfriend Michael Sheen decided to go their separate ways, but the two are still on good terms. “I love him, though,” she told Howard.

She also remains close friends with her ex Jimmy Kimmel whom she dated for several years. “When I see him, it’s so fun,” Sarah said of Jimmy on Monday.

The former couple even went on an impromptu “double date” of sorts recently after Jimmy and his now wife Molly McNearney wound up at the same event as Sarah and her business partner Amy. The foursome grabbed dinner together afterward and Sarah told Howard there was nothing uncomfortable about being with her old boyfriend and his new significant other.

“We laugh … it’s just very fun to be with him, to be with both of them. I had a really nice time,” Sarah said.

Sarah’s been sitting down for several potentially awkward meals as of late thanks to her TV show “I Love You, America” which returned to Hulu last month. In an effort to connect with people from all walks of life and from all over the country, Sarah not only welcomes guests into her studio for wide-ranging interviews, she also goes out in search of unique stories and perspectives from people who might not share the same opinions she does. In a recent episode, Sarah had dinner with a Mormon family at their home in Wyoming and talked politics, religion, and their day-to-day lives.

Sarah knows she’s not going to change the minds of everyone she meets, nor is that her goal. Instead, she hopes both she and those she interviews can listen and learn from each other.

“Clearly I don’t need everyone to love me. I mean, I’m wildly divisive,” Sarah said with a laugh.

Watch Sarah Silverman on her show “I Love You, America” streaming now on Hulu.