“Homeland” star Claire Danes revealed some breaking baby news during her Stern Show interview on Wednesday – she and husband Hugh Dancy are expecting their second child.

“I am pregnant … I am deep into my second trimester,” Claire announced to Howard. “You’re the first person I’ve told.”

“I’m so honored,” Howard told his guest. “Would you name the baby Howard if it’s a girl?”

Claire shared her happy news while discussing a recent love scene she shot for her TV series early into her pregnancy. Howard watched that episode of “Homeland” and told Claire he couldn’t tell at all that she was expecting.

On-camera nude scenes are nothing new for Claire, who described what it’s like to undress down to nearly nothing on the set. “You have little pasties on your bits and they clear the set and then you disrobe and then you start writhing after they call action,” Claire said with a laugh. Only a few others are even allowed on the set with her: the director, the director of photography, and, of course, Claire’s scene partner. Her most recent love scene was with co-star Morgan Spector.

“I feel safer in that environment than probably any other,” Claire told Howard. “I was in fine company. You just have to laugh.” 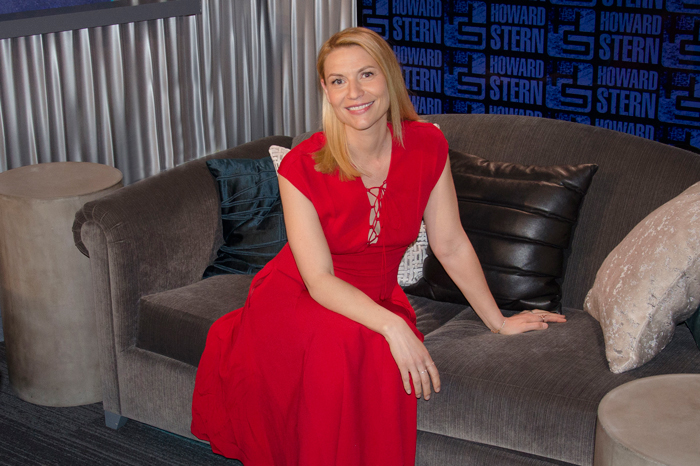 Claire kept her clothes on for her romantic moments with Jared Leto on “My So-Called Life” but she told Howard how incredibly awkward it was kissing the then 20-something heartthrob when she was just 14.

“At the time, he seemed ancient,” Claire said of Leto, though she told Howard she found him to be “shockingly good looking.”

A script direction once instructed her character Angela to kiss Leto’s face which, at the time, confused Claire since she had only ever kissed boys on their lips before that. Jared had to coach her through how to be believably passionate with him once cameras started rolling. The two shared a more platonic friendship off the set, as well.

“He brought me to my first club when I was, I guess I was 14,” Claire said. “He was very fraternal with me.”

Oscar winner Jodie Foster also took Claire under her wing while the two were shooting the 1995 film “Home for the Holidays” which Foster directed. Jodie’s advice to Claire, as one Hollywood actress to another: always ask the movie studios for more money – they always have more money to give but only if you ask for it. Claire told Howard she’s grateful for Foster’s guidance and for the valuable tip.

“We went to the same high school, we went to the same college, we were both kid actors,” Claire said of Jodie. “She had a lot of empathy for me because she, you know, recalled her own experience being a little person kind of bumbling through this industry.”

Claire followed in Jodie’s footsteps attending Yale University between 1998 and 2000. Though she didn’t graduate, Claire said she learned plenty during her time at the Ivy League school. “It felt sufficient,” she told Howard.

And though she was already world-famous by the time she got to campus, Claire said her fellow classmates weren’t distracted by her celebrity for long. “Yale is more famous than any student could be,” she explained. “I think it gets boring pretty fast.”

Claire lived in one of Yale’s residence halls and had a seemingly normal college experience while enrolled. “Mostly I just, like, smoked pot and played Mario Tennis with my friends,” she admitted. Her roommate Allison coincidentally ended up being recruited and working for the C.I.A. – something that’s come in handy for Claire and the development of her “Homeland” character Carrie Mathison.

The Season 7 finale of “Homeland” airs later this month with Season 8 already planned to be the series’ last. Claire said she’s conflicted to see her acclaimed TV show come to a close.

“I’ll be ready. She’s a lot, this Carrie freakin’ Mathison,” Claire said of her bipolar, counterterrorism expert character. “I’ll be ready for a reprieve from that.”

But aside from being married, Claire told Howard she’s never done something for as long as she’s starred on “Homeland.”

“I think it’s gonna take me a second to just recover and figure out where I would want to go next,” she said.