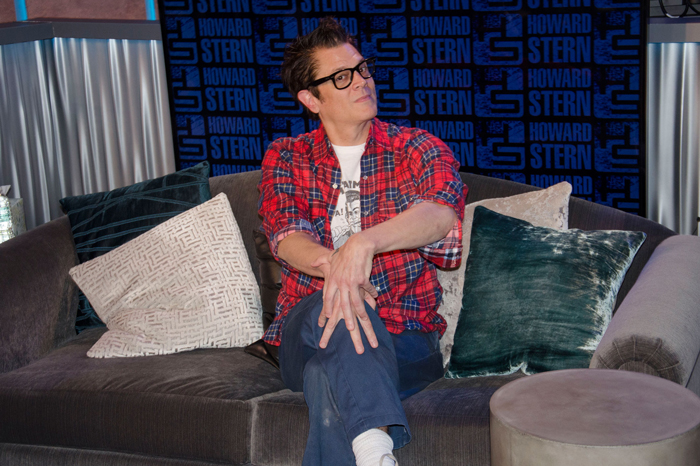 Not only are all of the stunts in Johnny Knoxville’s new movie “Action Point” real, all of the injuries he sustained are, too. He stopped by the Stern Show on Monday morning and told Howard about how much he got hurt while shooting scenes for the film, including one literally eye-popping story from the set.

“I was injured more on this movie than any movie I’ve ever done,” Johnny told Howard. One stunt called for Knoxville to crash-land off an alpine slide while traveling down it at full speed — he wound up with a concussion and memory loss for part of the day, but even after E.R. doctors sent him home to rest, his suffering was far from over.

Back in his hotel room, Johnny noticed some blood in his nose. “I blow my nose and when I blow my nose, my left eyeball comes out of its socket,” he recalled. Unsure of what to do, Johnny said he simply pushed his eye back in but experienced “crazy double vision” afterward. The eye came out a second time while he was walking around town with his friend and co-star Chris Pontius.

Howard wondered if Johnny has a higher threshold for pain than the normal human being. “My pain tolerance, I think, is the same as everyone in the room,” he explained. It’s what he called his “give-a-shit tolerance” that helps him surpass pain levels most people aren’t able to endure.

“I just want footage. And I know what I’m about to do is going to hurt and I don’t know how it’s going to end but I override whatever fear is in me so I can get footage,” Johnny continued.

The shooting schedule on “Action Point” was designed so that the most dangerous stunts were held until the end of the film’s production. That way, when the time came, Johnny could give those high-risk stunts his all.

“I want to make it as big a disaster on the first take and fully commit,” he told Howard. 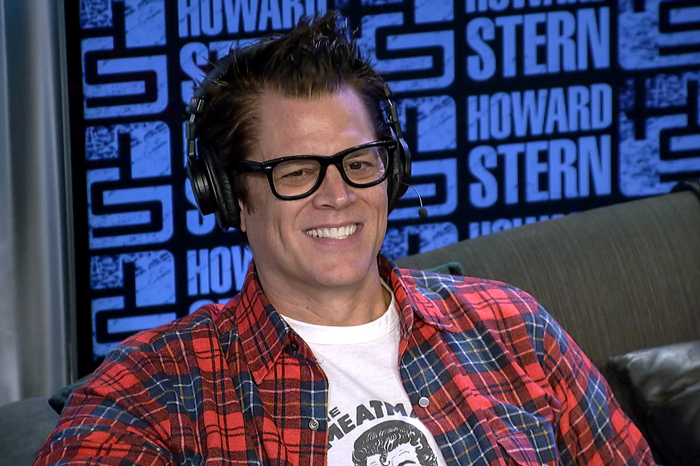 He expected the same from the stunt crew on this movie and asked all of them to shoot their scenes without pads or protection. “They never get to do stunts like that so they were ecstatic,” Johnny said of the stuntmen and women he worked with, though he did admit some were “carted off” of the set. “We were all in it together, you know, and I respect them so much.”

Putting his body (and his life) at risk is nothing new for Johnny. He and Howard reflected back on how his one-of-a-kind career got started in the ‘90s after the birth of his first daughter.

“Nothing took off until that moment I had to provide for a family,” Johnny said about his motivation to make it in Hollywood. He had originally wanted to become a traditional actor but then began taking gigs as a guest writer for various print outlets. He eventually started pitching an idea he had to review self-defense equipment, offering to test out stun guns, a taser, and even a bulletproof vest on himself.

“They all liked it but didn’t want to be involved because of the gun,” Johnny said. Howard was one of those people interested in what Johnny was willing to do and recalled getting a letter from him while the Stern Show was still at K-Rock. Station management shut down the idea of having Knoxville come on the air to perform the stunts, though, for fear he’d wind up seriously hurt or possibly dead.

The one place that expressed interest in Johnny’s idea was Big Brother magazine and its editor at the time, Jeff Tremaine, who would go on to co-create the “Jackass” concept for TV with Knoxville. Tremaine was willing to work with Johnny, so long as he could film the stunts as they happened.

When it came time to finally fire at Johnny in his bulletproof vest, no one wanted to be on the other side of the gun. It was up to Johnny to shoot himself but moments before pulling the trigger, he told Howard how the photographer there that day shared a story of someone who had died while doing the exact some stunt.

“He took that moment to tell me that that happened. I’m like, ‘How about a little positivity, people?’” Johnny said with a laugh.

It wasn’t long before “Jackass” was being shopped around as a television pilot, eventually landing on MTV in 2000 and turning Johnny and the rest of the cast into overnight celebrities. The executives at MTV weren’t the only ones interested in Johnny’s star power, either. Knoxville turned down an offer from Lorne Michaels to be a full-time cast member of “Saturday Night Live.”

“It was a wonderful opportunity. I appreciated what a great opportunity it was,” Johnny told Howard, adding how Michaels promised him three to five minutes each show in which he and his pranks would be featured on the long-running late-night series. But in addition to losing complete control of the project, Johnny would also have to give up working with all of his “Jackass” friends, something he ultimately wasn’t willing to do.

Betting on himself and the “Jackass” pilot paid off — the TV show led to several spinoff series as well as three feature films. Johnny gave Howard the backstory on one of the show’s most infamous stunts which involved Knoxville dressed up as an escaped convict asking a hardware store to cut his handcuffs off for him. Johnny’s getup and performance must have been a bit too believable since store employees eventually called the cops.

“The goal wasn’t for the police to pull their guns,” Johnny told Howard. But that is precisely what happened. One officer was so quick to point her weapon at Johnny, she forgot to put her cruiser in park and the car crashed into a telephone pole.

That same officer later told Johnny had he moved one muscle during the prank, she was ready to put a bullet in his head. Luckily, Johnny eventually told everyone on the scene it was all a goof and no one was harmed that day. At least not physically.

“Because of that stunt, they shut down the pilot for a few days,” Johnny told Howard. “And MTV couldn’t film in the city of West Hollywood for 10 or 15 years after that.”

Millions continue to flock to theaters whenever Johnny comes out with a new movie, but he told Howard it took him a while before he was comfortable showing any of the “Jackass” films to his eldest daughter. He finally allowed her to see “Jackass 3D” when she was 14 but insisted on sitting next to her so he could warn her about the movie’s upcoming scenes.

“I said, ‘At certain parts you have to cover your eyes, cover your ears, or cover both.’ And she did,” he told Howard.

As for his 8-year-old son and 6-year-old daughter, they’re still several years away from seeing most of Johnny’s work. “They know that I make movies,” Knoxville said. When his two youngest were visiting him at work one day, they spotted a photo hanging on his wall of Johnny being trampled by a buffalo. He told Howard he had to quickly cover and said to them, “That’s just daddy having fun with his friends.”