In the three years since Gwyneth Paltrow was last on the Stern Show, Hollywood has entered into a new era that has seen some of the industry’s most powerful figures fall from grace due to past transgressions. In 2017, more than a dozen women accused producer Harvey Weinstein of sexual harassment, sexual assault, or rape in reports published by the New York Times and The New Yorker magazine. Paltrow opened up to Howard on Wednesday about her own experiences with Weinstein and her involvement in the reporting that uncovered what had remained secret for so long.

“It’s just been astonishing to see what’s happened in the ensuing year since that article came out,” Gwyneth said of the Times report penned by journalists (and now Pulitzer Prize winners) Jodi Kantor and Megan Twohey. Kantor reached out to Gwyneth in the summer before the article was published to ask about an incident she had with Weinstein several years ago.

“It was a really big decision,” Gwyneth told Howard about choosing to take Kantor’s call. While Weinstein no longer holds the position of power he once did, Gwyneth told Howard she of course had to consider what he might do in retaliation to her speaking out.

“We had one instance in a hotel room … where he made a pass at me,” Gwyneth said. It occurred early on in her career before she had become one of the most recognizable movie actresses in the world. “It was out of the blue and I’ll tell you, I had been having the most incredible experience at Miramax,” she continued. “I was blindsided.”

Gwyneth not only refused Weinstein’s advances she told Brad Pitt, her boyfriend at the time, what occurred. While at the 1995 opening of “Hamlet” on Broadway, Gwyneth says Brad confronted Weinstein face to face, making it clear that if he ever touched her again, he’d be sorry.

“It was like the equivalent of throwing him against the wall,” Gwyneth said of Brad’s actions. “It was so fantastic because what he did was, he leveraged his fame and power to protect me at a time when I didn’t have fame or power yet.”

The message was received. “Harvey was never inappropriate with me again. Ever,” Gwyneth told Howard. However, their working relationship remained one with many moments of contention. “Power was his currency and he knew when to, you know, give you something and take it away,” she said. “I did put it behind me but … our professional relationship was pretty fraught at times.”

After winning an Academy Award for her performance in 1998’s “Shakespeare in Love,” Gwyneth thanked Harvey Weinstein, a producer on that film, though he was hardly whom she had at the forefront of her mind that night. Sitting in the audience with her were her parents, actress Blythe Danner and director Bruce Paltrow. Her father was battling cancer at the time and had undergone surgery and radiation to treat the disease. When Gwyneth’s name was called, she delivered a tearful acceptance speech she told Howard she hadn’t written a word of ahead of time and still hasn’t watched back to this day.

“I think I had so much emotion and so many different kinds of emotion … I couldn’t contain it,” she admitted.

Returning to her seat, Gwyneth said she noticed her dad was acting strange, not looking her in the eye or responding when she tried to talk to him. “He said to me, staring forward, ‘Don’t look at me or speak to me. I’m hanging on by a thread,’” Gwyneth remembered. “He was, like, about to burst into tears.”

Gwyneth thanked her mom on Oscar night as well even though Blythe had long discouraged her daughter from becoming an actress like her. She didn’t listen, however, and secretly auditioned for a part in the movie “Reversal of Fortune” at just 17 after a casting director spotted Gwyneth smoking on the streets of New York while wearing her private high school uniform. The role didn’t go to Gwyneth and she told Howard she finally understands where her mother was coming from, since she’s currently in the same situation with her own daughter Apple.

“As a mother now of a daughter who wants to act, I think it’s really important to let people have their childhood,” Gwyneth said, adding that just like her mother, she’s trying to steer Apple clear of a career in show business. “How often, honestly, do those child star stories work out?”

Apple and her brother Moses are Gwyneth’s children with Coldplay frontman Chris Martin, whom she split from in 2016. Keeping their family intact has remained of utmost importance to both Paltrow and Martin who’ve become a model example for how to successfully co-parent following a divorce.

“The question becomes how much of your ego are you willing to check at the door and can you let go of spite because if you can do those things you can absolutely have a friendly divorce,” Gwyneth said. That’s not to say she and Chris haven’t encountered challenges along the way. 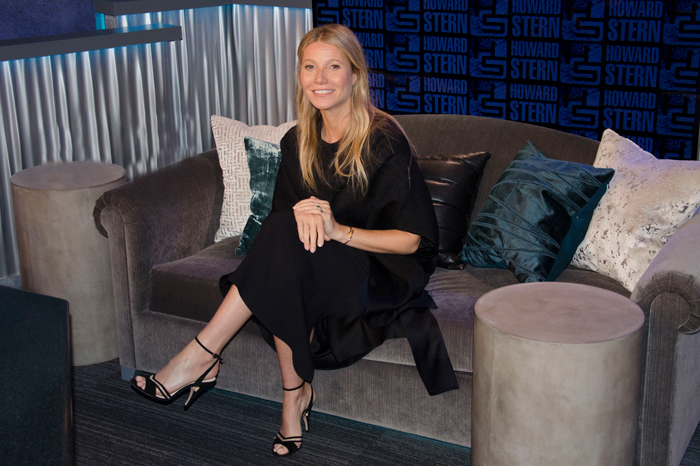 What makes their new situation run smoothly is their shared values and goals for their kids. “Chris and I are lucky because we really agree fundamentally about how to raise the children,” Gwyneth said. “We have a really great relationship.”

The new man in Gwyneth’s life is TV producer Brad Falchuk, famous for co-creating hit shows like “Glee” and “American Horror Story” alongside Ryan Murphy. Gwyneth first met Falchuk several years ago while guest starring on “Glee” – a role which won her an Emmy Award in 2011. After she and Martin separated, Gwyneth told Howard her friendship with Falchuk evolved into something more and the two began dating each other exclusively. They announced their engagement earlier this year.

“I think that there’s something really beautiful about marriage,” Gwyneth said of why she wants to wed Falchuk, telling Howard their relationship deserves a “proper shot.”

Falchuk has two children of his own who happen to be the same ages as Gwyneth’s kids. There won’t be any new additions, either, according to Gwyneth. “Neither of us want more kids. We’re on the same team,” she told Howard.

As for when they’ll walk down the aisle, Gwyneth said it’s yet to be decided. “I think we’re trying to figure it out,” she said. “It’ll hopefully be this year.”

She expects the eventual wedding ceremony to be small with only family present. “We had a big engagement party … that was the big thing,” she told Howard. One might assume an A-lister like Gwyneth would have only famous friends but that’s not the case. She told Howard out of the 300 people at the engagement party only four of them were celebrities: Jennifer Aniston, Cameron Diaz, Kate Hudson, and Reese Witherspoon.

Gwyneth continues to act in movies here and there, including her appearances as Pepper Potts in most of Marvel’s “Avengers” movies. But she says her primary job now is as an entrepreneur. Her lifestyle brand Goop has been in business for nearly a decade with continued success each year.

“We’re growing. We’re getting there,” Gwyneth said, telling Howard Goop’s staff now boasts almost 200 employees. “I am very involved in the day-to-day. I’m in the office every day.”

As the driving force behind the company’s goals and vision, Gwyneth told Howard she experiences a sense of exhilaration similar to the one she’d get while shooting a big-budget film. And though Goop has become her new passion, Gwyneth realizes she most likely could not have taken the company this far without her fame as a Hollywood actress.

“I was able to start Goop because I had that platform as an actor and I wouldn’t change anything,” she told Howard. “It’s a totally fantastic job.”