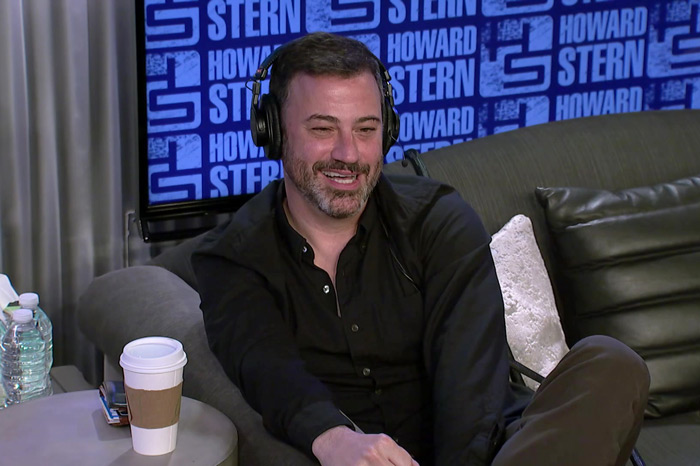 There will be no pasta dinners nor tours of world-famous museums for Howard and Jimmy Kimmel this summer. Though the two planned on vacationing in Italy along with their wives, Howard revealed recently he needed to postpone the trip due to his hectic promotional tour for his new book, “Howard Stern Comes Again.”

“It’s now all I’m asked about,” Jimmy said with a laugh on Monday during his latest visit to the Stern Show. Several have suggested he should try harder to get Howard on the plane since they think a European vacation will be good for him.

“What am I gonna drag you to Italy by your feet?” he continued. “It’s like you have a disease and they want to see you cured.”

But that’s not to say Jimmy isn’t still hopeful he’ll be able to get Howard to Italy someday. He and his wife Molly have decided to skip the Italian trip themselves this summer and won’t make the journey unless Howard and Beth are with them.

“We are not going to go without you. We’re gonna wait until you’re ready to go,” Jimmy stated.

With a schedule like Jimmy’s, finding time to unwind is critical. He told Howard he gets to the office around 10 a.m. and is busy all the way up until he’s finished taping the show, around 6:45 p.m. Even when he’s not in the office, he still feels like he’s at work.

“There’s not a minute of downtime,” Jimmy said. “When you’re doing a show every day, you never really stop thinking about what you’re gonna do on the show. Never.”

That’s especially true when you work with your significant other – Molly also serves as the co-head writer on Jimmy’s ABC show. “I think it’s actually great that we work together because our schedules are exactly the same,” Jimmy told Howard.

The couple have two young kids together – four-year-old Jane and two-year-old Billy who was born with a congenital heart defect and required surgery just days after he arrived. Howard asked how Jimmy’s son was doing now.

“He’s good. Bit me right on the nipple the other day,” Jimmy replied, explaining he was simply holding the toddler in his arms when he suddenly felt a strong pinch. “If only I had this on video, you’d watch it a million times in a row … the sound I made I’ve never made before in my whole life.”

Jimmy’s show keeps him busy, but he told Howard he’s lucky to have time in the morning and a couple hours at night to be with his kids. “It’s like any other job. I mean, I have the same hours that my father had,” he said.

It’s not just his own late-night show Jimmy has been working on lately, either. He’ll soon be bringing creator Norman Lear’s iconic sitcoms “All in the Family” and “The Jeffersons” back to TV in two live specials for ABC. Both will be restaged classic episodes and feature an all-star cast including Jamie Foxx and Wanda Sykes as George and Louise Jefferson while Woody Harrelson and Marisa Tomei will play Archie and Edith Bunker.

It was actually Lear’s idea to cast Woody in the iconic role and Jimmy asked the three-time Oscar nominee himself if he’d be interested in participating in the one-night-only special.

The live TV event is happening May 22 and is being co-produced by Will Ferrell, Justin Theroux, and “The Big Short” director Adam McKay.

With his Las Vegas comedy club recently opening, his restaurant ventures, and the return of his Comedy Central show “Crank Yankers,” Howard wondered if Jimmy is maybe working a bit too much these days.

“Sometimes I don’t like to tell you these things because I know they’re going to give you stress,” Jimmy joked.