With “Howard Stern Comes Again” now officially on sale around the world, Simon & Schuster’s president and publisher Jonathan Karp stopped by the Stern Show to celebrate the big day and discuss what it was like working with Howard.

“You had been my white whale. I had been pursuing you for about 12 years,” Karp told Howard.

The idea to do a book covering some of Howard’s best Stern Show interviews had long been suggested to Jonathan. From an editor friend at Rolling Stone to his own sister (a devoted Stern Show superfan), the concept was constantly being brought up to him. When Howard finally agreed to sit down with Simon & Schuster, Jonathan said there was only one thing he was nervous about before his meeting with the King of All Media.

“I was most nervous about not shaking your hand,” Karp revealed with a laugh, adding many of Howard’s listeners had warned him ahead of time not to do that.

Though their initial talks about the book went well, it was still several more months before Howard agreed to get to work on the project, saying on Tuesday it wasn’t until Jonathan told him this book would become a part of his legacy that he was convinced to start writing.

“That was real important to me,” Howard said.

“This is gonna last,” Jonathan added. “It is genuinely inspiring.” 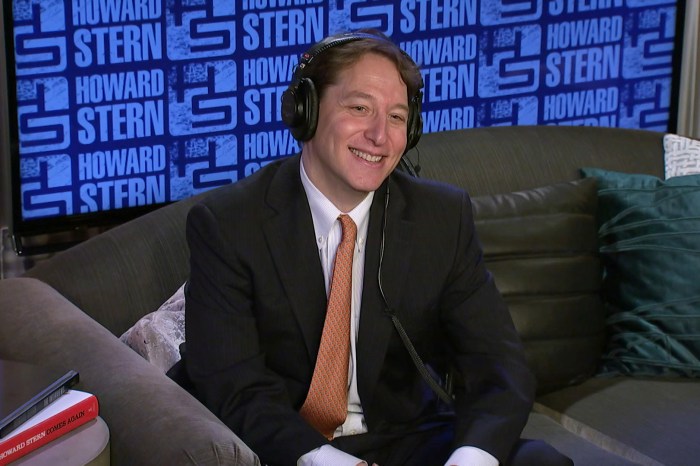 It took two years and seven drafts before Howard felt his book was ready to go to print, a timeframe Jonathan admits was longer than he’d anticipated. He joked even Charles Dickens was able to write “Great Expectations” in eight months.

“You were right to persist,” Jonathan told Howard, calling the finished product “kaleidoscopic” in its approach to capturing these candid conversations from the Stern Show.

Jonathan’s first foray into publishing the words of others came while he was a student at Brown University. With his ability to type 100 words per minute, he started his own one-man business transcribing his classmates’ term papers for cash. After graduation, he continued to write for a living, first as an editorial assistant and then a newspaper reporter, never imagining he would one day work in book publishing.

“I love to read and I love coming up with ideas for books and it just sort of naturally happened,” he explained.

Howard Stern is hardly the first household name to have a book published by Jonathan – he’s also worked with Bruce Springsteen, Hillary Clinton, John McCain, and Donald Trump. His time as acclaimed author Mario Puzo’s editor extended to the very day the “Godfather” writer died. Jonathan recalled how he’d just received a finished manuscript from Mario before driving out to his house on Long Island to be by his side at his deathbed.

“I held his hand and I told him that the book was good,” Jonathan told Howard. “His family said he needed to hear that in order to let go.”

And while Puzo’s fiction was filled with violence and crime, Jonathan described the author as being the complete opposite of his mafioso characters. “He was the gentlest, sweetest man I knew at the time.” Jonathan said of Mario.

“Who are you after now?” Robin Quivers asked of which A-lister Jonathan hopes to work with next as his time working with Howard comes to an end.

“That’s a great question. It’s gonna be very hard to top,” he replied.